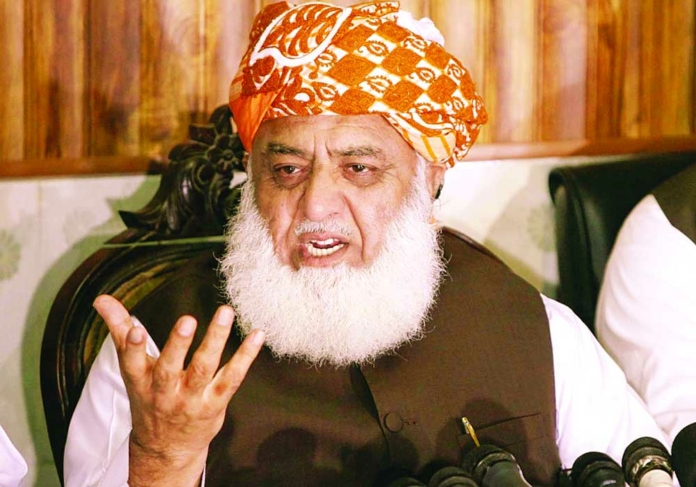 Jamiat Ulema-e-Islam (JUI-F) Amir Maulana Fazlur Rehman on Wednesday said that Pakistan Tehreek-e-Insaf (PTI) government was not removed via a conspiracy rather it was “brought” through a conspiracy, saying that the former prime minister Imran Khan will never be able to get into power again.

“We removed him from power… Imran Khan’s anti-national agenda will never be fulfiled. We are dealing with such a strange person that he’s contesting elections from nine constituencies,” he said during a rally in Mela Mandi, Takht Bhai. Fazl said that Pakistan was on the verge of economic bankruptcy under the PTI government. “The state was at stake but we saved the country… the conspiracy was indeed hatched but to bring him into power, not to remove him,” he added.

Fazl, who also heads the Pakistan Democratic Movement (PDM) alliance of ruling parties at the Centre, said that Imran came to power with the backing of the United States and with funding from India and Israel, adding that the Election Commission of Pakistan (ECP) has revealed PTI chief’s “theft”. The JUI-F amir alleged that Imran sold Pakistan to IMF and for this reason he was brought into power. “Imran tried to fail the CPEC project at the behest of America… he himself is a US agent, why would it conspire against Imran,” he questioned. Fazl said that the former premier should retrospect first instead of criticising the coalition government. “I wonder how Pakhtuns are in the party with this person [Imran],” he remarked.

Separately, Awami Muslim League chief Sheikh Rashid Ahmed said that if the situation worsens, politics and politicians both may get into trouble. He said that if Pakistan Muslim League-Nawaz’s (PML-N) desired army chief is not appointed, the “partnership” it is having will break, in an apparent reference to the establishment. “The law will bring Nawaz Sharif to Pakistan or drive away more criminals, we need to wait for it. With NAB’s amendment, thieves have been given free hand and justice has been given the death penalty,” he wrote on his Twitter handle.

Rashid said that Moody’s has cut the rating of five more banks, adding that if the situation worsens, politics and politicians both may get into trouble. The statement comes as a debate rages in national media and political circles on possible successors to incumbent Chief of Army Staff General Qamar Javed Bajwa, who is scheduled to retire in November. The constitution allows the prime minister to pick the military head from a list of generals submitted by the outgoing chief. However, the matter saw intense tensions when last month the army reacted strongly to some “defamatory” statements made by Imran Khan on the appointment of the new military chief.

Addressing a rally in Faisalabad in Punjab last month, Imran had accused the government of trying to appoint a “favourite” as the next army chief, stirring political controversy with Imran’s arch-rivals demanding action against him for “maligning” state institutions. However, during a media talk in Islamabad earlier this month, PTI leader Fawad Chaudhry rubbished the allegations that his party had objections to the appointment of any new army chief but clarified that it had only reservations about those at the helm of the process of picking a new military head.