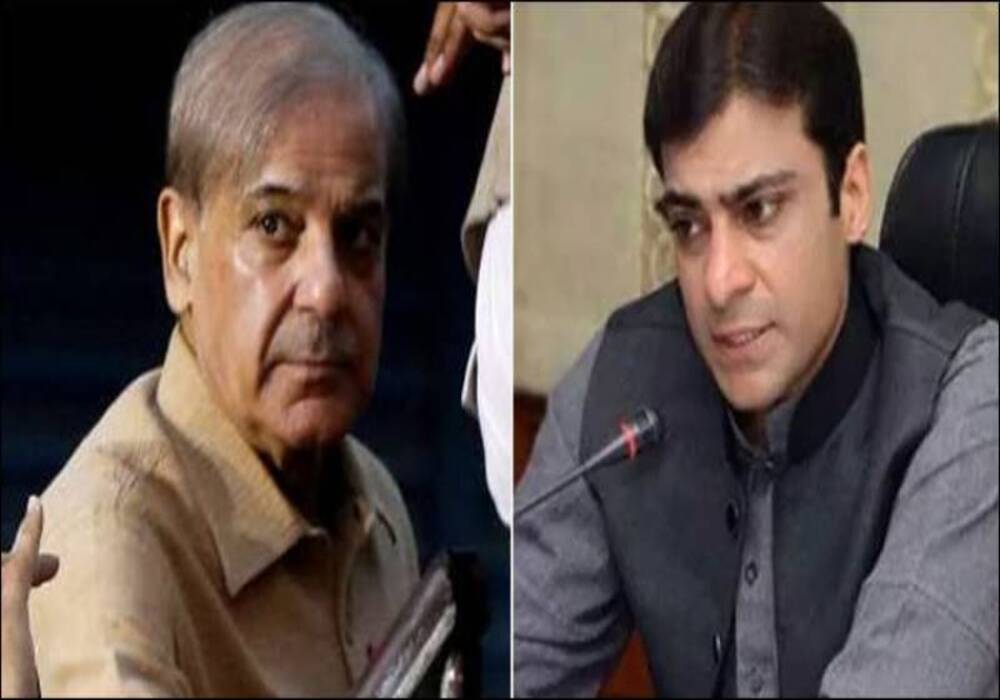 The Federal Investigation Agency (FIA) could not complete investigation into the money laundering case against Pakistan Muslim League-Nawaz President Shehbaz Sharif and his son Hamza Shehbaz as the role of the bankers was yet to be determined,

According to a Lahore Special Banking Court written order, released on Wednesday, Banking Court Judge Sardar Tahir Sabir extended the interim bail of Shehbaz Sharif and Hamza Shehbaz in the case till January 14, 2022.

The court order held that FIA admitted before the court that it could not complete investigation into the case as the role of the bankers had yet to be finalized.

“Learned defence counsel has pointed out that Para 38 at Page 39 of the Report submitted under Section 173 of Cr.P.C., the investigation is still under process against the bankers and their roles have not so far been finalized,” the judge held.

The judge also held, “Special Prosecutors of the agency and Syed Ali Mardan Shah, Assistant Director, FIA (head of the investigation team) have admitted that those [bankers] roles are yet to be finalized.”

Addressing the FIA’s question about the court’s jurisdiction to hear the matter, the court held, “The question of jurisdiction of this court cannot be adjudicated upon.”

The court order stated that FIA’s assistant director sought ten days more to submit the final report and assured the court that the investigation into the matter would be completed.

Judge Sardar Tahir Sabir directed the officer to complete the investigation by all means and to submit the final report on the next date of hearing fixed as January 14. 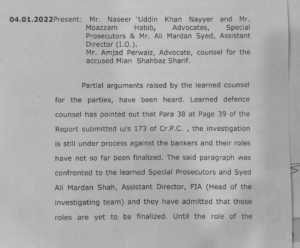 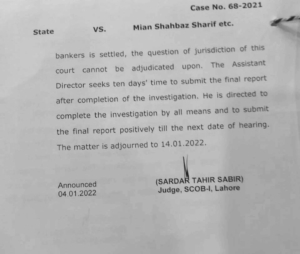 FIA is currently engaged in investigating a Rs25 billion money laundering case against Shehbaz Sharif, Hamza Shehbaz and others.

On September 23, FIA told a judicial magistrate that it wanted to withdraw list witnesses against Shehbaz Sharif and his son Hamza Shehbaz. The Agency claimed that the witnesses were being harassed. Judicial magistrate  Mohammad Kamran Zafar stated, “The investigators may move the application as and when they feel it appropriate.”

The judge also allowed the agency to withdraw its witnesses from testifying before the court.

It may be mentioned here that FIA in its investigation claimed that total deposits amounting to over Rs25 billion (duration 2008-2018), identified so far, were received in the bank accounts (hereinafter A/C) of various low-wage employees of Ramzan Sugar Mills Ltd (RSML), AI-Arabia Sugar Mills Ltd (ASML) and accounts of fake companies set up and controlled by the Sharif Group.

An amount of Rs3.7 billion was received in 2016/l7 in the accounts of a peon namely Malik Maqsood working at the office of MD Suleman Shehbaz at the Sharif Group’s Corporate Office, Model Town Lahore.

The FIA also claimed that the low-wage employees of RSML/ASML had admitted during inquiry that these accounts were opened and operated for the personal/secret transactions of Suleman Shehbaz on the instructions of Muhammad Usman, CFO of Sharif Group.

Mushtaq Cheeniwala provided ‘secret-ledgers’ as proof to show that the money from the undisclosed sale of sugar deposited into these accounts was only Rs3.95 billion, implying that the source of remaining funds was ‘extraneous’ to sugar business and could best be explained by Shehbaz Sharif and his sons and RSML/ASML officers who managed these accounts.