FIA must arrest Imran ‘like PML-N leaders were’: Marriyum 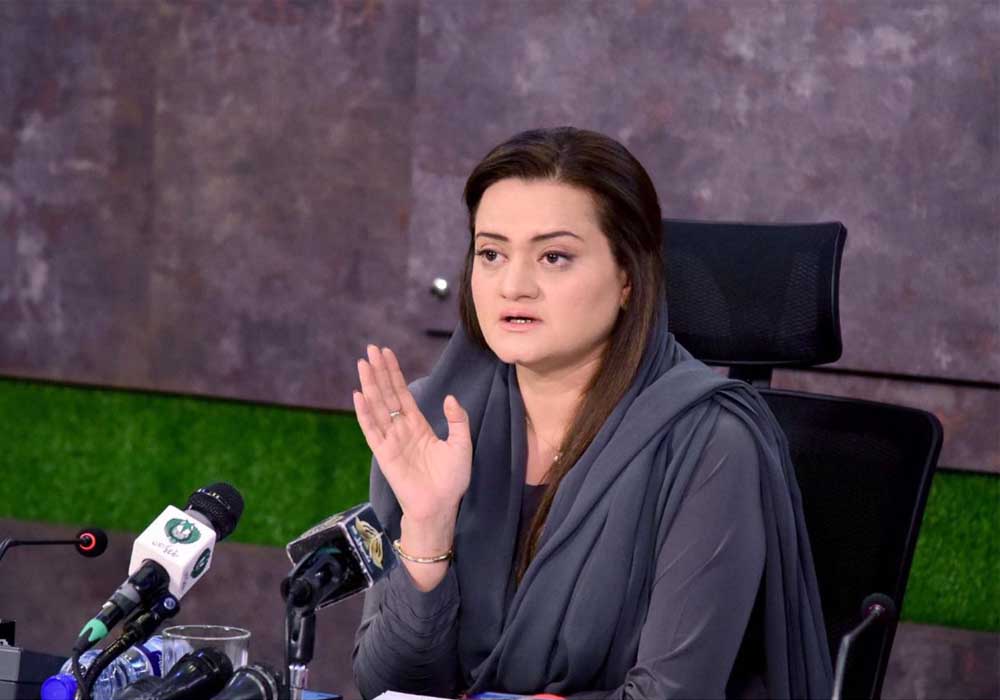 Minister for Information and Broadcasting Marriyum Aurangzeb on Thursday said the Federal Investigation Agency (FIA) should arrest Imran Khan like the Pakistan Muslim League-Nawaz leaders who were apprehended based on mere accusations.

“If the FIA can arrest Shehbaz Sharif, Maryam Nawaz, Suleman Shehbaz, Hamza Shehbaz, Ahsan Iqbal, Shahid Khaqan Abbasi, Miftah Ismail and others based on allegations, then why Imran Khan, who used the prohibited funding against the national interest, should be let scot-free,” she said while addressing a news conference.

Marriyum said a person (Imran Khan), who refused to appear before the FIA in connection with the prohibited funding, should be in jail.

She also asked all those, who had opened fake accounts for receiving the prohibited funding, to appear before the FIA, otherwise, they should be ready for strict action.

The prohibited funding case, she said, would be taken to its logical end and all details would be made public so that the people should know how Imran Khan had misled them through “lies and deception”.

“The probe in the PTI’s prohibited funding is underway and the FIA has unearthed a big account, whose details will be shared with the public tomorrow,” she remarked.

The minister said the Election Commission of Pakistan had declared the PTI a foreign-aided party as it used some 351 accounts for receiving the prohibited funding. She alleged that Imran Khan also used the funds, collected from abroad in the name of Shaukat Khanam Hospital and flood victims, for creating chaos and anarchy in the country. Marriyum regretted that the “trespasser of the constitution” refused to appear before the FIA, contravening his own so-called stance that the powerful should not be above the law.

On the contrary, she added, Nawaz Sharif along with his daughter had regularly appeared before the court when he was the prime minister. She said the country, media and nation had gotten freedom from a “foreign agent and his foreign funding”. As regards the address of Imran Khan to a seminar on press freedom, the minister said inviting a person, who had gagged the media during his four-year rule, was a “ridiculous step”.

She was surprised to see that some responsible journalists were listening to Imran Khan’s address attentively, she added. Marriyum recalled that when Imran Khan was the prime minister journalists were killed and their ribs were broken, and state institutions were influenced to put Mir Shakeel-ur-Rehman in jail.

The minister said a person (Imran), who was declared the “Predator for Press Freedom”, had no right to lecture others on media freedom and freedom of expression. Imran Khan enacted the black law to curtail media freedom.

It was Imran Khan’s tenure when the PTI’s trolls, its rented spokespersons and even the then information minister campaigned against the media, she said, adding Mattiullah Jan was abducted, Absar Alam shot at, Nusrat Javed attacked, malicious drives launched against Asma Shirazi and Ghareeda Farooqi on social media, and news programmes of Amber Shamsi, Syed Talat Hussain, Dr Danish, Najam Sethi and Hamid Mir were off aired on his (Imran) directives. The minister said Imran Khan had stated that he did not have any fear of the media, but his actions during the four-year rule completely negated his claims.

She said Imran Khan did all in his power to oppress his political opponents, including Nawaz Sharif, Maryam Nawaz and Shehbaz Sharif who were kept in death cells and denied medical treatment and hygienic food. Imran Khan created a hurdle in the grant of parole to Nawaz Sharif when his wife died, while his spokespersons ridiculed the ailment of his wife, she said, recalling how Shahbaz Gill parroted lies when Kalsoom Nawaz was in the hospital.

She said Imran Khan locked up Rana Sanaullah in a small cell where cockroaches and ants were released.

Separately, in a statement, Marriyum, while terming Imran Khan’s tenure as prime minister as a dark chapter for media in Pakistan, said that media organizations and journalists should recall the anti-media track record of the PTI regime before attending his media seminar.