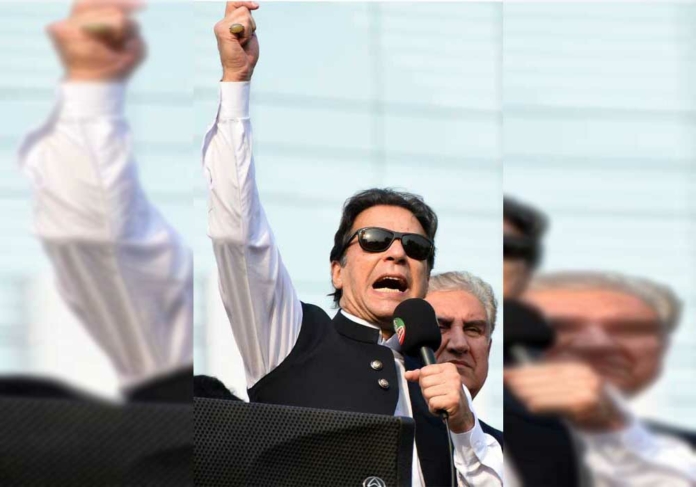 Defiant Pakistan Tehreek-e-Insaf (PTI) Chairman Imran Khan termed the party’s criticism of the military establishment “constructive one” as he began PTI’s long march with a fiery speech from his container on Friday.

Although the PTI had planned to kick off the march from Liberty at 11am, the party leadership was nowhere to be seen at that time. Imran himself reached the venue after Friday prayers where he delivered a speech while referring to PTI Senator Azam Swait’s press conference wherein he named two military officials behind his “custodial torture”.

“The ‘Dirty Harry’ is ‘torturing’ the people since he came to Islamabad,” Imran Khan said. “Azam Swati has named Faheem and Faisal responsible for his custodial torture,” said Imran Khan while demanding stern action against both of them.

“Azam Swati was first picked up by ‘Dirty Harry’ and then he was tortured in front of his grandchildren. Same was done with Dr Shehbaz Gill by Faheem and Faisal,” said Imran Khan.

“The ISI sector commander in Karachi was removed after Bilawal gave a statement against him. Now these two officials should also be removed” Khan said while addressing Chief of Army Staff General Qamar Javed Bajwa. “Such people are defaming you Gen Bajwa,” Imran said.

He also spoke about the joint press conference held by the ISI DG and the ISPR DG and said that he had kept a mum because of the institution and the country.

The PTI chairman claimed that he had never made any unconstitutional demand during the backdoor talks with the powers that be. “I only want free and fair election in the country. People should decide their rulers and not the America or any other force,” Imran Khan said.

Earlier in the day, Imran Khan started his long march from Liberty and addressed his supporters at different points.

Addressing the workers, Imran said that he has taken to the streets for real independence and will continue his struggle till his death. “We want freedom from thieves, who are slaves of America and other forces,” he said. “We want to get rid of both internal and external slavery,” he added.

“The handlers should listen carefully. It is a flood of people and no one can stand against it,” Imran said at Ichhra. He said that the long march will be unprecedented in the political history of Pakistan. “It is just the beginning. Seeking election is only aim of this independence movement. It will continue till we get complete justice,” Imran Khan said.

The former prime minister also spoke to different media outlets as the long march moved on.

“Pakistan was not made for a small group of occupiers to do as it deemed fit,” he said while speaking to a private TV channel. He reiterated the need for the supremacy of law in the country.

Speaking to another TV channel, he regretted that the law was different for the powerful and helpless in the country.

Recounting what the PTI has described as the ill-treatment of politicians and journalists, Imran said that slain journalist Arshad Sharif knew there were threats to his life even when he was abroad.

PTI chief Imran Khan asserted that his party is marching on Islamabad to demand elections.

To a question, Imran replied, “We don’t want interference, we want elections.  He went on to say that the intervention was sought by those were couldn’t contest elections and did not have the nation’s support – an apparent reference to the incumbent government.

“It is they who want to backdoor [talks] and beg America,” he added.

When asked whether the PTI had any plans of staging a sit-in, Imran said “the party has just begun”, implying that it was too early for a sit-in.

PTI leader Shah Mahmood Qureshi said the marchers “are not out to topple” the government, just that they believe the system should change and people should get their rights.

Speaking to a private television channel, he said the party is out to mobilise the people. “The aim is not to attack the capital but to convince the government that the people are disappointed and they should go for elections,” he said.