"Film boasts slick camera work, snappier dialogue and an inner turmoil of our hero that churns along nicely" 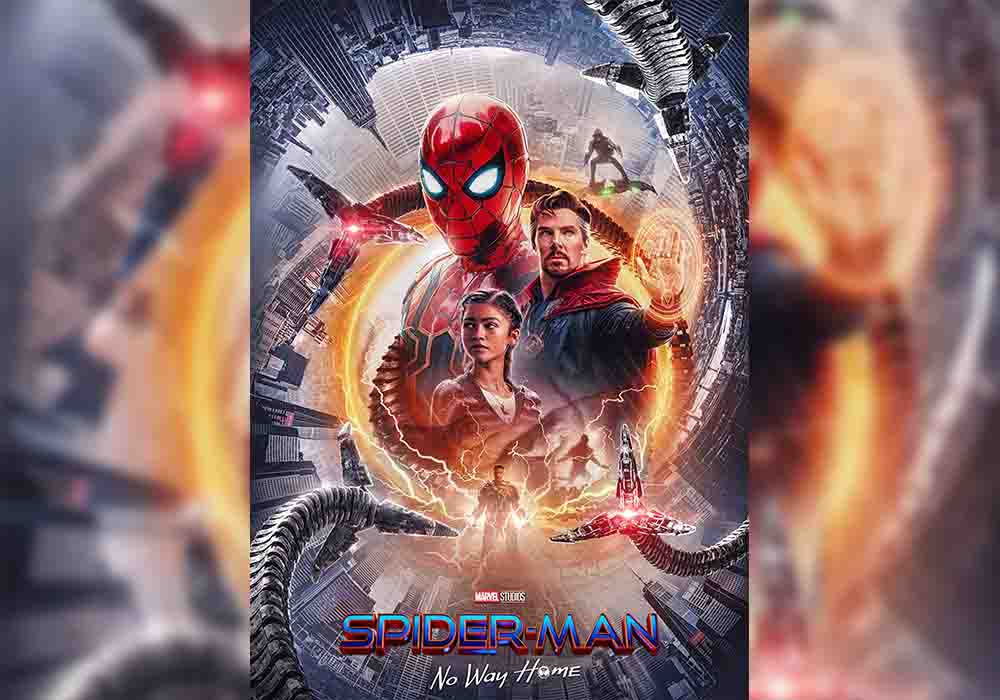 Directed by Jon Watts and based on the Marvel Comic books, ‘Spiderman-No Way Home’ falls in the genre of adventure and sci-fi.

With a runtime of 2 hours and 28 minutes, it has received a rating of 9.1/10 on IMDB.
The film begins with the breaking news of Spider Man (Tom Holland) having revealed his identity as Peter Parker.

Amidst a commotion of slogans and insults directed at Spiderman who is not a ‘hero’ but a murderer taking the lives of innocent citizens and causing chaos and destruction all across the US, Peter Parker is at a loss to figure out a way through all the hatred and enmity he has to face at the hands of the media and the public.

Spiderman is the nephew of May Parker and lives in her home. May acts as a pillar of support for Spiderman, helping him through his career as a savior of mankind.

He is aided in his mission by MJ (Zendaya) and Ned (Jacob Batalon) as his best buddies, as all three receive a rejection from the universities based on the current events which target Spiderman as a criminal.

As the future of all three is put into jeopardy because of the current events turning Spiderman into a criminal, Peter Parker seeks the help of Dr. Strange (Benedict Cumberbatch) to secure the future of his friends.

The film shifts focus onto ‘Strange the Supreme Sorcerer’. As he casts a spell trying to turn back time through the time stone so that no one will remember Peter Parker to be Spiderman, the spell goes wrong and unleashes monsters from another universe who want to kill and destroy this world.

Strange tells Spiderman that him living with two identities will further complicate things. As Strange holds Spiderman responsible for brainwashing the entire world, the film takes on a twist that wins the hearts of the spectators.

Octavian, Norman Osborne, Max Dillo and Flint Marko are all from another world, and Dr. Strange orders Parker to capture all of them. The villains realize that some of them were pulled from their universe just before their death. Dr. Strange wants to send them back where they will meet their fate but Parker wants to cure them before returning them to their home since that will change their fate and they will not die.

Despite the grim and somber storyline the film unfolds in a light and entertaining manner. With a witty, often sarcastic humour, the film keeps the audience engaged through the length of the film without boring them.

As May asks Octavian if he would like ‘fresh water or salt because you are an Octopus”, it sends the audience into a fit of laughter.

The irony in the dialogue wherein Spiderman says, “I’m the most famous person in the world and I am still broke,” is hard to ignore. It is a reality, a truth that is difficult to accept. It points to the reality of who a ‘hero’ really is? What makes a hero is not wealth but courage and bravery to stand up for the truth and protection of the innocent.

As the reporter says referring to Spiderman, “Only a coward hides his true identity and intention,” the definition of a hero is again questioned. Is Spiderman really a true hero?
The film reels on and whether or not Spiderman is successful in his mission is a question I leave for the reader to find out!

As the film reaches the end, the question of whether there will be another Spiderman film or not lurks in the mind of the viewers and the director definitely doesn’t disappoint them, throwing the hint of another film on its way.

Analyzing the film, one can safely agree that the camera work is slicker, the dialogue is snappier and the inner turmoil of our hero churns nicely along.

My favourite dialogues are as follows:

The lines clearly manifest the burden of responsibility that rests on the shoulders of a person who has the ability and power to change things for the good!

The line “If you expect disappointment you will not be disappointed,” are also pregnant with meaning. Keeping low expectations will enable a greater degree of satisfaction and fulfillment. When you don’t have a high expectation, you are more likely to courageously handle failure.

The film upholds the two statements as true. Peter parker or Spiderman is entrusted with a noble task and the fact that he is prepared for being unsuccessful despite his maximum efforts is what makes him win this battle!

The climax in the film is when Ned summons Peter Parker and three Peter Parkers appear! The audience is not expecting such an interesting turn in the plot. The excitement the audience is feeling at the particular moment is undefinable.

How will the three Peter Parkers defeat the enemy? Will they die? Will they survive? What will happen? What is that they will have to sacrifice for the greater good? Will the world forget Peter Parker? Or will he be hunted till he lives?

The questions haunt the audience who had their eyes glued to the screen trying to figure out what will happen next?

To sum up, Director Jon Watts “deals with real consequences, a darker tone in general and a recognizable New York setting” (with a few Marvel Cinematic Universe touches). In other words, if you came for the biggest movie of the year, you’ll definitely leave satisfied.