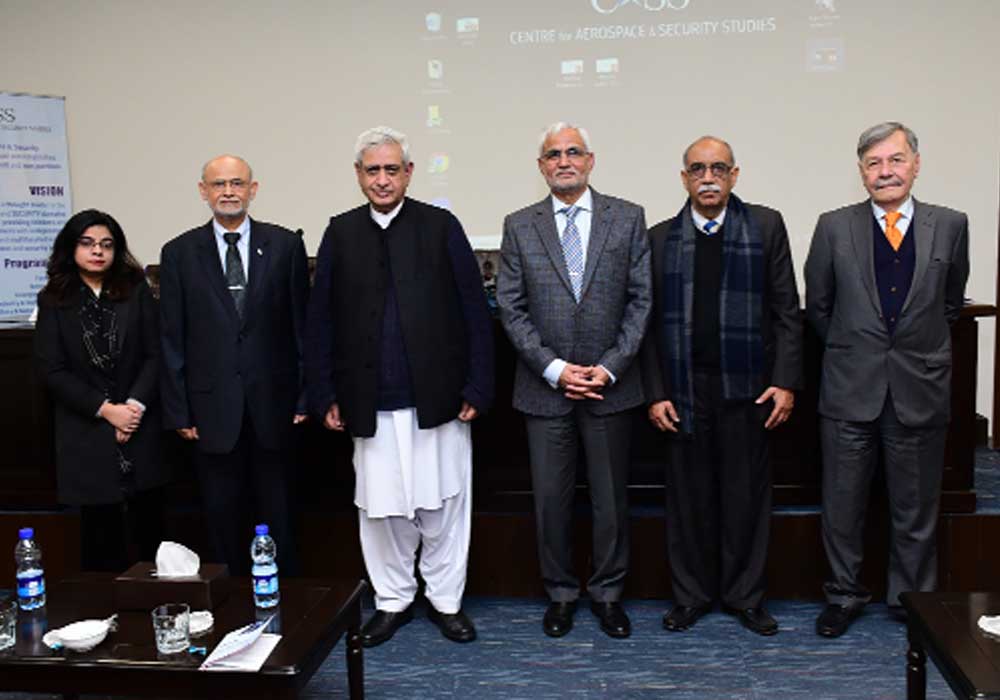 National security cannot be guaranteed unless there is food security in Pakistan. Urgent attention needs to be given towards reforming and modernising the agriculture sector as well as controlling population growth.

Dr Zia Ul Haque Shamsi, while delivering the Opening Remarks, highlighted that Pakistan being the fifth largest state in the world, and a predominantly agri-based society, unfortunately faces serious concerns of food insecurity for various reasons. This was especially concerning because while efforts were in hand to improve farming processes through modern methods, better seeds development, and resource management, Pakistan still had a long way to go in ensuring food security for its growing population at an affordable cost, he said.

In his Keynote Address on ‘Role of Agriculture Sector and Food Security in Pakistan’, Syed Fakhar Imam pointed out that national security, international security, and food security were all interlinked and could not be divorced from each other. He lamented that of the five major crops, wheat was grown on 36% of the land which was where the problem lay. Sadly, Pakistan had failed to evolve high-yield crop varieties. Mr Imam argued that despite having five major agri-universities and affiliated colleges, they were not at par with international standards and had outdated curriculum. In his view, population explosion was also a major reason why Pakistan had become an importer of wheat. According to the speaker, mechanisation, modernisation, agricultural extension, human resource development and research are key for strengthening the agro-economy of Pakistan.

Dr Abid Qaiyum Suleri underlined that triple C Crises ‘COVID, Conflict & Climate Change’ were forcing states across the globe to question and rethink their healthcare systems, economic policies, and ways of producing and consuming food, but Pakistan, had tetra-C crises given its ‘Complacency’. He pointed out that even before Pakistan’s super floods and Russia-Ukraine war, the country was ranked 9th in the list of countries facing worst food insecurity. In his assessment, the Punjab Food Department released subsidised wheat to flour mills in April 2022, as opposed to its earlier policy of releasing the stocks in September, had resulted in the current wheat flour crisis as it allowed the private sector to hoard its reserves. Dr Suleri warned that future generations of Pakistan faced heightened risk of malnourishment, wasting, stunting as well as low IQ. He urged shifting to precision agriculture technologies; adopting climate-smart agri-practices; integrating social safety nets for farmers, including weather index based insurance; improving agri-institutional arrangements; offering smart subsidies; and solarization of tube wells, among others.

While analysing the availability of water for agricultural needs, Mr Ashfaq Mahmood provided an overview of the water resources of Pakistan under the Indus Waters Treaty and transboundary waters. He informed that glaciers, snow melt, and rains were major sources of water for Pakistan. In his view, the effects of global warming and climate change had made it difficult to ensure sustainable water management in the country. He proposed increasing water storage capacity by building a combination of large, medium, and small dams; harvesting rainwater, particularly in barani areas; rationalising water withdrawals by provinces; conserving and recycling water; proactively addressing transboundary water issues; population control; desalinizing sea water; and promoting information dissemination and rationalisation of virtual water.

Ambassador Shafqat Kakakhel expressed disappointment that the problem in Pakistan was not the preparation of plans and projects rather lacked implementation as institutional arrangements for translating them into tangible actions was continuously eroding. He warned that the cumulative effects of climate change would not just be on food security but would also increase poverty and slow down poverty eradication efforts. He advised adopting the perennial system of irrigation in the country.