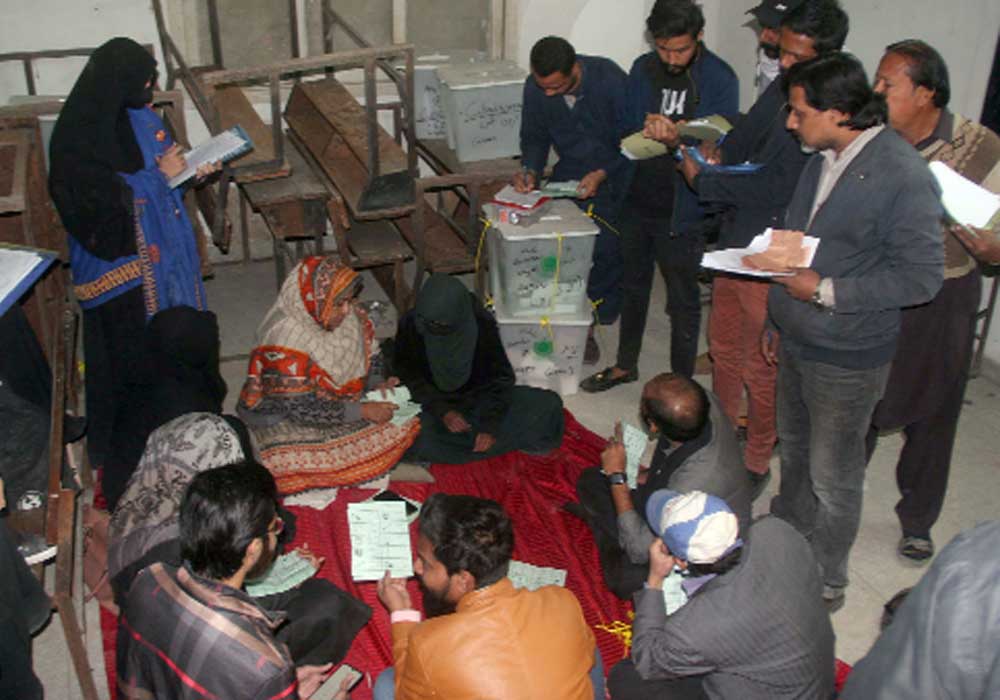 But, hours after the end of polling, results were still awaited from most districts in Karachi division, with reports of polling agents not receiving Form 11 and Form 12 from presiding officers, and reporters complaining of being barred from covering the vote counting process.

Meanwhile, Emir of Jamaat-e-Islami’s Karachi chapter Hafiz Naeemur Rahman threatened to stage sit-in protests if the results of the local body elections were not announced on time.

He claimed that some deputy commissioners working in favor of the PPP-led Sindh government were interfering in the process. He said that his party had not been provided the forms even after 10pm.

Earlier, despite the demands of the Muttahida Qaumi Movement-Pakistan (MQM-P) and the consecutive requests of the Pakistan People’s Party (PPP)-led Sindh government to delay the polls, the local government elections were held as per the schedule. However, the MQM-P – one of the most popular political parties in the two cities – boycotted the elections.

On Saturday night, there had also been a delay in the distribution of polling materials from the dispatch centres established in all the districts of the city. However, ballot boxes, ballot paper, ink and other supplies were distributed by the evening.

Meanwhile, the ruling PPP filed a complaint with the ECP regarding candidates interfering in the electoral process.

The complaint stated that in Kemari District, Maripur Town, Machar Colony, UC-6, about four polling stations were overcrowded, the polling process was slow and the candidates were disturbing the polling staff in performing duties. The PPP requested the commission to conduct a “timely investigation” into the matter in order to “ensure free and fair elections”.

According to reports, PPP leader Salman Murad attempted to enter polling station No 202 and No 203 in the metropolis.

The polling staff asked him to leave the station, however, despite their resistance, the PPP leader forcefully entered the station. Shortly after, PTI workers gathered outside the polling station and the police arrived in large numbers.

Moreover, the PPP also filed a complaint with the electoral watchdog against PTI leader Firdous Shamim Naqvi for allegedly attempting to break the seal of ballot boxes in Tehsil Municipal Committee Jinnah. He could be seen in videos complaining about the mismanagement and the alleged improper sealing of ballot boxes.

The PPP emerged victorious in Karachi’s Malir district. According to unofficial results, the PPP won 29 seats of union committee chairman and vice chairman, sweeping the polls in Gadap, Malir and Ibrahim Hyderi. However, the PPP was defeated in Gulshan-e-Hadeed’s UC-4, which was won by the JI’s candidates for chairman and vice chairman. Foreign Minister Bilawal Bhutto-Zardari – who is also the PPP chairman – said on Twitter that his party had “swept” the polls.

On the other hand, Muttahida Qaumi Movement-Pakistan (MQM-P) convener Dr Khalid Maqbool Siddiqui on Sunday appealed to the chief justice of Pakistan (CJP) to take notice of the “violation” of the constitution by the ECP. MQM’s lawyer Tariq Mansoor said Siddiqui had written a letter to the CJP, which stated that the ECP had violated the 22nd Amendment 2016 and Articles 218(2) and 219 of the Constitution. He furthered that the purpose of the letter was that the commission should release the new delimitation and election schedule before January 15. However, even after six days, the ECP has not given any response.