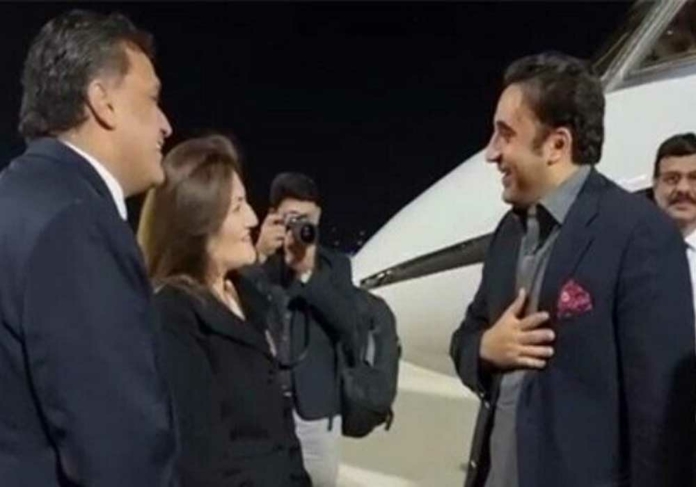 In a bid to help Pakistan tackle the ongoing climate-induced catastrophe, German Foreign
Minister Annalena Baerbock on Friday announced 10 million euros in flood-relief support. The announcement came as Foreign Minister Bilawal Bhutto-Zardari – who is on a two-day visit to Germany – and Baerbock addressed a press conference in Berlin.

He said that the World Health Organisation (WHO) has already warned of a second catastrophe following the devastating floods in the shape of diseases. “I want to get justice for my people. Pakistan produces less than one per cent of global emissions but we are among the top climate-affected countries in the world. Pakistan needs a green revolution and green politics,” Bilawal said during a press conference flanked by German counterpart Annalena Baerbock in Berlin on Friday. Talking about his meeting with Baerbock, Bilawal said that both leaders discussed ways to enhance the relations and people-to-people exchanges.

“We have a significant Pakistani community in Germany. It is a strong bridge between the two countries. Germany is one of our largest trading partners. Trade is increasing. GSP+ status has been mutually beneficial.” Bilawal said that Pakistan remained concerned about the ongoing war in Ukraine.

“We desire to dialogue and diplomacy to resolve the matter.”

He said that despite Pakistan largely being an aid-receiving country, it provided humanitarian assistance to both Ukraine and Afghanistan. The German foreign minister, on the occasion, said that Pakistan could rely on the support of the German people and government. “Dear Bilawal, no matter how tough the issue we have discussed. I’m grateful to you that you visited in these difficult times. Pakistan can continue to rely on our
solidarity. I look forward to continuing the talks and engagements with you. Thank you for coming to Berlin today,” she added.

Amid talks about the use of nuclear weapons during the ongoing Russia-Ukraine war, FM Bilawal said that it is preposterous that the matter is even being discussed, hoping that sanity would prevail in finding a peaceful resolution to the conflict. Russian President Vladimir Putin, in a statement last month, signalled that Moscow would use “all means to defend Russia and our people” if its territorial integrity is threatened.

Later, he ordered Russia’s first military mobilisation since World War Two, warning the West that if it continued what he called its “nuclear blackmail”. Moscow would respond with the might of all its vast arsenal. “I am absolutely horrified that I am standing in 2022 and we’re discussing the use of nuclear weapons,” Bilawal said that the use of nuclear weapons is not an option for anyone, urging the leadership of Ukraine and Russia to sit together and come to a resolution.

“What history would say of us [that] when we were faced with a once in 100 years pandemic… an existential threat to the human race and when were simultaneously facing catastrophe after catastrophe and our earth was warming up that we decided to engage in war,” he added.

He said that Pakistan is worried about the direction in which the events are taking place in the conflict. “We continue to respect the UN charter whether it be Kashmir or anywhere else. It is preposterous that we’re even discussing the use of nuclear weapons. I plead for sanity and hope and pray that we engage in dialogue and diplomacy.”

Responding to a question about Indian Illegally Occupied Jammu and Kashmir (IIOJK) and India’s unilateral actions of August 2019, the foreign minister said that Pakistan continues to raise the issue with foreign dignitaries during engagements.

Bilawal said that there has to be consistency on such matters and it should reflect in other areas such as the UN. “People of Kashmir continue to raise their voices. We look forward to the day the UN plays its role in finding a resolution to this longstanding dispute.”

He said that despite India’s unilateral actions, the ceasefire agreement with India is a positive development. “We hope to see the resolution of the dispute soon,” he concluded.

On the subject, the German foreign minister said that she truly believed every country in the world has a role in solving conflicts and ensuring that we live in a peaceful world. “It is our responsibility to look at other regions where the situation is tense. We support the engagement of the UN to find peaceful solutions.”

Earlier, during the media briefing, Bilawal apprised the media of his engagement with his
German counterpart, saying that both discussed bilateral and regional issues as well as climate calamities.

“Given Germany’s important position, our bilateral issues continue to grow. We
celebrated 70 years of international cooperation and decades of goodwill between both nations,” he added.

Talking about floods in Pakistan, Bilawal said that a 100-kilometre lake has formed because
of it in the middle of the country.