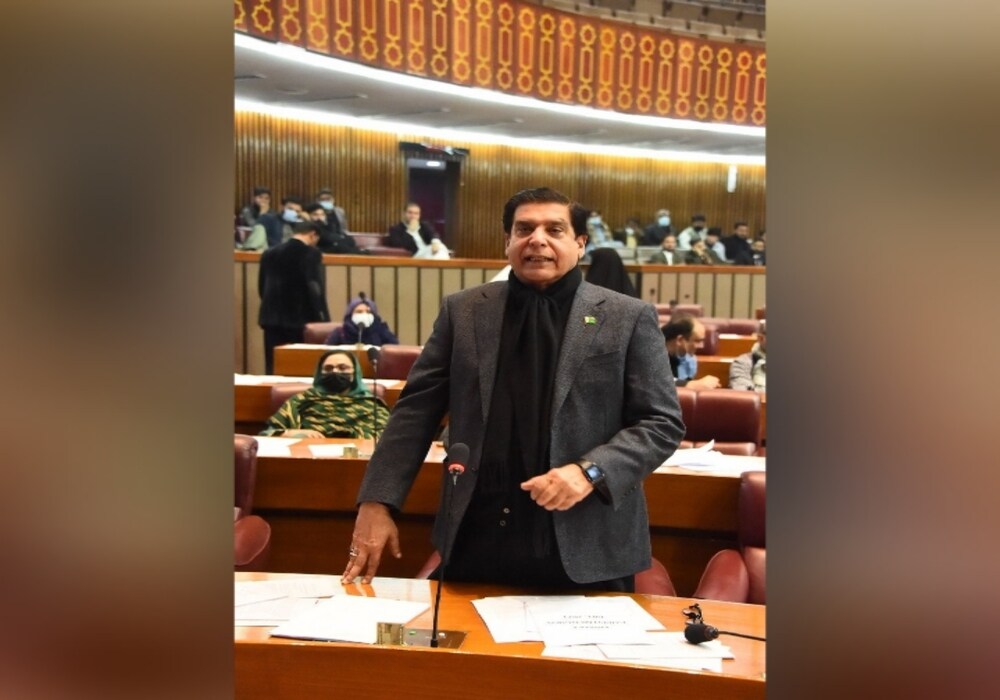 Pandemonium broke out in the National Assembly on Thursday when Finance Minister Shaukat Tarin unveiled the Finance (Supplementary) Bill 2021 and the State Bank of Pakistan (SBP) Amendment Bill 2021.

The treasury and opposition lawmakers were seen pushing each other during the session.

Earlier, PML-N leader Khawaja Asif said the sovereignty of Pakistan is being sold. “The nation is ashamed of what is happening in the house today,” he added.

He further said that the PTI-led government is trying to “enslave Pakistanis financially.”

“You’re giving the State Bank of Pakistan (SBP)’s control to the International Monetary Fund (IMF). Please don’t surrender Pakistan’s sovereignty,” he reiterated. Highlighting the promises made by the PTI leaders, he said that the government has been lying to the people for the last three years and recent local body elections in Khyber Pakhtunkhwa are proof of this.

The PML-N stalwart lamented over the government “increasing the prices of everyday items”.

Responding to allegation leveled by Asif, Federal Minister for Planning and Development Asad Umar said, “The difference between them [opposition] and us is that when they work to curb dengue, they have to advertise about it themselves. “But when we [PTI] work to curb Covid-19, the world praises us.” Reacting to Asif’s remarks about surrendering the sovereignty of Pakistan, he said: “It is the height of shamelessness that a Pakistani leader is speaking about surrendering the country’s sovereignty.”

He also lambasted the opposition for criticising the PTI’s defeat in KP local body elections. PPP’s Naveed Qamar protested the government’s move to extend ordinances, saying that “they have expired, so how can they be extended?”

He said: “This legislation is not for the PTI, or the PML-N, or the PPP. It is for the people. “It is regrettable that the opposition’s voice is not being heard. The PPP leader said that whenever inflation rises, the opposition is blamed. “A nation of 220 million is waiting for you (to transform their lives). But the government is clueless,” the PPP leader said.

Reflecting on the past three-and-a-half years, Ashraf said that petrol, electricity and gas, as well as prices of food items have risen manifold. “Can we not discuss this?” He called on the speaker to play an impartial role in the proceedings. The PPP leader said that the government’s policies “have broken the backs of the people”. “Whether it is a rich man or poor, they all curse the government,” he said.

“I plead with you to withdraw today’s proceedings,” Ashraf said. He told the speaker to listen to the opposition, as well as the government, and then decide whether this “cruelty” that has been unleashed on the people is justified.

Adviser to the Prime Minister on Parliamentary Affairs Babar Awan said that the government had introduced the ordinances in parliament prior to their expiry.

At one point in the session, PPP’s Shazia Marri objected to the strength of lawmakers in parliament. At this, the speaker instructed all MNAs to stand at their seats for a headcount.

Speaking to the media outside the Parliament House, PML-N Spokesperson Marriyum Aurangzeb said that the opposition will fight the “oppressors”, who have put pressure on the pockets of common people. “The mini-budget will cause more inflation to burden the masses,” she said, adding that the opposition will protest against the government “inside and outside parliament”. The PML-N leader said: “Prime Minister Imran Khan lies every day, he should be held accountable for the soaring inflation.”

“The government has enslaved the people under the IMF, we will fully contest the mini-budget,” she said.