Minister for planning says economy and peace should not be politicised, urges Imran Khan to suspend his anti-state campaign 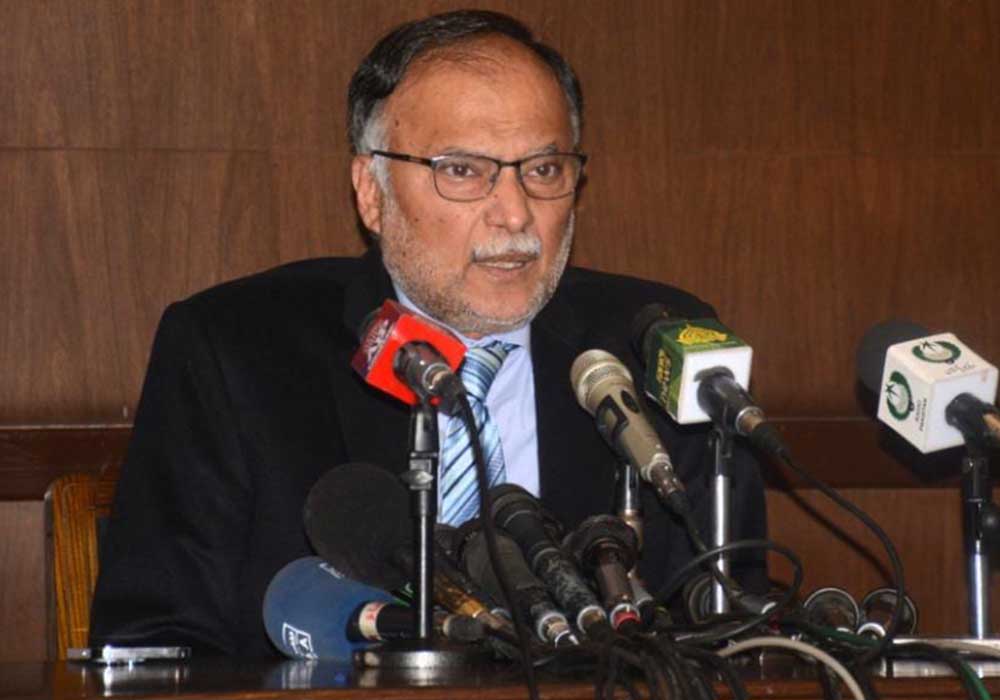 Addressing a press conference, he said the PTI during its tenure not only damaged the economy but it also ignored the law and order situation as well as war on terrorism.

He alleged the PTI was brought into power by giving NRO to Imran Khan through RTS system in 2018 elections and an illegible, inexperienced and incompetent government was formed. He added the PTI government, through devaluation of currency and other inappropriate steps, had thrown the country into the worst inflation and debts.

He said that almost 100 per cent resources were being used for payments of debts and the country needed more loans to be run.

“No doubt, it is very crucial time for the nation, but we will succeed in bringing the country out of the crisis”, he added.

Ahsan said that economy and peace should not be politicised, expressing hope that Imran Khan would stop enmity with the country by suspending his anti-state campaign.

He said that not a single word was said by any international financial institution about default of the country but, the PTI and Imran Khan were continuously making campaign to create a psychological atmosphere about it which was actually a hybrid war against the nation.

He alleged that Niazi and his team was spreading desperation among the citizens, which could be dangerous for the society.

He said that the PTI deliberately doing all of this as it had used all funds of PSDP for providing subsidy on petrol till April 2022 and the exchequer got empty.

He said that at least the PTI should shut their mouth if they could not take part in the building of the economy.

He alleged that the PTI and Imran were targeting Pakistan and the agreements it had made with IMF and other financial supporters of the country, adding that now the PTI had launched a drive against international help to meet the financial burden due to climate change and flood.

“Is it nationalism?” he questioned.

The minister said that the anti-Pakistan campaign would fail as the government would continue its struggle for the betterment of the country.

To a question about the local government elections, he said that the PTI should answer the question that who did unconstitutionally terminated local bodies and violated the orders of the Supreme Court.

He humbly appealed to the judiciary to eliminate the perception that Imran was always given a safe passage and the opponents of the PTI were even disqualified.

To a question, he said that the PML-N turned around the economy in 2013 and it would successfully do the same in few months.

To a question about the next general election, Ahsan said that according to a decision by the Council of the Common Interests (CCI), elections could not be held before the new national census, adding that the results of the census were expected in April 2023 and 4 more months were needed to prepare voters lists, so constitutionally, the next elections would not be possible before October 2023. “It is a constitutional obligation which was approved by the Imran Khan’s government,” he said. He said that the country could not be destroyed for the ego, hatred and inflexibility of a single person.

He said that another thing was the global recession which was being expected to be more severe by the financial experts in 2023, so it was the need of time to take every step with extreme care. To a question, he strongly rejected any space for technocrats’ government and termed it as unconstitutional.

He fixed complete responsibility of current financial crisis on Imran as he signed an agreement with the IMF and now the current government was bound to fulfill the conditions of the agreement.

He said the world was going to organize a conference in Geneva to express its unity with Pakistan on January 09.

To  another question, he said that dollar in the country was under pressure due to several reasons including big payments made by the government recently and purchase of dollars by Afghan traders. However, he said that the government was vigilant enough and taking steps to counter the challenge for dollar.

To a question about shortage of gas, he said again Imran Khan was responsible for this shortage as the PTI government did not make agreement for LNG with Qatar in time on cheap prices and added the second reason was the Ukraine war after which the prices of the gas in the international market went high.

To a question about barter trade with some countries, Ahsan said that the ministry of trade was making several agreements for barter trade.