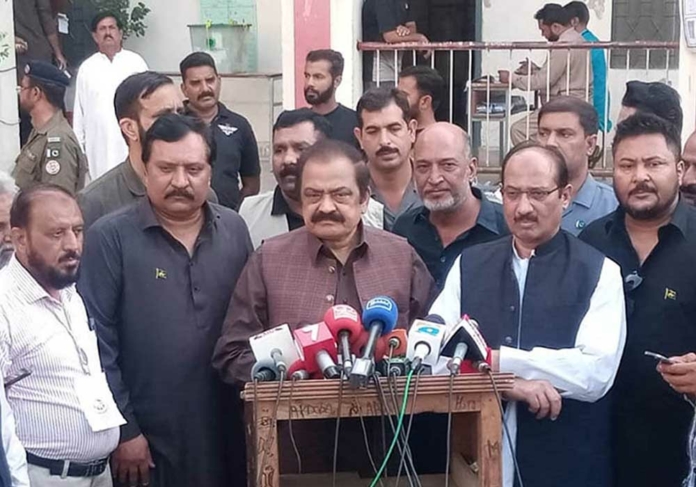 Interior Minister Rana Sanaullah on Sunday said that the government would be “10 times stricter” as compared to the policy adopted by the administration during the Pakistan Tehreek-e-Insaf’s long march to Islamabad in May as no one can be allowed to bring in a new government through mobs.

The statement came a day after former prime minister Imran Khan, during an interview, announced that his much-hyped long march to the capital would take place in October.

“If change is brought via a democratic process, we have no problems with it but we will not allow any long march under any circumstances,” Rana Sanaullah said after casting his vote during the by-polls.

The PML-N leader said that the Election Commission of Pakistan (ECP) has all the power and all agencies must implement its orders. He urged the voters to come out and vote, adding that the polling was underway in a transparent and peaceful manner. “All agencies including Rangers and police have done a good job whereas the counting of votes will be completed as per the procedure,” he added.

Responding to a question, the interior minister said that former prime minister Nawaz Sharif will decide for himself about returning to the country.

Meanwhile, the federal government has approved a three-month extension in the deployment of Rangers in the federal capital.

According to sources, the federal cabinet approved the extension in the deployment of Rangers in Islamabad after the federal capital’s chief commissioner requested for an extension.

The federal capital has braced for a law and order situation in wake of the expected long march of the Pakistan Tehreek-e-Insaf. Former prime minister Imran Khan has been on a campaign against the coalition government since his ouster from office. He has threatened to march on the federal capital against the coalition government.

According to sources, the capital will be completely sealed for a week following PTI chief Imran Khan’s announcement of a confirmed date for the march. Schools and colleges will be shut down for this duration and all exams will be postponed.