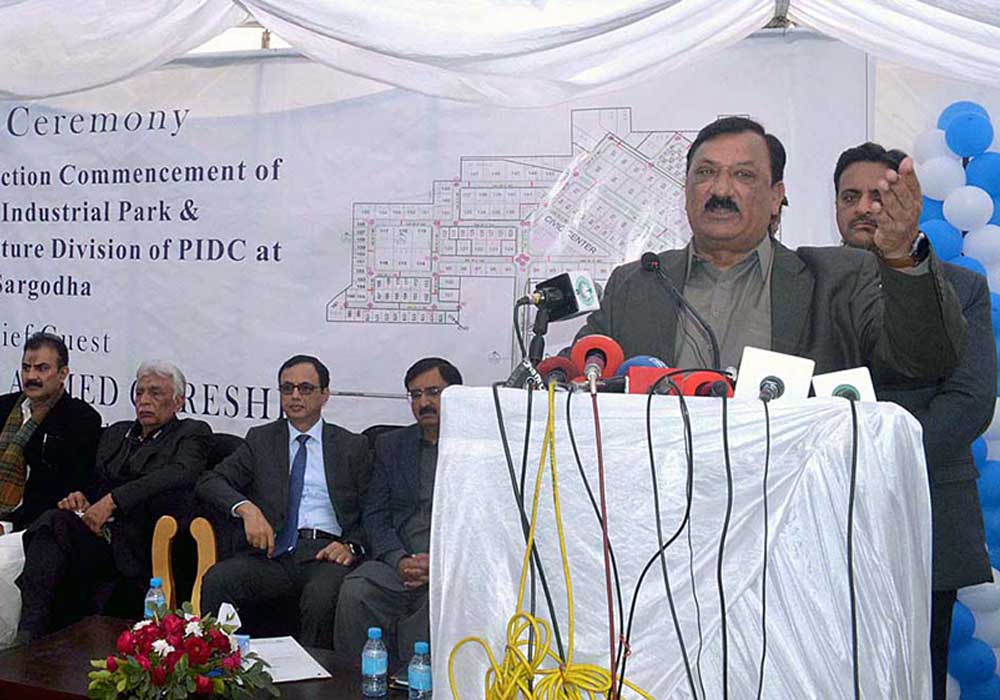 State Minister for Industries and Production Tasneem Ahmed Qureshi said on Monday that the federal government is utilizing all available resources for the progress and betterment of industry as it was a vital part of the country’s economy.

He stated this while addressing the inaugural ceremony of Pakistan Industrial Development Corporation (PIDC) project furniture division revival and construction work of Sargodha Industrial Park located here at Lahore road. Tasneem Ahmad Qureshi said that Sargodha Industrial Park would play an important role in the industrial development of the area which would create employment opportunities for people of the district. He said that PIDC was rendering valuable services for industrial development in the country.

He said that modern training centre would also be available in the park along with uninterrupted power supply and gas and all the facilities required for an industrial area. The State Minister said the project of Sargodha Industrial Park was started in 2013 during the Pakistan People’s Party government but due to some reasons, its construction work was stopped and now the PDM government had resumed its construction work. Tasneem Ahmed Qureshi said the industrial park consist of an area of 100 acres while all obstacles in the way of the said project had been removed and funds had been released for the construction work.

He appreciated the efforts of ex-prime minister Syed Yousuf Raza Gillani and former federal minister Ch Anwar Ali Cheema (late) for the construction of Sargodha Industrial Park. On the occasion, CEO PIDC Rizwan Ahmed Bhatti said the main objective of the PIDC was to provide assistance to those industrial sectors who had the capability to make progress. He said that in order to provide all necessary facilities to the industry sector, the PIDC had started the work to make latest industrial parks in the country so far work on six parks was underway.

He said that two projects under PIDC were being completed in Sargodha, one of which was Sargodha Industrial Park and the other was furniture restoration project. Head of operations PIDC Fahad Naseer, former MNA Chaudhry Aamir Sultan Cheema and a large number of businessmen and industrialists attended the event.

Advertisement
Share
Facebook
Twitter
WhatsApp
Email
Print
Previous articleLG elections on reserved seats to be held within a month: CM Murad
Next articleMarriyum concerned over law and order in KP