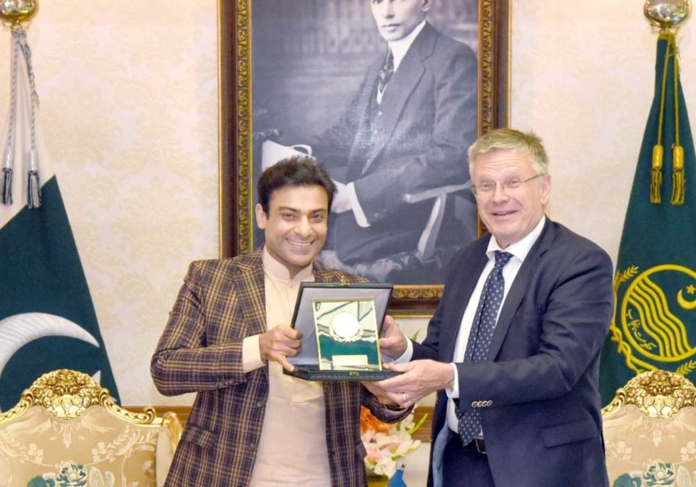 A delegation of the European Union’s monitoring mission, which arrived in Pakistan on June 22 to see the country’s eligibility for GSP Plus extension, met Punjab Chief Minister Hamza Shehbaz on Saturday in which matters pertaining to the implementation of different conventions relating to the GSP Plus came under discussion.

Hamza redressed the apprehensions of the EU monitoring mission – comprising officials from the European External Action Service (EEAS) and the European Commission’s Directorates-General for Trade and for Employment, Social Affairs and Inclusion – and assured the members of complete implementation of all conventions.

The CM informed the review mission head, Guus Houttuin, regarding his foremost priority to safeguard the rights of women, minorities and other downtrodden segments of society.

Hamza underscored that vigorous work had been done for the provision of equal rights to the weak segments during the previous term of the Pakistan Muslim League-Nawaz (PML-N) in Punjab, as child labour had been abolished from brick kilns and 85,000 children were enrolled in schools, where they were imparted free education and given monthly scholarships.

He emphasised that the protection of women, minorities and weak segments was part of his government’s priorities.

He outlined that necessary legislation had been made by his party in the past to empower women and minorities. The chief minister desired to further increase trade with the member countries of the European Union.

It may be mentioned here that the GSP+ status provides wide-ranging tariff preferences for imports to the EU from vulnerable developing countries to support poverty eradication, sustainable development and their participation in global economy, as well as reinforce good governance. Eligible countries like Pakistan can export goods to the EU market at zero duties for 66 per cent of tariff lines. This preferential status is conditional on GSP+ countries demonstrating tangible progress on the implementation of 27 international conventions on human and labour rights, environmental protection, climate change and good governance.