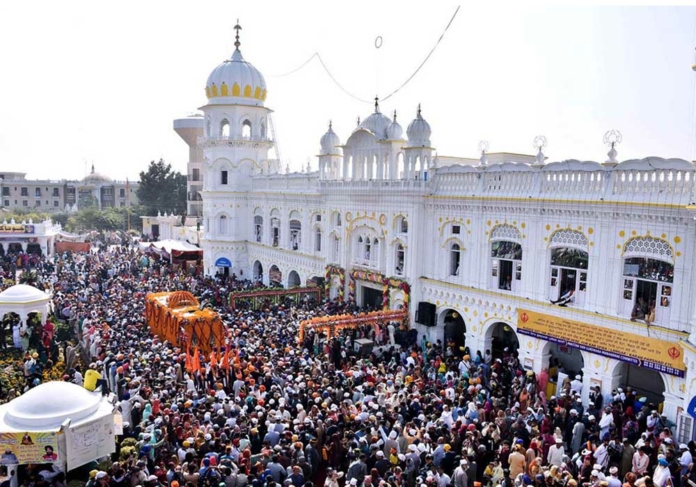 Federal Minister for Planning Development and Special Initiatives Ahsan Iqbal announced on Tuesday that the government would link Kartarpur with Nankana Sahib via motorway.

Addressing a ceremony in connection with the three-day celebrations marking the 553rd birth anniversary of Baba Guru Nanak that concluded at Gurudwara Janam Asthan in Nankana Sahib on Tuesday, Ahsan Iqbal felicitated the Sikhs and said that Baba Guru Nanak’s teachings reflected tolerance, dignity of people, equal rights, interfaith harmony and help to the needy. Baba Guru Nanak had taught and propagated a society free of discrimination, he added. The minister expressed his commitment to provide best facilities to Sikh pilgrims coming from across the world.

He reiterated his commitment to provide the best facilities to Sikh yatrees, and said that a road network would be laid to create a link from Nankana Sahib to facilitate the Sikh pilgrims. Ahsan Iqbal also appreciated the district administration and police officers for effective and comprehensive measures, particularly security to protect the Sikh pilgrims. Thousands of Sikh pilgrims from Pakistan, India, Canada and European countries participated in the ceremony at Gurdwara Janam Asthan. They performed religious rites in Nankana Sahib amid tight security. Evacuee Trust Property Board (ETPB) Chairman Habibur Rehman Gilani reviewed the arrangements and briefed that work was in progress for establishment of a library and a museum in Nankana Sahib to protect the Sikh heritage, adding that ETPB provided the best facilities to the Sikh community to participate in Baba Guru Nanak’s birthday celebrations.

He said that special attention had been paid to the maintenance and renovation of Gurdwaras of the Sikh community. Sikh delegation’s leader Pardhan Sardar Ameer Singh and Sardar Gopal Singh expressed gratitude to the Pakistan government and the district administration for the hospitality extended to the Sikh yatrees. Other Sikh leaders including Parmeet Singh, Diljeet Singh, Manjeet Singh, Partab Singh, Deputy Commissioner, DPO and other officials also attended the ceremony. The Sikh yatrees also visited more than 50 shopping stalls set up by the ETPB, whereas the Sikhs would leave for Gurdwara Punja Sahib, Hassanabdal.

Pakistan is hosting around 3,000 Sikh pilgrims, who arrived from India through Wagah Border to celebrate the birth anniversary of Baba Guru Nanak in Kartarpur on Tuesday. The Evacuee Trust Property Board (ETPB) has made all the arrangements, including security, accommodation, medical and transport to facilitate the pilgrims. Prime Minister Shehbaz Sharif Tuesday welcomed the Sikh pilgrims. The prime minister in a tweet said the life and message of Baba Guru Nanak promoted brotherhood and peace. “On this revered occasion, I welcome the Sikh pilgrims who have come to Pakistan from all over the world,” he said, expressing hope that they would have a wonderful stay in the country.