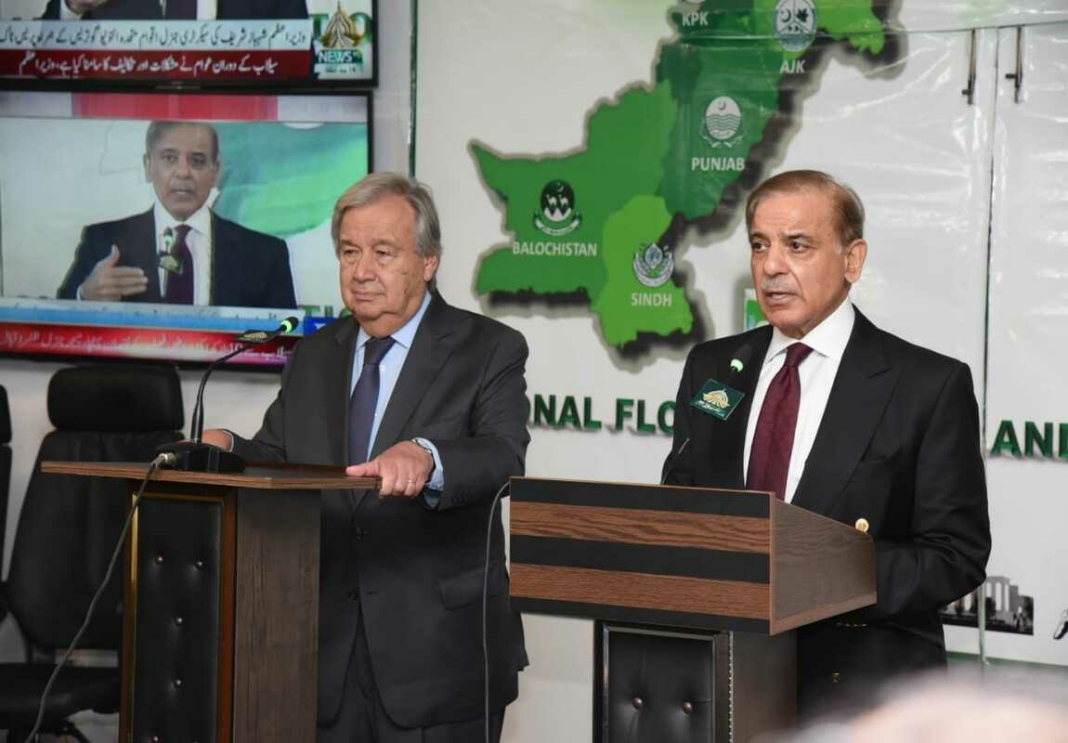 The UN Secretary-General flanked by PM Shehbaz Sharif at a joint presser held here at the National Flood Response and Coordination Centre (NFRCC), said the world needed to amplify its assistance to Pakistan in the wake of the natural disaster.

Guterres, who had earlier launched a global appeal to raise $160 million for the flood-affected people of Pakistan, said joint efforts were required to help the country overcome the consequences of climate change.

Pakistan, he said, despite its little contribution to climate change was bearing the negative effects of the phenomenon of natural disasters. He said it was absolutely essential for other countries, particularly those contributing to carbon emissions, to mobilize resources for Pakistan following the devastating monsoon.

“Today, it is Pakistan and tomorrow it could be any other country. Mobilizing resources for Pakistan is a matter of justice,” he said. The Secretary-General said Pakistan was witnessing an “unprecedented natural disaster” and lauded the government, army, and NGOs for working together in a “remarkable way”.

Guterres said he would continue to raise his voice for the Pakistani government and people who were grappling with difficult situations amid floods. “Pakistan is in my heart as I have worked with this country for 17 years while the nation extended enormous generosity to Afghan refugees for decades,” he said.

PM Sharif expressed gratitude to the UN Secretary-General for his “extremely kind and generous gesture” of visiting Pakistan to get first-hand information and express solidarity with the people. “We are very grateful for the solidarity demonstrated by you as 33 million people suffer dire conditions in the wake of heavy floods,” he told the Secretary-General, who arrived in Islamabad early this morning.

The prime minister said the civil government along with armed forces was carrying out massive rescue, relief and rehabilitation activities in the flood-affected areas.
He said Pakistan was facing the brunt of natural disasters and a similar situation could be faced by the rest of the world in future.

Sharif emphasized that after the rescue operations, Pakistan needed enormous funding for rehabilitation and reconstruction of damaged infrastructure.
The government, he stressed, was doing its best despite meagre resources and assured the Secretary-General that the dispensation of flood assistance would be made in a transparent manner.

Chairman NFRCC Dr. Ahsan Iqbal in his briefing mentioned that the 2010’s super floods affected 20 million people, however, the current flash floods impacted 33 million across the country. He said hill torrents proved a challenge amid a lack of efficient infrastructure to deal with the disaster and resulted in heavy loss of lives, infrastructure, livestock and crops.

He said Pakistan was expecting around a three percent reduction in Gross Domestic Product (GDP) in the backdrop of a combination of challenges including floods, the IMF programme and the economic situation in the aftermath of the Russian-Ukraine war.

Coordinator NFRCC Maj. Gen. Zafar Iqbal in his briefing said one-third of Pakistan was inundated in water covering a land area equal to the size of the United Kingdom, Portugal, New Zealand and Ecuador.

He said floods led to the loss of over $30 billion including the damage to 750,000 livestock.
In Sindh, he said, the national railway track remained underwater and the train service from Islamabad to Karachi could not be operated at the moment. It was highlighted that Manchar Lake burst at three places, affecting the railway line. In Balochistan, he said, four districts were still under water.

The NFRCC official said the coordinated efforts among civil government, military and NGOs including the UN aid bodies were in full swing, adding that the assessment survey on relief operations in the provinces would start by Monday.