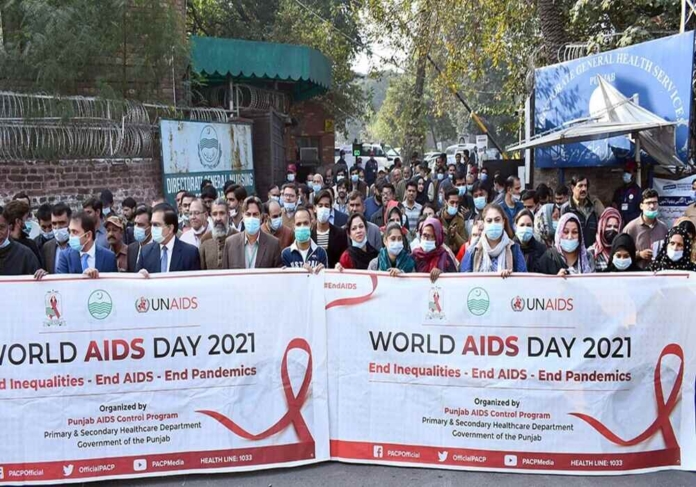 As many as 47 new adult HIV positive cases have emerged in the Larkana district in nine months between March and November 2021.

This was reported in the detailed statistical data revealed on Tuesday. The report was unveiled on World AIDS Day, which would be observed globally on Wednesday.

These statistics were maintained at HIV/AIDS (Adult) Treatment Centre, operational since 2007 at the Chandka Medical College Hospital, Larkana.

According to the data, there were 3,343 registered HIV positive adult cases from 2007 up to March 2021, out of which 733 were transferred all over the country to their nearby centres.

Only 2,610 adult patients were still registered with the Larkana Centre, out of which 2,308 were on HAART, and 302 have either absconded from the treatment or had died.

Larkana district continues to top the list of HIV positive cases as there were 1,393 registered cases in Larkana, which reached 1,440, meaning 47 new cases have been added to the list.

Dr Imran Akbar Arbani said that the prevailing situation was very alarming. Experts need to do something to stop the spread of this deadly virus, which was constantly hitting hard. He said massive awareness was a must, but practically, concrete actions should be taken.

He said auto-lock syringes should be used everywhere in public and private hospitals and clinics, and the use of other disposable needles should be made a criminal act. The Sindh Health Care Commission may be entrusted the task to enforce the law and check. He said quack clinics should also be sealed forthwith across Sindh, adding that rehabilitation of the affected people should also be arranged along with other essential things.