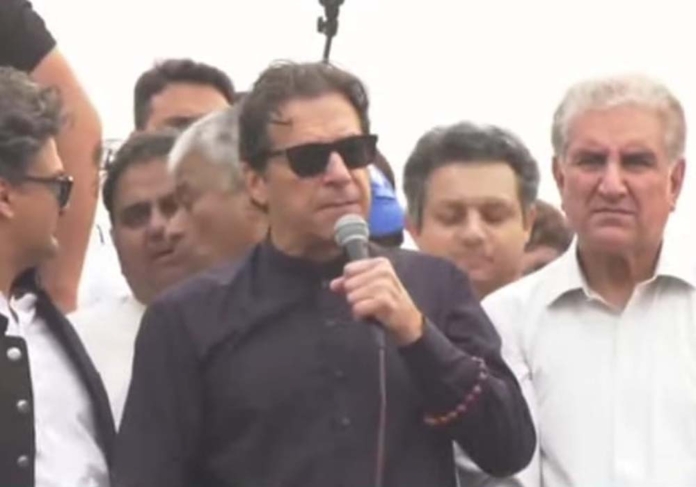 Pakistan Tehreek-e-Insaf (PTI) Chairman Imran Khan has said that he considers bowing before any superpower country as a ‘Shirk’.

He said that the absconder sitting in London and Zardari are collectively part of the conspiracy against Pakistan. He said that I shall live and die in Pakistan because I am not Nawaz Sharif who runs away abroad. He also challenged Nawaz Sharif to defeat him in his constituency.

Addressing the participants of his long march in Gujranwala, he said that there is no respect for a nation that is not independent. Imran said that a common Pakistani is being humiliated in police stations and courts and PTI is the only party that can unite the nation and federation

Talking about the East Pakistan incident, he said that the people of East Pakistan were angry because they were not allowed their rights; further adding that the politicians had turned people against the army and resultantly Pakistan had broken into two pieces.

PTI Chairman said that Arshad Sharif was murdered because he stood for the rights. He had to leave the country and was eventually murdered. He said that free nations have their rights. He further said that the Chief Election Commissioner (CEC) who is like a pet to the Sharif family has been filing cases against me. He also said that he will take the CEC to the court to impose a fine.

Targeting Pakistan Peoples Party (PPP) Chairman and co-chairman he said that Bilawal could not learn Urdu in 14 years. Imran called out Asif Ali Zardari and said that he is coming to Sindh after being free from there.

He said that 30 FIRs including terrorism were lodged against him; If a senator like Azam Swati is tortured then think about what would have been done to a common man.