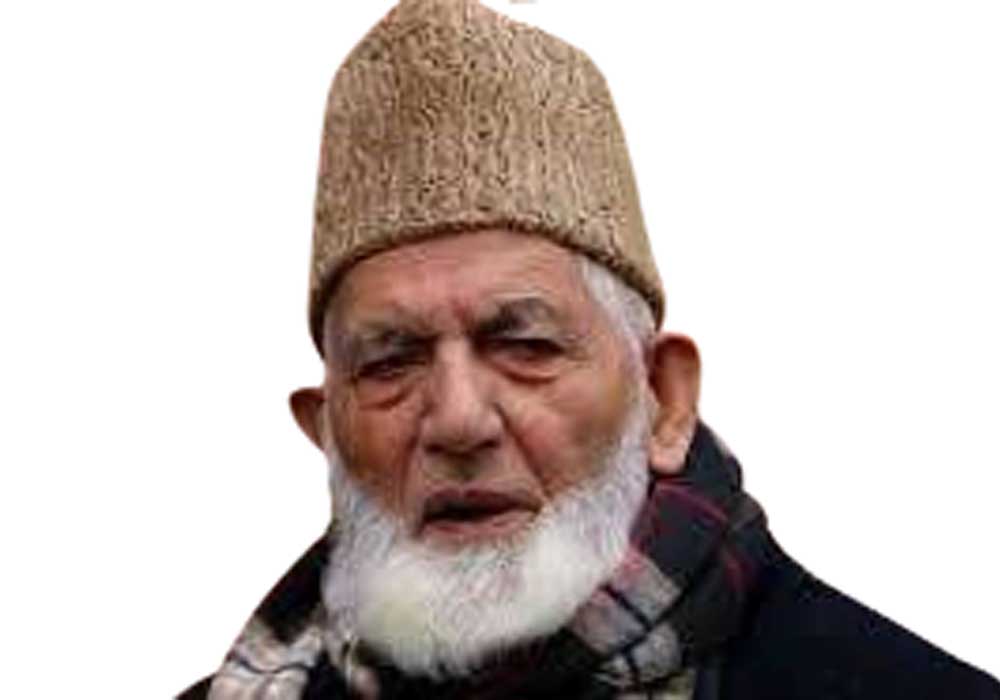 The top APHC leader and the icon of the Kashmir freedom movement, Syed Ali Gilani, embraced martyrdom while in detention at his residence in Srinagar on 01 September 2021 at the age of 92. He was a symbol of valour, courage and resistance against oppression and subjugation throughout his life.

Syed Ali Gilani, who had already been suffering from multiple ailments, remained under house arrest from 2010 till his death. This prolonged house detention took a heavy toll on his health. Syed Ali Gilani was born in Zurmunz in Bandipore on 29 September 1929. He was educated at Sopore and finished his studies at Oriental College, Lahore (Pakistan). He remained associated with Jamaat-e-Islami Jammu and Kashmir for the most part of his life but later founded his own party, Tehreek-e-Hurriyat Jammu and Kashmir. He led the All Parties Hurriyat Conference (APHC) until late June 2020 quitting the pro-freedom amalgam due to his worsening health condition. He was elected to the Kashmir Legislative Assembly in 1972, 1977 and 1987.

Syed Ali Gilani’s passport was seized by the Indian authorities in 1981 due to his pro-freedom and anti-India activities. Except for Hajj pilgrimage in 2006, he was never allowed to go abroad. He was diagnosed with renal cancer in the same year. As the doctors advised his treatment from abroad, the Indian authorities returned Syed Ali Gilani’s passport to his son. In 2007, his condition worsened, although in the early stages of cancer, it was life-threatening and surgery was advised. He was set to travel either to the UK or the US. However, his visa request was rejected by the American government and he went to Mumbai for the surgery.

On 06 March 2014, Syed Ali Gilani fell ill with a severe chest infection. He had been under house arrest since 2010. In May 2015, he applied for a passport to visit his daughter in Saudi Arabia but Narendra Modi-led fascist Indian government didn’t entertain his application.

Syed Ali Gilani spent many years in different Indian jails for opposing India’s illegal occupation of Jammu and Kashmir. He endured physical and mental torture during his imprisonment. On 29 November 2010, he, along with noted Indian writer Arundhati Roy, activist Varavara Rao and three others, was charged with sedition by the Indian government for their speeches at a seminar in New Delhi. The charges carried a maximum sentence of life imprisonment. After the 2019 Pulwama incident, India took stronger action against pro-Pakistan Hurriyat leaders including Syed Ali Gilani. India’s Enforcement Directorate levied a penalty of Rs 14.40 lakh and ordered the confiscation of nearly Rs 6.8 lakh in connection with a Foreign Exchange Management Act case against him.

On the orders of the Indian government in 2015, the residence of the veteran leader was converted into a sub-jail and the order was still in vogue when he breathed his last. After converting his residence and office at Hyderpora into a sub-jail, police also restricted the use of mobile and telephone services and barred the communication of the Hurriyat leader and other office-bearers with the outside world.

The occupation authorities had not only kept Syed Ali Gilani confined to his residence but also denied him proper medical care. As a result, he developed serious complications including breathing problems due to chest congestion and passed away on 01 September 2021.

The prominent APHC leader began his political career in 1950. He remained associated with the Jamaat-e-Islami Jammu and Kashmir for the most part of his life but later founded his own party, Tehreek-e-Hurriyat Jammu and Kashmir. He led the All Parties Hurriyat Conference and quit the pro-freedom amalgam on worsening of his health condition.

Syed Ali Gilani all along his life strived for the cause of freedom of Kashmir from Indian illegal occupation. He remained at the forefront of the Kashmiris’ struggle for the right to self-determination. He always advocated the resolution of the Kashmir dispute in accordance with the Kashmiris’ aspirations and the relevant UN resolutions on the issue.

Syed Ali Gilani was a staunch opponent of the Indian illegal occupation of Jammu and Kashmir and his stand on the Kashmir dispute invited the wrath of the Indian authorities. He spent more than 13 years in  IIOJK and Indian jails. He was first imprisoned in 1962 and was even booked under sedition charges for challenging India’s illegal occupation of Jammu and Kashmir. Indian rulers were even afraid of his dead body. It is evident from the fact that the Indian forces’ personnel snatched away the body of the veteran leader from his family and forcibly buried it in the darkness of the night in a local graveyard at Hyderpora around 300 meters away from his residence – preventing the family from fulfilling his will of burying him at the Martyrs’ Graveyard at Eidgah in Srinagar.

Syed Ali Gilani was the leader of the masses, a crowd puller, an intellectual, deep thinker, visionary, brilliant and articulate scholar and above all an institution by himself. He will always be remembered for his boldness, fair play, straightforwardness and his oratory skills. With his death, an era has ended.

The death of Syed Ali Gilani under house detention has further elevated his stature among the Kashmiris. The top APHC leader was already regarded as an epitome of dedication and sacrifice and will continue to inspire the struggling people of the territory in the times to come. He would continue to be viewed as an icon and great leader who strived for the sacred cause of freedom throughout his life, ultimately sacrificing himself for it. Syed Ali Gilani had remained an ardent supporter of Pakistan, a staunch freedom fighter along with his family and a symbol of resistance against the Indian tyranny all through his life. He staunchly advocated Jammu and Kashmir’s Accession to Pakistan.

Syed Ali Gilani who dedicated his whole life to Kashmir and its people spent his entire life fighting for the Kashmir cause and stood tall in face of endless persecution and occupation. His devotion to Kashmir and the suffering he endured for Kashmiris’ freedom will be remembered and honoured by generations to come as he never compromised his demand for a referendum to decide the future of Kashmir.

Aba dedicated his life to Islam and Kashmir’s freedom struggle. For him, the two have always been inseparable. This is why, even when he barely had the energy to breathe, he was either reciting from the Quran or talking about Kashmir. “Do not give up on freedom. Zulm chu ne poshaan! Oppression does not last!” Aba kept repeating as I spoon-fed him. He kept reciting it to himself, as if he was trying to etch those words into his memory so that he would not forget what he had stood for all his life, said the granddaughter of the leader.