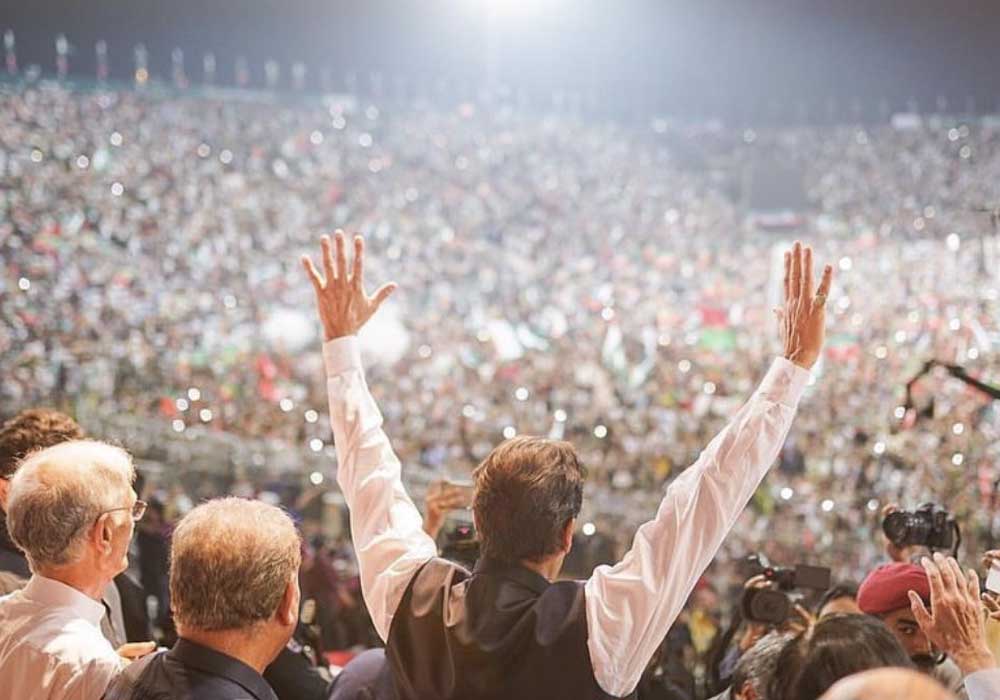 Pakistan Tehreek-e-Insaf (PTI) Chairman and former prime minister Imran Khan on Saturday announced another round of public rallies across the country.

Addressing a large and charged crowd at Lahore’s National Hockey Stadium, he said that he would go to the public once again as the war of ‘real independence’ has entered the final stage. “I’ll go to my people in Rawalpindi, Karachi, Sukkur, Hyderabad, Peshawar, Islamabad, Mardran, Attock, Multan, Abbottabad, Sargodha, Jhelum, Gujrat, Bahawalpur, Faisalabad, Gujranwala and Quetta,” Imran said, revealing his next plan of action. It should be noted here that earlier Imran ran a rigorous election campaign for the by-polls of Punjab by visiting every constituency personally and got the favorable results on July 17.

Earlier, addressing a large public gathering at the stadium on the eve of 75th Independence Day, Imran said that he wanted to make Pakistan an independent country as a slave nation “cannot progress further”. During his long speech spanning over more than one-and-a-half hours, he explained four types of slavery to the people present there. From Makkah to Madina and from Kufa to Karbla, Imran gave many examples from the Islamic history to further strengthen his point of view. “Don’t fear at all as it is the worst form of slavery. The people of Kufa knew that Hazrat Imam Hussain (AS) was right but they didn’t support him just due to the fear of Yazid,” Imran said, urging his supporters to break the shackles of slavery and fear.

Talking about his thoughts on the United States, Imran said that he was not anti-American and wanted friendship with the US, but not slavery. Earlier, the former premier used to mention it repeatedly in his speeches that his government was ousted through a conspiracy hatched by America in collaboration with local politicians. He played different videos of PML-N leaders, including Defense Minister Khawaja Asif, Prime Minister Shehbaz Sharif and former premier Nawaz Sharif, in which they were talking about the US. Imran said that the incumbent defense minister had said that “we’ll die if we refuse to remain slaves” to America, and added that the “crime minister” (prime minister) was just begging for aid from the US. He went on to say that he had pursued friendship with the US but was not accepting their slavery and therefore his government was ousted through a conspiracy. He said that his government was ousted because he visited Russia to get relief for the people of Pakistan.

Imran Khan also revealed the plan of the unity government of the Pakistan Democratic Movement (PDM) as he said that attempts were being made to bring back Nawaz Sharif from London in September.

“It is impossible to treat me and Nawaz Sharif equally. He is a thief and plunderer, while I am the person who brought money back to Pakistan,” said Imran, reiterating that he and Nawaz could not be treated the same way. He further said that another conspiracy was being hatched to put the PTI and the Pak Army in confrontation with each other. “It is just like we did in East Pakistan when the largest political party was put in the confrontation mode with the army and then we all saw the tragic incident of our history known as debacle of East Pakistan,” he said. Imran said he didn’t want to see a weak army as “I always want to see a strong army for Pakistan”.

Speaking on the occasion, Punjab Chief Minister Chaudhry Parvez Elahi said that “we will take forward the politics of Imran Khan”. He said that he had the same manifesto: that the people should be served. He said that he had launched Rescue 1122 project, adding that his government had ensured free education and curriculum for the people. “The real appreciation is one which other people do. The World Bank president appreciated our education system. The dream of making Riasat-e-Madina which Imran Khan saw… we will set up the same system of government. We will do away with the interest system.”