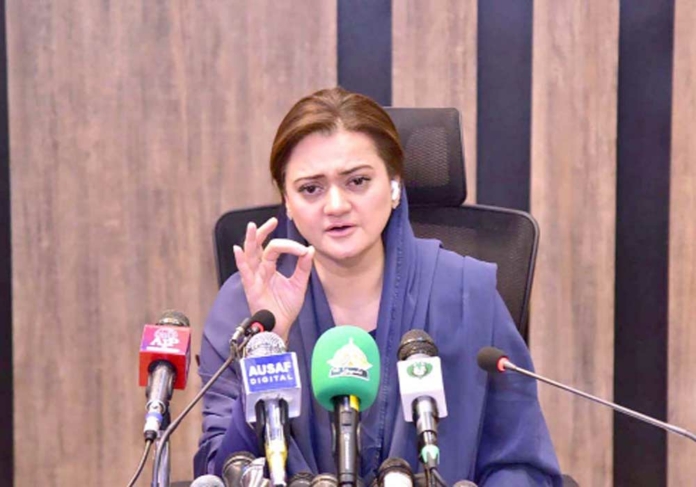 Minister for Information and Broadcasting Marriyum Aurangzeb on Tuesday warned the citizens against PTI Chairman Imran Khan who, she said, was bent upon misguiding the public with his persistent ‘lies and fabricated narratives’.

“The people should save themselves from the ‘absolutely fraud and foreign-funded Fitna’ (Imran), who laughs at them behind closed doors after befooling them,” Marriyum said while addressing a news conference. “Liar is the only term which can perfectly define the personality of Imran Khan,” she stated, referring to his “repeated lies”, aimed at misleading the nation. The minister claimed: “President Arif Alvi, who once held the post of Secretary General of PTI, has declared Imran Khan a liar and endorsed that this person speaks nothing but lies.”

Imran Khan, she said, spent his complete energy on creating narratives to cover up his “thefts, hypocrisy and lies” by misleading the public. In fact, she said, Imran had assumed that the people would start believing “the lies and accusations if the same are repeated ad nauseam, she stressed. However, “this drama will come to an end when the people will start realizing that he is a liar and ‘foreign funded Fitna'”, she added. The people should ask themselves how a person could take oath on the same Constitution which he had violated in the past.

Pointing out Imran Khan’s inquisitive trait, she said the Pakistan Tehreek-e-Insaf (PTI) chief started questioning others, rather hurling allegations when asked about his own loot and plunder of the national wealth. Ironically, when Imran Khan was asked about the foreign funds received by his party, he started demanding accountability of the other parties, she said. The PTI had failed to furnish even a single piece of evidence before the ECP about other parties which could prove that either they had received funding from a foreign national or company.

Imran Khan should better answer about his own party’s foreign funding, which had been validated by the decision of the Election Commission of Pakistan (ECP) in the relevant case, she added. The minister urged the people to connect all the dots and view the PTI’s foreign funding in the context of its four-year rule, which was marred by flawed economic and political policies. Besides, Kashmir was also sold by the Imran Khan led government, who even campaigned for Modi during the last general election in India by tweeting in his favour, she alleged.

Marriyum also played the video clips of Imran Khan’s interviews with two different TV channels, which showed his contradictory statements on the phone tapping of the Prime Minister’s Office and the PM House. She said Imran Khan in the first place legitimized the phone tapping of the PM House and then took a U-turn after his own audios got leaked in which he could be heard saying that “We have to play with the cipher”.

The PTI chief’s narrative of a foreign conspiracy against his government was done and dusted as President Arif Alvi had stated that he did not agree with the same, she added. Reacting to the PTI chief’s announcement of moving the court regarding the audio leaks, she said “The foreign-funded ‘Fitna’ (Imran) should first appear before the joint investigation team (JIT) instead of going to the court. He has confessed his crime and it is now time for him to be in jail.” She asked how could a person who legitimized the phone tapping of the PM House and PM Office go to court for its investigation. “There is no need of that,” she added.

The minister claimed that Imran Khan misused the state machinery while being in power for four years to victimize his political opponents, but could not produce a single piece of evidence of the latter’s crimes in the courts. She alleged that Imran Khan abducted Tayyba Gul to blackmail the then National Accountability Bureau chairman and coerced the then FIA director general for filing fabricated cases against the Pakistan Muslim League-Nawaz (PML-N) leadership.

Imran Khan sent Nawaz Sharif, Prime Minister Shehbaz Sharif and Maryam Nawaz and other PML-N leaders to jail in false and fabricated cases, she added. Marriyum said the PML-N leaders were eventually exonerated in all the fake cases and now Imran Khan stooped so low to name them in his speeches just to achieve his political motives. The minister rued the promises made by Imran Khan with the people for coming into the power which included 10 million jobs, 5 million houses and zero-corruption in 90-day time. But ironically, he himself was exposed as a ‘thief and corrupt person’, she added.