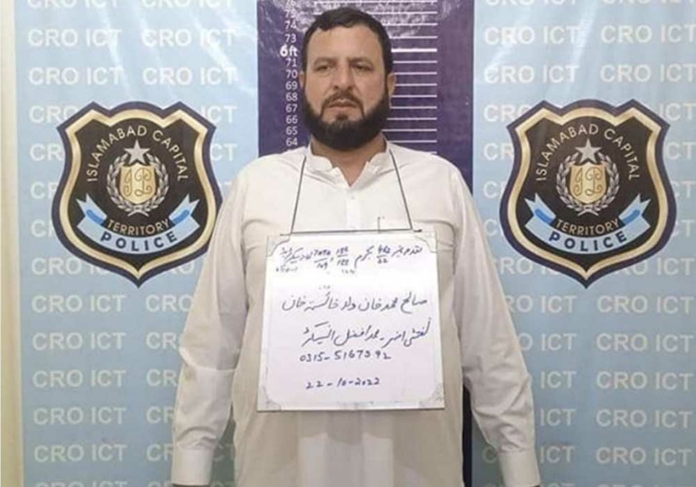 The Islamabad police have booked the senior PTI leadership, including former prime minister Imran Khan, on terrorism charges in the wake of protests after his disqualification by the Election Commission of Pakistan in the Toshakhana reference, it emerged on Saturday.

In reaction to the ECP decision, PTI workers across Pakistan took to the streets on Friday to protest the decision against their party chief. Party chief Imran Khan later called for an end to the protests.

In Islamabad, a PTI MNA was arrested along with his two police guards by the capital police over an alleged firing incident outside the ECP office.

Faizabad, the border between Punjab and the federal territory, remained a site of clashes between the police and PTI workers and thick clouds of tear gas enveloped the interchange.

The first information report (FIR) against the senior PTI leadership was registered on Friday on the complaint of Station House Officer Shams Al Akbar at Islamabad’s Sangjani police station.

The FIR said that a police force was stationed at Srinagar Highway and Sector G-13 and around 100 people carrying PTI placards and sticks had blocked the highway, causing traffic going towards Islamabad to be impeded.

The report alleged that the crowd was informed via loudspeaker about the implementation of Section 144 and was also told to clear the road for traffic. It added that instead of heeding the police, they resorted to physically assaulting, attacking and pelting officers with stones.

The FIR said that the PTI workers had defied Section 144 on the instructions of Imran, PTI Secretary General Asad Umar, Ali Nawaz and others; disturbed the public’s peace and security; spread fear and harassment among the public; blocked the road and threatened dire consequences.

Separately, Awami Muslim League chief Sheikh Rashid has accused Islamabad police of raiding his home in the early hours of Saturday, although the latter denied conducting any such activity and said the accusation was “not based on facts”.

Rashid alleged that the police raided his residence in the capital at 12:30am while he was at his Rawalpindi residence, famously called Lal Haveli.

It is pertinent to mention here that PTI chief Imran Khan, of whom Rashid is a key ally, was disqualified by the Election Commission of Pakistan on Friday in the Toshakhana reference, prompting protests and clashes with the police in parts of the country.

Responding to Rashid’s tweet, the Islamabad police said no political leader or worker’s house was raided the past night in either the federal capital or Rawalpindi. It also warned of taking legal action again what it said was “false statements”.