Says PTI leadership is making efforts to create chaos, anarchy in the country 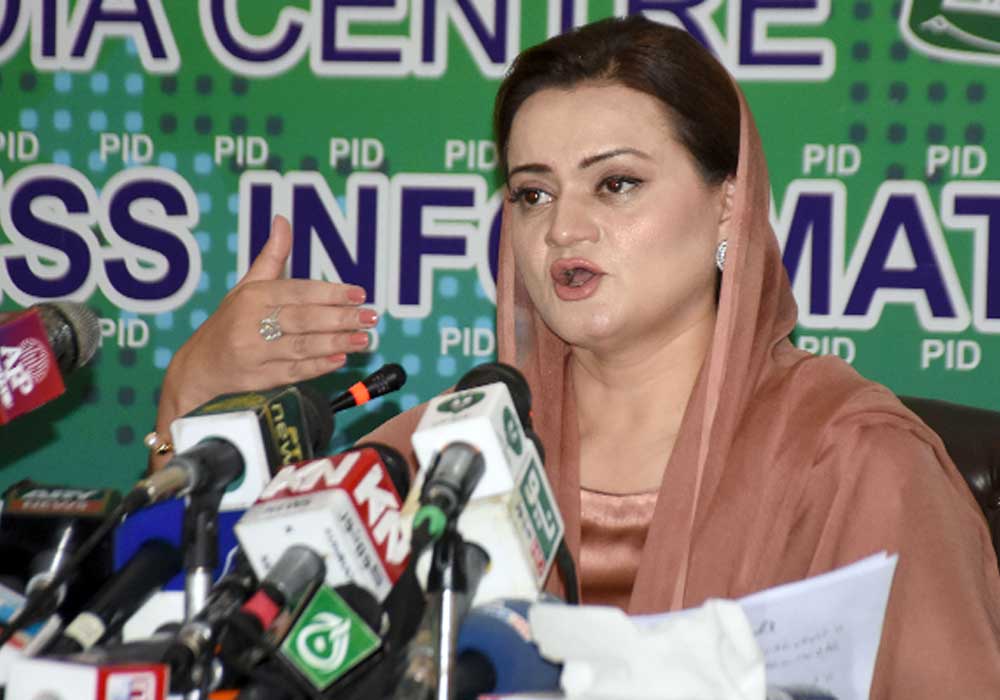 Minister for Information and Broadcasting Marriyum Aurangzeb said on Thursday that Pakistan Tehreek-i-Insaf (PTI) Chairman Imran Khan was trying to divert public’s attention from his foreign funding and Tosha Khana case by playing a ‘toxic game’ against the state institutions which included a “despicable” social media campaign against the military martyrs.

“Imran Khan cannot divert the attention of the nation from foreign funding which was used to weaken the country’s defence. Foreign agent Imran Khan submitted false affidavits with the Election Commission of Pakistan (ECP) for five years,” the minister said while addressing a press conference here.

Castigating Imran Khan, she said that for four years, the country was ruled by an “incompetent” and “inefficient” Prime Minister, who plundered national resources ruthlessly and deprived the people of job opportunities by implementing bad and anti-poor policies.

She said the PTI had been declared a foreign-aided party by the ECP for receiving funding from foreigners for a period of five years (2008 to 2013).  According to the ECP’s verdict, she said the PTI received prohibited funding from 351 foreign companies and 34 foreign nationals.

“Imran Khan has also taken prohibited funding from companies in Pakistan which was undeclared,” she maintained.

She said as Imran Khan had disgraced the PTI, it was high time for the workers to ask him why he turned it into a foreign-aided party.

be done.  However, the FIA was investigating the source and utilization of the funding received during the said period.

The minister lashed out at Imran Khan for implementing a conspiracy to damage the country in exchange for foreign funds. As regards the PTI’s social media campaign against the state institutions, she said Imran Khan ran a “dirty drive” against the martyrs of helicopter crash through his trolls.

Marriyum said Imran Khan’s chief of staff read an “obnoxious transcript” on the ARY News channel which was authored by the PTI chairman himself.

“Red lines were crossed in this transcript as they (PTI leadership) had planned to incite rebellion in the armed forces of Pakistan,” she said.

The minister said that yesterday when Imran Khan was hurling allegations at others, he should have told how much money he took from foreigners.

She said that Arif Naqvi was Imran Khan’s front man who collected funds in the name of charity which was used by Imran for political purposes.

She said that four employees of the PTI Secretariat namely Tahir Iqbal, Mohammad Arshad, Nauman Afzal and Mohammad Rafiq had recorded their statements and disclosed that blank cheques were taken from them and they had no idea where this foreign funding came from and where it was spent.

The minister asked whether the money taken from 351 companies was spent on making a compromise on Kashmir, destroying the country’s economy, rendering the youth jobless, committing robberies in the country and weakening the country’s defence.

The minister said that due to Imran’s policies Pakistan’s relations with many friendly countries turned sour.

She said when foreign funding money had been seized, now the PTI leadership was making efforts to create chaos and anarchy in the country and a conspiracy was hatched to create a rift among the national institutions.

She said that Imran Khan could not compare himself with Nawaz Sharif who made this country a nuclear power, launched the game-changing mega project CPEC and strengthened the defence of the country.

Imran Khan, she said, forced the personalities in the constitutional positions to violate the Constitution.

Marriyum said Imran Khan registered false cases against Nawaz Sharif, Shehbaz Sharif, PML-N leadership, and the family members of the opposition leaders while being in power.

Meanwhile, Special Assistant to the Prime Minister Attaullah Tarar said the ministers of the Punjab cabinet and the leadership of PTI did not condemn the ‘seditious’ statements of Shahbaz Gill which reflected that it was in fact the true policy of the party.

Addressing a press conference here, Tarar claimed that Gill had confessed during the ongoing investigation that he had given the statement in line with the party’s policy.

Separately, Minister of State for Petroleum Musadik Malik on Thursday said PTI’s anti-state behaviour reflected the ‘disloyalty’ of its party chief Imran Khan to the nation whose leaders had a habit of maligning national institutes for personal gains.