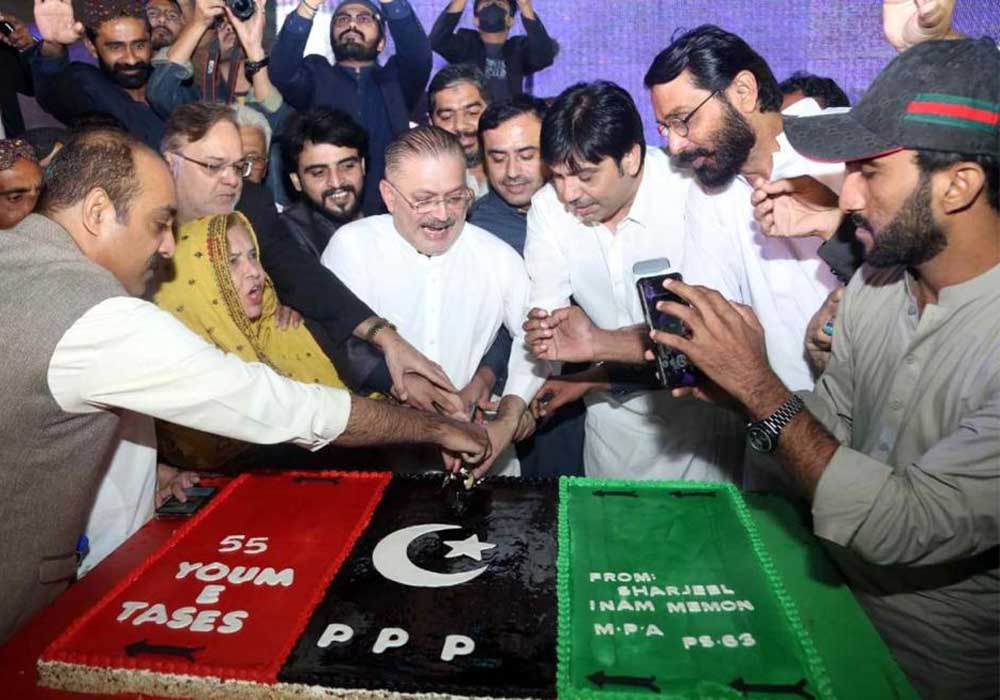 Sindh Minister for Information and Transport  Sharjeel Inam Memon has asked Imran Khan to first seek resignation from President Dr Arif Alvi before resorting to, what he termed were, blackmailing tactics.

Addressing a big public gathering at Rahuki in his home constituency in Tando Jam on Tuesday, Memon and others said PTI Chairman Imran Khan failed to gather even a few thousand people during his so-called Azadi March on Saturday. He said both Khan and his party’s people are hungry for power and perks and added that they would never resign from the Assemblies, and termed his announcement in this regard as another gimmick to subdue his supporters. Memon said that the PPP government in Sindh has always tried it’s best to provide relief to its people.

He said that on the short notice he had arranged a bigger gathering in his home constituency ahead of the foundation day of the party. Memon said that the announcement of resigning from all the assemblies is a conspiracy to fool the people. He added that Imran Khan staged the so-called Azadi long march to get the date for the next general election but ended with the announcement of resignation from the assemblies. If they are serious about resigning, Imran Khan should show grace and start the resignations with President Arif Alvi and ask him (Arif Alvi) to resign forthwith.

He said that Imran Khan had not launched a single project for the welfare of the people during his three and a half years of government, and wasted his entire tenure suppressing his political opponents. Now, he (Imran) wants to stop the coalition government from launching any public welfare project in remaining one year tenure of present assemblies. He said that Imran Khan was following a one-point agenda to cause damage to the country in one way or other.

He added that state institutions were again targeted in the public gathering in Islamabad the other day. Imran Khan’s way of politics was not good for Pakistan. He said that negative approach in politics was the biggest reason of failure of Imran Khan. The current ruling coalition, he said, would continue the struggle for the development, prosperity and democracy in Pakistan.

Memon said that Saturday’s meeting of Imran Khan was a corner meeting, in which people were invited from all over Pakistan, but not even a single road could be filled. He said that the day is not far when Imran Khan would be behind the bars, and claimed there are reports that rooms of Adiala Jail are being cleaned (for Imran). He recalled that Imran Khan had announced resigning from National Assembly but few months later, his elected MNAs from Lyari and Jacobabad took a U-turn and said that he had not resigned. The provincial minister said that PTI would not be allowed to run away from the field in that manner. He added that present government would also remove them in the political way very soon as per the vision of its leadership.