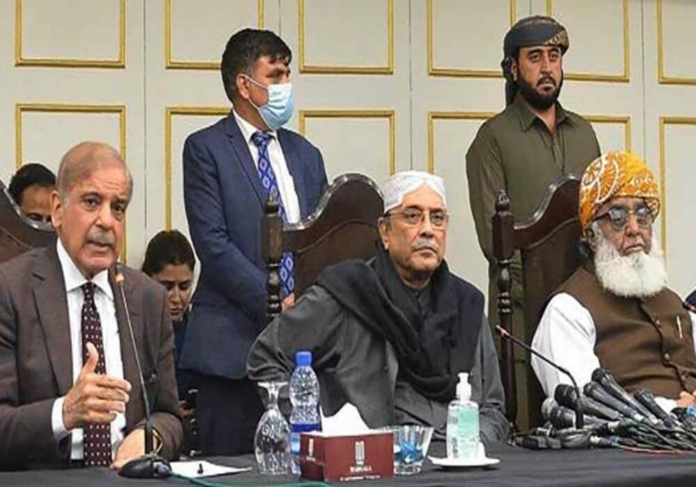 The coalition government on Monday categorically rejected Pakistan Tehreek-e-Insaf (PTI) Chairman Imran Khan’s demand of early elections and said the allies would decide about the timing of the elections in the country.

In a joint statement, the government allies said no group on the basis of its power would be allowed to impose its will.

“Those who would take law into their hands would be dealt with according to the constitution and law.”

They said the prime minister of Pakistan would decide about the appointment of the army chief and it would not be done because of pressure of the foreign-funded anarchist or threats and dictation.

“The targeting of the army chief, leadership of the intelligence agencies, officers, chief election commissioner and others was blackmailing and not a political attitude but part of a conspiracy which would not be allowed to succeed.”

According to the statement, a person deprived of power was targeting national institutions according to a well-thought-out agenda.

“The dirty campaign against the martyrs of Pakistan Army, statements about mutiny in the army and instigation were the steps akin to animosity against the country and would be dealt with according to the constitution and law. The hooliganism and pressure tactics would not be allowed to make the constitution, democracy and system hostage.”

It was clarified in the statement that the economy of the country and rehabilitation of the flood victims at this time was a national priority and no compromise would be made on it. “The government, institutions and the system are unanimous that political instability will not be allowed, rather the process of putting the economy back on track and provision of assistance to the flood victims will not be allowed to be affected.”

Meanwhile, Pakistan People’s Party Parliamentarians (PPPP) President Asif Ali Zardari termed the recent statement by a “conspirator” against national institutions and its heads as part of an international conspiracy with the main objective to weaken them.

In a statement issued by the party secretariat, Zardari said the conspirator had become obsessed with his lust for power.

He warned that all actions of the conspirator who attacked the integrity of Pakistan and its institutions by taking dictations from across the border would be met with a befitting response.

During the regime of Imran Khan, the institutions were badly used to fulfill his personal ambitions and the current government was busy trying to repair the damage caused to the reputation of the institutions by the PTI chief, he said. “The government will defeat every conspiracy of this person,” Zardari concluded.

According to reports, the duo also discussed the reasons for the PMD’s defeat and Imran Khan’s victory in the by-elections held on October 16.

They agreed not to bow down to any pressure and that elections would be held on time. They further said that the allied parties would decide when the election would take place in the country.

Meanwhile, Nawaz Sharif expressed annoyance over his party’s “worst defeat” in Sunday’s by-elections and directed the party officials to set up a fact-finding committee on the by-poll drubbing.