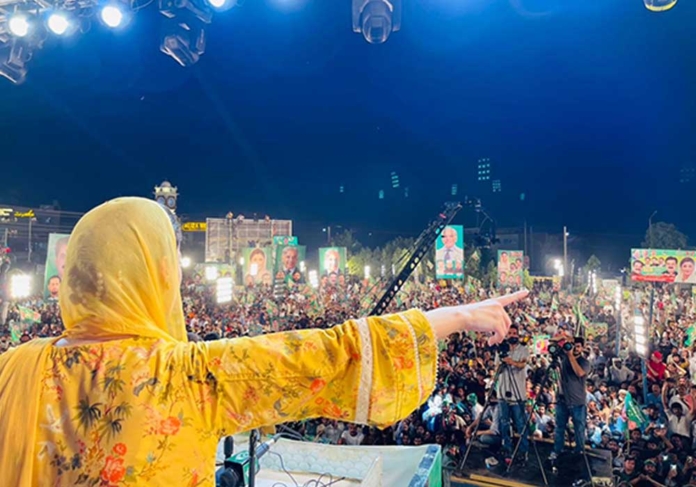 Pakistan Muslim League-Nawaz (PML-N) Vice President Maryam Nawaz once again came down hard on former prime minister Imran Khan and his party – Pakistan Tehreek-e-Insaf (PTI) – on Monday, saying that the ex-PM staged “the biggest drama in the history of Pakistan under the name of foreign conspiracy”.

Addressing party supporters in the PP-170 constituency as part of the election campaign, she said, “Unfortunately, Pakistani politics met a person who is the biggest liar, chaos-maker and imposter. He used to say to people that we are US slaves. He kept people busy with his conspiracy claims. This is the biggest drama in Pakistan’s history.”

She termed the PTI chairman the biggest enemy of Lahore and Punjab, and said the upcoming by-polls were a “war for development of the province”.

“The enemy of Punjab’s development is Imran Khan,” said Maryam. She told the former prime minister that the “funeral of his politics” would emerge not just from Punjab but all over Pakistan.

“The gang ruling Punjab was not governing but was looting the treasury. The ringleader of this gang was Imran Khan, who ruthlessly looted resources,” said Maryam. She added that the gang included the former prime minister, the former first lady and her friend Farhat Shahzadi.

“A gang was ruling a province of 120 million,” said Maryam. She added that the former prime minister had created “Gogi Pinky Economic Corridor” to loot the treasury.

“The war on July 17 is a war for the development of Punjab, it has to be won,” said Maryam.

Continuing her attack against the former prime minister, Maryam said that the PTI chairman had asked the people “to believe a conspiracy” but two days ago he sent his party office-bearers to US official Donald Lu to seek forgiveness.

“He used to call people traitors and today his wife’s audio clip has surfaced,” said Maryam. She added that the cricketer-turned-politician was the “biggest imposter”.

“[Imran Khan] was unable to prove a single allegation against me and the audio clip of his wife has come out. The one who called people thieves turned out to be the biggest culprit,” said Maryam. She added that allegations were made against the PML-N supremo as well but none of them could be proven.

“Whoever leaves his party has tales of corruption to tell,” said Maryam.

Referring to the economic situation of the country, the PML-N vice president said that her party, which is ruling at the centre, will work day and night to get the people out of the tough situation. She added that the coalition government was working to provide relief to the poor.

“The treasury is empty and despite that Shehbaz Sharif gave a subsidy on food items at utility stores,” said Maryam.

While informing the people of the Punjab CM Hamza Shahbaz’s announcement regarding electricity bills, Maryam asked them whether it had happened in the country’s 75-year history that people were asked to consume power but they would not be charged for it.

On Sunday, the PML-N leader had said that the ruling coalition government raised the prices of petroleum products with a “heavy heart”.

She blamed former prime minister Imran Khan for rising inflation in the country, saying that the agreement his government did with the International Monetary Fund (IMF) was causing the prices to soar.

Blaming the previous PTI government for hours-long load shedding in the country, the PML-N leader said that the PML-N government had resolved the chronic issue in the past but it re-emerged due to the incapable PTI rulers.