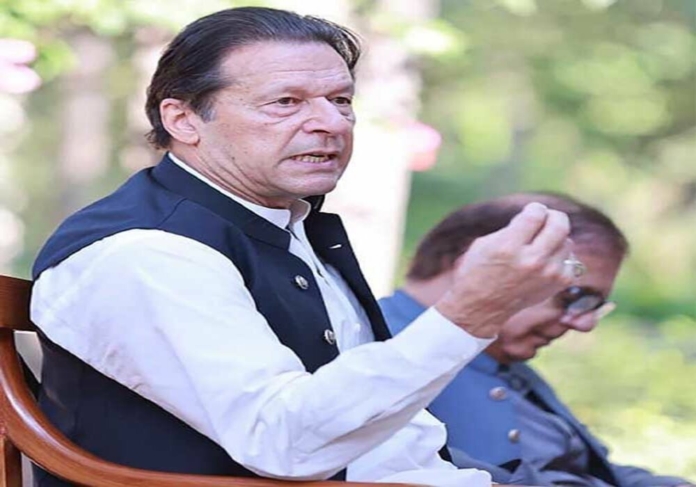 Addressing a hurriedly called press conference at 90-Shahra e Quaid-e-Azam (Chief Minister’s Office) in Lahore on Tuesday evening, the former prime minister revealed that he will himself lead the long march from Lahore’s Liberty Roundabout on coming Friday at 11am. “We’ll reach Islamabad via GT Road where people in large numbers will also join us. It will be the biggest gathering in the history of Pakistan as people from all parts of the country will be there,” Imran said. Elaborating the purpose of his march, the PTI chairman said that it is not politics but ‘jihad’ which he is doing for his nation. He added that he has proved on many occasions that the public is with him. “No one held such huge public gatherings in this number as I did during last 6 months,” Imran said, pleading his case that he is the most popular leader of this time.

He was of the view that he has been doing politics for the last 26 years and his workers are peaceful, but any mischief cannot be ruled out at the hands of federal government to create the situation of law and order.

Earlier, Imran Khan said that his government faced three long marches when he was in power but he didn’t use force to hamper them. “Two long marches were staged by Fazlur Rehman while one was staged by Bilawal. Maryam Nawaz also tried to hold her long march but it couldn’t even reach Gujjar Khan,” said Imran. “It was the time when we were already hit by the Covid-19 and facing economic challenges but we let them come to Islamabad without using any force against them,” he said. He added that the PTI staged a march on May 25 but the state force was used against the workers. “We protested peacefully on 25th May but force was used against us. It was heading towards a bloody end and therefore I called it off to avoid any further confrontation,” the former PM said.

Earlier, elaborating the purpose behind his long march, Imran said that thieves were imposed on us as a result of a foreign conspiracy with the help of some domestic handlers. “MNAs were purchased by offering millions in Sindh House and then our government was toppled. We launched our protest against this foreign conspiracy and our workers were attacked with tear gas,” he said. He added that the PTI won the by-polls and proved that it is the most popular party of the country. After being scared of PTI’s popularity, they started lodging FIRs against us, he added. “I am facing 24 FIRs alone and police twice came to arrest me. The entire leadership of PTI is facing FIRs just because of our popularity,” he added. “Media is also under siege in the country. What did they do to Imran Riaz, Sami Ibrahim, Ayaz Amir and Arshad Sharif?” he questioned. “I never saw in my life what they did with Arshad Sharif who didn’t compromise on his principles.”

According to Imran, the incumbent rulers were imposed to do person-specific amendments only to hide their corruption. “We’ll not accept their slavery. This march is meant to get real indolence and everyone should become its part,” he said. “I only want one thing: let the people of Pakistan decide who will rule here and not any foreign country,” the PTI chairman said. To a question related to his backdoor contacts with the powers that matter, Imran said that political parties always resolve issues through dialogue and his doors were still open for negotiations. “Doors are open for political dialogue but they will not hold elections anytime soon,” he said.

Talking about the likely use of force against the marchers, Imran said there would be no violence from “our side” but the federal government can attempt to create a law and order situation. “Don’t try to do anything wrong. No one will be able to handle if the situation gets out of control in Islamabad,” he warned.

Meanwhile, Interior Minister Rana Sanaullah on Tuesday urged Imran Khan to avoid creating a law and order situation in the federal capital during protest demonstration or long march. Talking to a private television channel, he said all important measures were being taken to stop the PTI from disturbing peace in the federal capital.