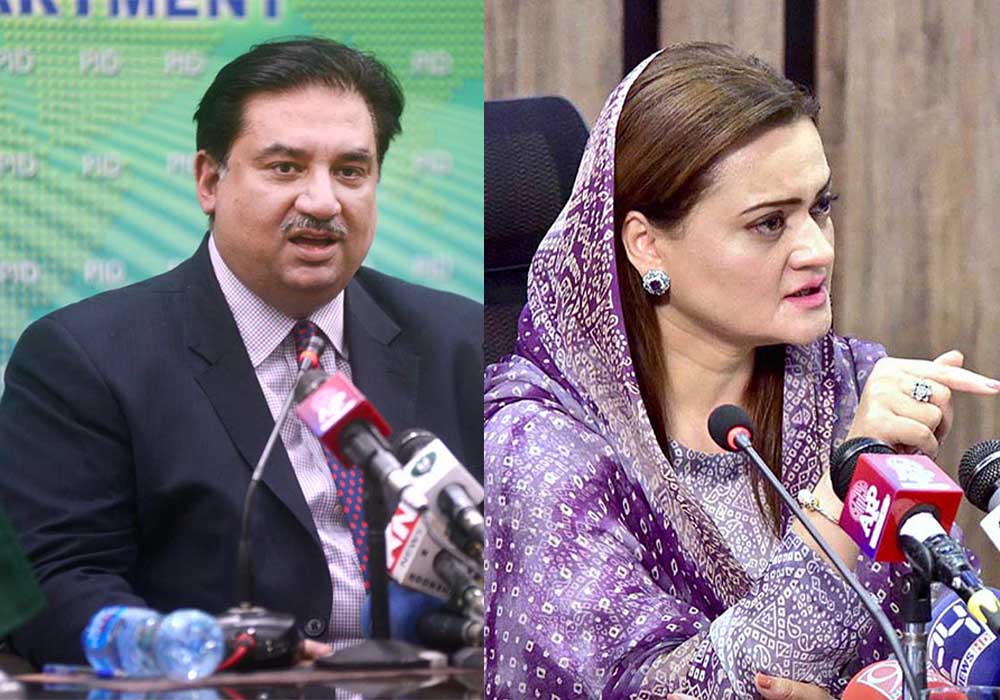 Minister for Information and Broadcasting Marriyum Aurangzeb on Wednesday said both Imran Khan and his wife Bushra Bibi tasked the Pakistan Tehreek-i-Insaf’s (PTI) social media teams to troll the army top brass and its martyrs for diverting public attention away from its foreign funding which had been proved after eight years.

“PTI did trolling of the army’s martyrs. Bushra Bibi would have asked ‘Arslan Beta (son)’ to run malicious campaign on martyrs when the party foreign funding came under discussion on public platforms. These directives directly came from Bani Gala,” she said while addressing a news conference here.

Referring to the PTI leader Shehbaz Gill’s statement in the media, she said Imran Khan was playing a “dangerous game” as call for mutiny in the army’s rank and file was a red line which nobody would be allowed to cross at any cost.

The minister said Imran Khan’s spokesman and chief of staff had started admitting that a script of his interview with ARY News channel was given by the PTI’s chief.

“He (Gill) will become an approver in this (sedition) case,” she added.

She said those who trolled army officers and its martyrs had also got caught and started admitting that the campaign was run on the directives of the PTI leadership.

The joint investigation team probing a “malicious campaign” against the army martyrs on social media will soon bring facts before the public to prove who the architect of this entire saga was, she added.

“Enough is enough,” she said while announcing zero tolerance against those who would try to incite division within the state institution, and make efforts to spread chaos and anarchy in the country.

She, on the occasion, played some clips of Imran Khan’s interviews with various local and international media channels in which he spewed venom against the state institutions, to assert that the PTI’s chief was a “fascist person” who was bent upon destroying the country in exchange of the funding received by his party from foreign nationals and firms.

“These are a few statements of Imran Khan, rest is the history,” she said, adding the current campaign against the army martyrs reflected his fascism and the “dirty politics” which entirely based on hatred, deception, lies and anarchy.

Marriyum said Imran Khan was reaping what he had sown in the politics i.e. hatred and animosity.

“No patriot can even think of trolling the Pakistan Army soldiers and officers who sacrificed their lives while carrying out rescue and relief activities in the flood-hit areas,” she remarked.

She regretted that Imran Khan could use the KP’s government helicopter for creating chaos and anarchy in the country, but not to visit the flood-affected areas and people in Balochistan and South Punjab on instructions of his wife who barred him from attending a funeral or a place where deaths occurred.

The minister lashed out at Imran Khan for claiming that an “illusionary” media cell of Pakistan Muslim League-Nawaz in collaboration with the government was involved in running a campaign against the state institutions.

She said Imran Khan got scared by the reaction from the families of the army martyrs and his body language suggested that he was frightened by the decision in the prohibited funding case by the Election Commission of Pakistan.

Marriyum said it had been proved that Imran Khan did receive prohibited funding and spent donations for the political and personal purposes.

“The party of a foreign agent has been declared a ‘foreign-aided party’ under the Political Party Ordinance, 2002 and the Election Act, 2017,” she remarked.

She said Imran Khan was now afraid that his party would be banned, but it was him who destroyed the party.

Meanwhile, Minister for Power Khurram Dastgir reiterated the resolve to strengthen democracy besides combating fascist attitudes in the country.

Addressing a press conference, the minister said the PTI chief started fascism in 2014 and promoted hatred in the country. Imran Khan not only promoted undemocratic attitudes but also openly invited people for civil disobedience through torching electricity bills, he added.