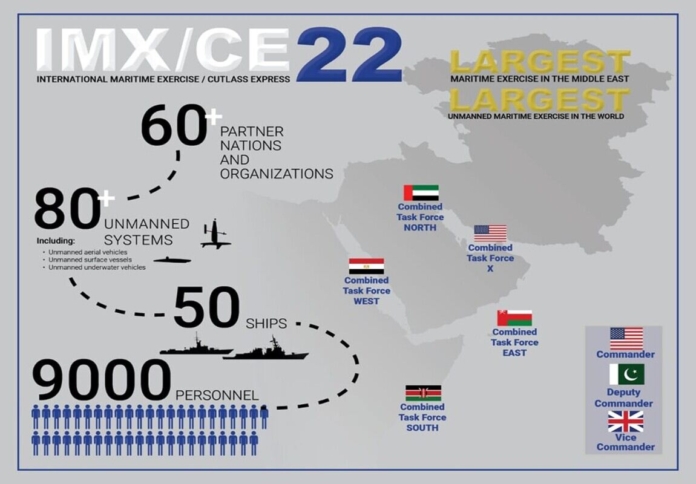 The interconnectedness of nations has globalised maritime affairs, increasing its significance more than ever. The advancing activities conducted via sea routes have their pros as well as cons when it comes to geostrategic significance and security in terms of national and international waters. One of such efforts is the International Maritime Exercise 2022 (IMX 22), a multinational maritime exercise under the US Naval Force Central Command (NAVCENT) determined to provide tools for promoting regional and global peace and security. The aim of IMX 22 is to maintain freedom of navigation and free flow of commerce throughout the region’s diverse maritime environment. IMX 22 provides a noteworthy opportunity for Pakistan Navy to contribute towards maritime security and to enhance interoperability with regional navies while mitigating non-traditional threats prevalent in the maritime environment. In addition to providing naval assets, Pakistan Navy has also assumed the duties of deputy commander for the exercise. However, the United States invitation to Israel for joining the exercise has got many to speculate the unnecessary prospects of Pakistan and Israel’s collaboration.

Pakistan is a zealous contributor to maritime security. It has not only participated in international exercises such as CTF but also hosted an exercise AMAN to counter the growing maritime threats. IMX 22 has been initiated to deter illicit activities in the region.

The exercise includes combined training of 9,000 personnel and up to 50 ships from more than 60 partner nations and international organisations. IMX 2022 is not only the largest multinational naval exercise in the Middle East but also the largest unmanned maritime exercise in the world with more than 80 unmanned systems from 10 nations participating. Task Force X is dedicated as the unmanned task which leads the unmanned systems and works across the other task force commanders through a series of 14 plans serial, also known as training scenarios.

The unique feature of the exercise is the unmanned assets which mean the exercise will include aircraft (UAVs) which do not require any manpower and will be used in terms of the show of strength, to distribute and to share the artificial intelligence and data collection weapons with the participating countries. So far, nothing has been revealed as to which 10 countries will be bringing the unmanned systems. However, the US has revealed several of its unmanned assets which will be included in the exercise such as the Devil Ray T-38, Triton, Switchblade 300, Ghost 4, wave Glider Mantas T-12 and other assets used for intelligence, surveillance, reconnaissance for staging and deploying other unmanned weapons.

Pakistan is esteemed to be a part of IMX 22 as the deputy commander. Such opportunities do not come time and again for Pakistan to develop its global image worthwhile. Since Pakistan has been untiringly dedicated to maritime security, participation in the exercise will only help portray its greater image and rectify its historical contributions of spreading peace. In the meantime, its participation is raising the question of its collaboration with Israel.

International organisations work towards collective good; therefore, no state has any plans for further collaborations. Participation in IMX 22 will not bring forward any collaboration between the two countries. Participation in international coalitions has never been a platform to bring countries together unwillingly. One such example is the United Nations. The United Nations has so many member states – including Israel – and the country’s other nemesis, which has not affected any of Pakistan’s involvement whatsoever. Such international coalitions aim for countries to co-exist and fight for commonly faced illicit activities.

IMX 22 is solely dedicated to securing the region from the non-traditional threats present in the regional waters. In order to stop illicit activities such as piracy, smuggling arms and ammunition, drug, and human trafficking and to secure the energy lines, every country in the region was assigned the role of a policeman by the United States. Naval experts have highlighted that the type of participation Israel is supposed to have in the exercise is still not mentioned. Even so, their activity area will be the Red Sea, whereas in the exercise Pakistan’s area of concern will be the Arabian Sea. Both the countries will be present in the exercise but will be participating in different groups based on their area of concern. Besides Pakistan, many Muslim countries are a part of the exercise, including Bahrain, Yemen, Saudi Arabia, Turkey, Oman, Sudan, Jordan, Egypt, Bangladesh and others. All these countries share a similar interest in protecting and securing the maritime environment close to their region from non-traditional threats.

Questions have been surfacing about whether or not Pakistan should be a part of the exercise. The US 5th Fleet area of operations encompasses nearly 2.5 million square miles of water area and includes the Arabian Gulf, Gulf of Oman, Red Sea, and parts of the Indian Ocean. The region is comprised of 20 countries and includes three critical choke points at the Strait of Hormuz, the Suez Canal, and the Strait of Bab-al-Mandeb at the southern tip of Yemen. Pakistan is a vertical state with its feet in the Arabian Sea. The geostrategic significance of the country is such that with Gwadar and Gomera, all the crucial energy and oil transport takes place through the Arabian Sea. Not only is the country politically consequential but its sea routes are equally crucial and need to be secured. With such exceptional positioning, Pakistan is also in a revered position as the deputy commandant of the IMX 22, which gives more reason for its participation. If the participation is given up, the position of deputy commandant may fall upon any of Pakistan’s nemesis, which may create further tensions for the country’s maritime security.

Speaking on the matter, a naval expert said, “Participation of Pakistan Navy has no regional or religious connotations, nor does it hold any influence on changing the foreign policy of the country by participating in IMX 22. Pakistan Navy will continue to maintain its historical role as a provider of maritime security and torchbearer of peace in the region.”