In contact with Kenyan counterpart for investigation of Arshad Sharif’s murder: DG ISI

Names as Mir Jafar and Mir Sadiq were given after denial of taking unconstitutional steps, says Lt. Gen. Nadeem Anjum 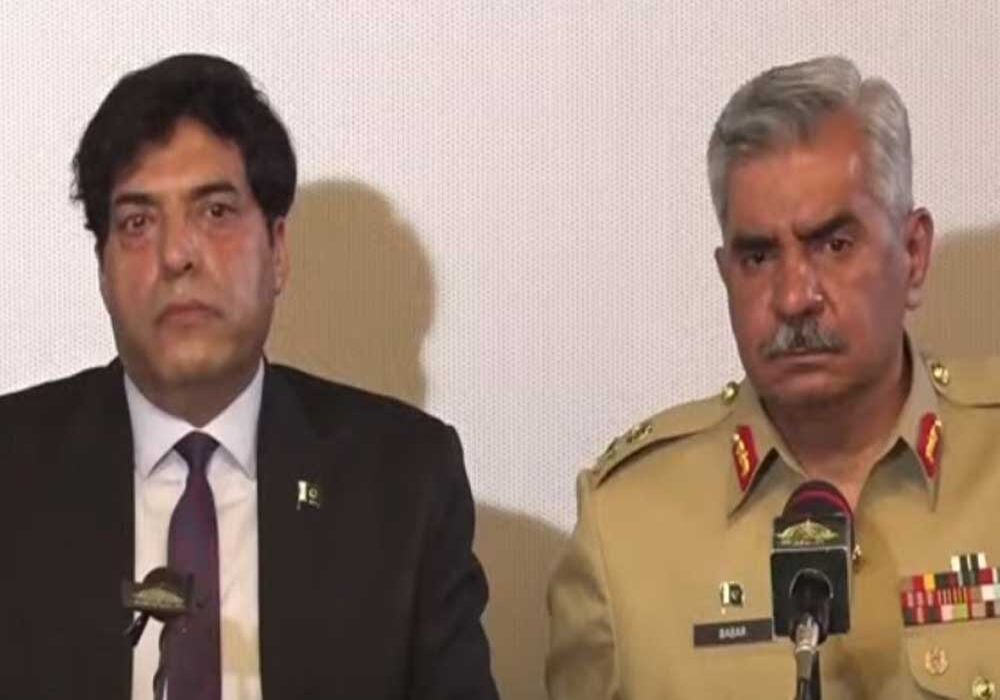 It was the first-ever media interaction of the agency’s head in the history of the country.

He said that he is in contact with his Kenyan counterpart and will facilitate the investigation of slain journalist Arshad Sharif. “Names as Mir Jafar and Mir Sadiq were given after denial of taking unconstitutional steps. Arshad Sharif didn’t have any life threat in Pakistan and he was in contact with me,” said Gen. Anjum.

Answering a question as if DG ISI had to come for a presser due to some extraordinary circumstances he said that agency has been happy that government and DG ISPR represent them whenever needed but there have been some things in the background and only for clear sharing he has come at the press conference.

Responding to a question about the long march he said that protest has been the right of everyone. There hasn’t been any issue with any peaceful long march as per law but nobody will be allowed to destabilize the country. He also said that if the government would call the army for controlling law and order that would be served by staying within the limits of the constitution.

DG ISI has said that he cannot stay quiet when a side has been telling constant lies. Answering questions during a press briefing he said that he would not respond unnecessarily but wherever it would be required he’ll respond for the dignity of the army and soldiers who have been giving lives for Pakistan and its people. He said that he will not keep quiet against false accusations.

He said that Army Chief could have spent the time quietly and with ease. He also said that COAS was offered for extension in his tenure in March in front of him. He further said that the army chief had decided to work for the betterment of prosperous Pakistan.

DG ISI said that the martyrs were ridiculed; further adding that if there has been any fear of truth due to lies then those lies should be stopped. He said that nobody should be blamed as Mir Jafar without evidence. He asked that if your Army Chief was a traitor then why there were praises for him in the past?

Answering the questions he also said that Arshad Sharif was a competent and credible journalist. He added that he had contact with Arshad even when he was in Pakistan and after going abroad as well. He also said that it was not right that you speak of something in the dark of night and pretend totally opposite in the light of day.

Lieutenant General Nadeem Anjum replying to a question stated that it was the right of every Pakistani to express their thought. He said that anyone could raise questions related to responsibility but negative propaganda should be avoided.

DG ISI answering another question also said that there were meetings between Army Chief and then the PM but the purpose was only the betterment of relations. He said that army is being blamed because of refusing to take illegal actions.

He said that it was collectively decided by the department to stay away from politics. He also said that there were fears of the spread of lies in society because a lie wasn’t being told as a lie and that was the reason he had decided to come to the press conference.

Answering a question about Arshad Sharif he said that Arshad Sharif had constant good relations with intelligence officials and if he was required to be stopped that was not even a problem. He questioned how could Arshad leave the country if the establishment didn’t want him to leave?

DG ISI said that the message delivered in a meeting with a political party was that things should be moved according to Pakistan’s interest.

He said that he was against the ideology of ‘Lifafa’ journalism as Pakistani journalists have been working with their lives in danger to bring the truth before people. Answering another question he said that he himself wasn’t important as an individual but his whole responsibility was towards safeguarding the country.

DG ISPR Lieutenant General Babar Iftikhar said that it was not the responsibility of the army to arrest anybody. He said that criticism is the right of everyone but when it goes beyond the blame game that creates problems because that doesn’t suit anybody.

DG ISPR further said that if anyone has any evidence of corruption in any of the recent past elections that should be brought forward but he showed a resolve that there was no corruption and nobody could bring any proof in that regard.

He said that the army never used the word neutral. It always said that it was apolitical but calling someone neutral and resembling an animal was inappropriate. He said that soldiers take oath on the Constitution and are bound to that. He also said that there have been committed mistakes in the past and they have been paying price for that for a long but all of that has been reversed.

Lieutenant General Babar Iftikhar said that everyone, whose name has been involved in the Arshad Sharif incident, should be investigated. He said that the institution decided to withdraw ISI and MI from investigation only because of staying out of further conspiracies and blame.

He said that everything should be investigated and anyone with any information should be contacted and thoroughly investigated. He also said that Pakistan has its strategic importance in the world; further answering a question also added that there has been an abundance of lies that people’s minds have been accepting those blames.

He also said that the names of Salman Iqbal, Khurram Ahmad and Waqar Ahmad have been showing for further investigations but without connecting the dots there cannot be logical results for Arshad Sharif case.

He said that the department had a very close relationship with Arshad Sharif and Arshad didn’t have any threat in Pakistan neither he had contacted him or any other officer regarding his life threat. Replying to a question about the statement of Interior Minister Rana Sanaullah, he restrained from answering.

Answering a question about any campaign from the media house he said that every action will have a reaction. He said that they are waiting for the result of the investigation of Sharif’s murder.