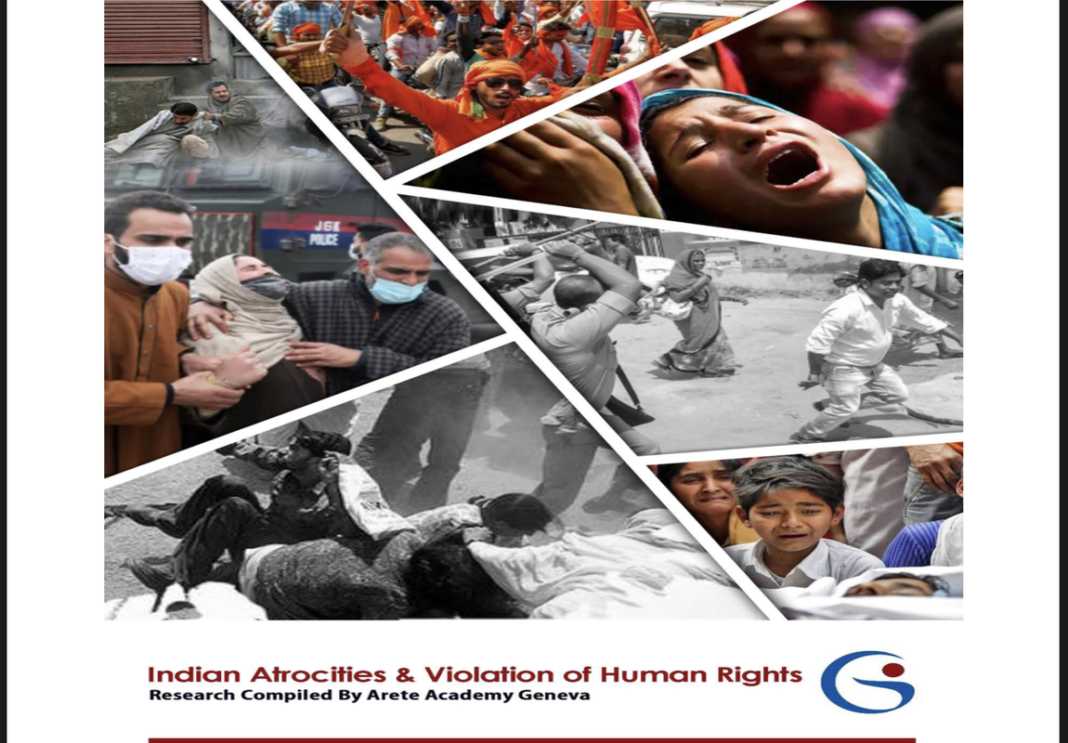 India has become a den of racism and Hindu nationalism. Indian behaviour on matters of minorities and religious rights has been called a threat to regional peace as the region has been quoted on a nuclear flashpoint.

A report on Indian atrocities and violations of Human Rights has been published by Arete Academy Geneva titled ‘Indian Atrocities & Violation of Human Rights’. The report has stated that the human rights record in India has deteriorated despite many communications with it.

The report on human rights atrocities in India has stated that minority communities have not been able to live peacefully in any way while India has been continuously disrespecting the recommendations of the European Union and the United Nations.

It has also been stated that civil society and media organizations have failed to pressurize India to implement various recommendations. India has also been called ‘reckless’ in implementing Human Rights standards in the report.

The report has said that Hinduism has been found a state-sponsored religion while other religions have found difficulty performing their fundamentalist religious rights. The same case has been cited for freedom of speech in India along with the separation of executive and judiciary and freedom of movement.

The promulgated legislations by the Indian government inclined towards specific geographic regions, targeted any specific population, negatively influenced any religion, sect or minority or controlled any specific issue have been called objectionable and questionable in the report.

It has also mentioned OHCHR reports on Indian Illegally Occupied Jammu and Kashmir (IIOJK) in which investigation was demanded overall. Deaths occurred in the context of security forces, reparations and rehabilitation of the injured in the context of security forces, cases of sexual violence that were allegedly perpetrated by the state and non-state actors, compliance of human rights standards into all Indian laws, amend Jammu and Kashmir Public Safety Act 1978 as per international human rights law and it has been advised to end restrictions on the movement of journalists in IIOJK.

It has also mentioned that thousands of human rights violations in India were reported. A few of the violations have been mentioned in the report with their references to different credible media coverage.

The report also mentioned the states in which violence against Christians was witnessed. The states with the highest number of cases have been reported. Uttar Pradesh has reported the highest followed by Madhya Pradesh, Tamil Nadu, Chhattisgarh, Maharashtra, Terengganu, Jharkhand, Bihar and Uttarakhand.

India has been demanded to immediately release all detained HRDs, journalists and representatives of different minorities on bail along with dropping charges against them and ensuring that they would be able to carry out their legitimate activities without any hindrances and fear.

It has been demanded to immediately end all acts of illegal harassment of HRDs, Dalits, Christians and civil society members and ensure the physical integrity and well-being of individuals from IIOJK, North East states and Punjab.

The report has demanded to invite UN special procedures and rapporteurs on the situation to conduct the country’s visit along with taking all possible measures to protect the right to freedom of association of minorities, scheduled casts in India and civil society organizations.

It has also been mentioned to end the use of laws inconsistent with human rights obligations and amend them into line with international human rights law and take certain urgent steps to strengthen the independence and effectiveness of NHRCI (National Human Rights Commission of India).

The report has demanded that well-reputed international media outlets should be allowed to visit IIOJK, North East states and Punjab to monitor and report media censorship and the situation of freedom of speech and religious freedom.

Arete Academy Geneva is a passionate education organization based in Geneva Switzerland.