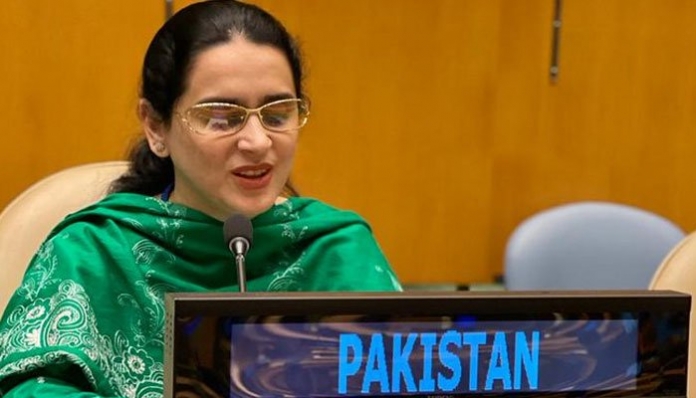 An Indian diplomat’s accusations that Pakistan was complicit in terrorist activities have been categorically refuted by a Pakistani diplomat.

On Friday, Pakistan cited instances of Indian support for terrorism and aggression against all of India’s neighbors as evidence that New Delhi is the “principal perpetrator, sponsor, financier, and abettor” of terrorism in South Asia.

Counselor at the Pakistan Mission to the UN, Saima Saleem, stated at the UN General Assembly that “The myth of terrorism against Pakistan, created and propagated by India, cannot and will not hide the stark reality that the people of Pakistan, the Indian Illegally Occupied Jammu and Kashmir (IIOJK) and its own minorities are victims of its state-sponsored terrorism.”

Saima was exercising her right of reply to address accusations made by Indian delegate Mijito Vinito that Pakistan supports cross-border terrorism and makes “untenable territorial claims against neighbors.”

Pakistan’s Prime Minister Shehbaz Sharif called attention to New Delhi’s serious human rights violations in occupied Kashmir and called for resolving the UN-recognized conflict in accordance with the Security Council’s resolutions during his speech to the 193-member assembly.

In response, the Indian delegate made the accusatory statement.

The Pakistani representative said in her speech that India has supported and engaged in acts of terrorism and aggression against all of its neighbors by funding terrorist organizations, as well as by destabilizing and encircling them to serve its strategic interests.

She accused India of extrajudicial killings during fabricated encounters, the forced disappearances of 15,000 young Kashmiri boys, the imprisonment of the entire Kashmiri leadership, the gerrymandering of electoral boundaries to reduce Muslim representation, the suppression of religious freedom, and a media and internet blackout.

She concluded by stating, “Like Martin Luther King, the Kashmiris also have a dream that they shall see the dawn of freedom one day.”