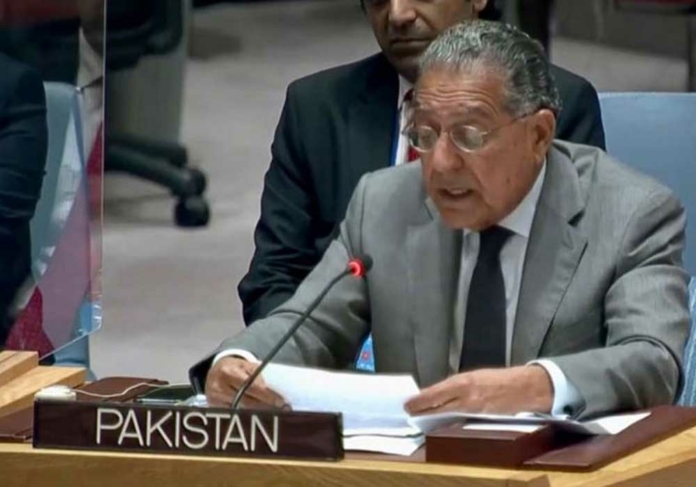 Pakistani Ambassador to the United Nations Munir Akram has said that the Indian occupation of Jammu and Kashmir was the worst manifestation of modern-day colonialism.

While addressing the Special Political and Decolonization Committee of the United Nations General Assembly, Akram said that the right of self-determination of the people of Jammu and Kashmir was explicitly recognized in UN Security Council resolution 47 and several subsequent resolutions, which prescribed that the final disposition of the State of Jammu & Kashmir should be decided by its people through a free and fair plebiscite held under UN auspices.

The ambassador said that a wall of silence has been imposed over IIOJK with a physical lockdown, a total information blackout, and censorship and surveillance to suppress the voice of the Kashmiri people. Journalists, lawyers, and human rights defenders are routinely incarcerated, beaten, humiliated, harassed, and even accused of “terrorism” for reporting on the human rights violations in IIOJK, he added.

According to Ambassador Munir Akram, all unilateral measures undertaken by India since 5 August 2019 are blatant violations of international law, including the relevant UN Security Council resolutions. Security Council resolution 122 (1957) provides that unilateral measures “to determine the future shape and affiliation of the entire State or any part thereof, would… not constitute a disposition of the State”.

Therefore, all the unilateral actions taken by India on and after 5 August 2019 are not only illegal but, ipso facto, null and void.

The Security Council and the Secretary-General must actively promote a peaceful settlement of the Jammu and Kashmir dispute in accordance with the UN Security Council resolutions and the wishes of the Kashmiri people by fully utilizing the modalities provided for in Chapter VI of the UN Charter, including Articles 33, 34 and 99 of the Charter, he stated.

Naeem Sabir Khan, at the outset, expressed his wish to highlight before the august committee the continued Indian colonization of Jammu and Kashmir.

He mentioned that year after year, India continues to present a factually incorrect position on this forum. Jammu and Kashmir is an ‘internationally recognized’ ‘disputed territory’ and not an integral part of India. Multiple resolutions of the United Nations Security Council define it as “disputed territory”. This is also printed on all official UN maps.

For long, India has tried to sell the false narrative branding the just struggle of the people of Jammu and Kashmir as terrorism. India rather needs to introspect to find the real reasons behind the mass resistance in the occupied territory, he continued.

Naeem Sabir also mentioned that India’s intransigence, and its mass atrocities against the innocent Kashmiris, subjecting them to the massacre, rape, blinding, and forced disappearances are the real reasons for the ‘indigenous’ freedom movement in Indian Occupied Jammu and Kashmir.

According to the diplomat, the list of Indian crimes in Kashmir is long and well-documented in the reports of the UN High Commissioner for Human Rights.