Inflationary pressures in Pakistan and the economy of Eidul Azha 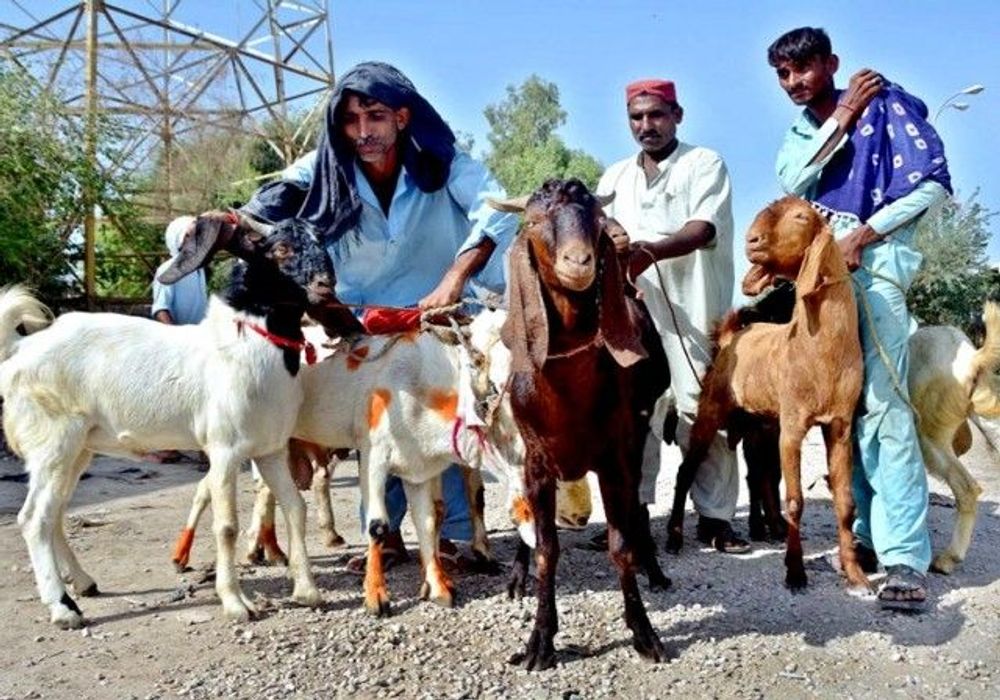 Eidul Azha or the Sacrificial Eid is the second most important religious festival in Islam, that is performed after preforming of Haj. This is a festive tradition where Muslims around the world and in Pakistan, who have savings and are not under debt, sacrifice an animal to Allah after Eid prayers and distribute one third of the meat to the poor, one third to their relatives, friends and neighbors and one third for themselves and their family members.

Almost a month before the festival, people from the moneyed classes in Pakistan start buying sheep, goats, bulls and camels and parade them around the streets in order to show their capacity to buy expensive animals.  There is a flurry of small entrepreneurs that sell fodder for these animals, or bells and garlands and other such trinkets that are adorned on the animals. Also, the sale of knives, BBQ implements and stoves picks up pace. More important is the sale of the animals themselves, which brings good profits to animal farmers that have bred these animals for years so that they can get a good price on Eid. Every year, there is a price competition for a couple of prime bulls that are sold at highest of prices; the price is so high that even the TV channels include these sales in their news programs. According to an animal vendor, “The price of a goat or a sheep weighing 10 to 15 kilograms is currently hovering between Rs35,000 to Rs50,000. The price of a 100-kilogram buffalo or cow is almost Rs130,000 to Rs150,000 while price of a 200-kilogram of buffalo or cow ranges from Rs300,000 to Rs340,000.” It was noted by TV channels that bulls are on sale in Karachi and in the Punjab, that are worth a crore of rupees. Money is also made by transporters during the Eid holidays when workers go back from large cities to their homes with whatever mode of transportation they can get space on. Poor people also travel on top of busses and trains.

It should be noted that in Christian countries, especially the advanced industrial countries of UK, EU, and the USA, during the festive season of Christmas, almost all stores have sales on their products so that they can enhance demand and make extra profits due to the festive buying frenzy. But in Pakistan, most of the sellers of different products increase their prices to make an additional buck during the festive occasions of Eid or Ramazan. The contradiction in approach to prices in the Christian world and in Pakistan’s religious festivities cannot be explained through rational economic theory, but needs a critical analysis by researchers and economists alike.

This year (July 2022) on the eve of Eid, the economic situation in Pakistan is such that the government has accepted that the economic growth rate has come down from 6% to 4%, while inflation has reached 20%, CPI at 21.3%, electricity and gas prices skyrocketing and the petrol prices in the country have reached Rs250 a liter, while transport prices increased by 62.2%, food prices by 26%. Pakistan’s trade deficit has reached US $48.66 billion and dollar-rupee parity is one US dollar touching Rs206.4. Bank rates have been increased to 15% by the SBP. There is reduced income, sickness, and death due to droughts and famine in 28 districts of Sindh, KP and Balochistan. Poverty in Pakistan has increased with middle classes sliding down to lower middle classes and people at lower strata shifting towards poverty line due to lack of employment and income enhancing opportunities and on top of it all, the ever-increasing inflationary pressures in the country.

The above economic and inflationary pressures in Pakistan have ensured that the festivities of Eid are being dampened down to the extent that there are families that are not able to buy new shoes and clothes for their children, let alone buy a sacrificial animal for their religious rites. On the other hand, it can also be seen that among the moneyed classes, the buying frenzy of sacrificial animals is going on, but at the same time many cattle farmers are going to return to their villages with their heard unsold. These cattle farmers feed their cattle and sheep all year round so that they can fetch good money with which they sustain their families’ livelihoods the rest of the year in wait for the next Eidul Azha. A large number of Pakistani families (almost 55%) live in villages and most of them are small farmers who do not bring their produce to the market, but sustain their own livelihood, however minimal, on these farms. It is these farmsteads that do not let majority of the rural population to starve or get below the official poverty line, but still they live at a certain level of poverty and do not contribute to the national GDP. On the other hand, the lifestyles of most of city dwellers is becoming precarious due to these inflationary and adverse economic conditions in the country.

How happy and festive this Eid is going to become this weekend, only depends upon the capacity of the resilient people of Pakistan to enjoy their festival, whether they sacrifice an animal this Eid, or receive some meat from those who do sacrifice their animals. It should be remembered that there are people, poorest of the poor, especially the brick kiln workers who can only eat meat when it is distributed to them on this Eid. Also, in rich households, families who do sacrifice animals, save the meat in their freezers or distribute the prime cuts to those they think are on the upper rungs of the ladder of success, and therefore the poor either get the uneatable portions or not at all, further dampening the spirit of Eidul Azha for the poor and the needy. At the same time, it can be noted that the flurry and festivities of the occasion are dampened by the rising fuel, electricity and food prices in the country that have forced people to choose between everyday necessities of life or the expenses on sacrificial animals. In the coming days, it would be clear whether this Eid’s economic activity has increased income levels or decreased income levels. Till such time agriculture and industry does not increase to levels that the circle of economic growth widens and the inflationary pressures from domestic and foreign sources do not decrease, the living standards of the lower middle strata and the poor will not become better and everyday life of an average Pakistani would not improve.