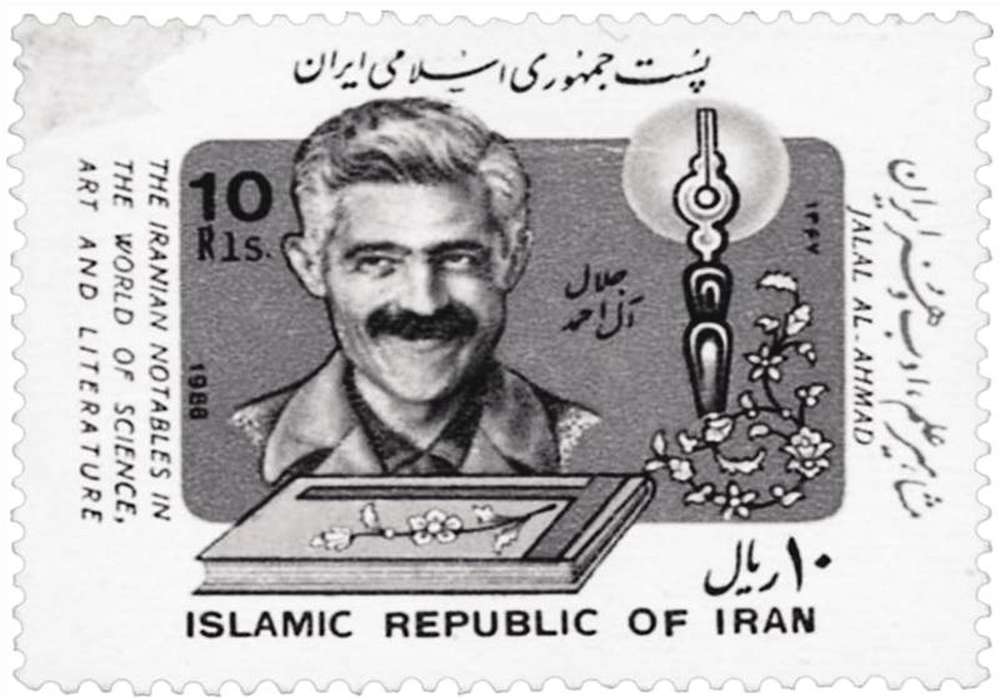 Iranâ€™s Voltaire, Jalal Al-e-Ahmad was born 98 years ago today. He was born in a clerical family, but soon abandoned clerical studies and adopted both a secular outlook and education. In fact, three of the most eminent intellectuals of the 20th century â€“ Al-e-Ahmad, alongwith Ahmad Kasravi and Ali Shariati â€“ belonged to clerical families but later rebelled against organized religion.

Al-e-Ahmadâ€™s life mirrored the tumultuous events of his native country, which was in the grip of the dictatorial Pahlavi monarchy, one of the strongest allies of the United States in the Middle East. Al-e-Ahmad married Simin Daneshvar, Iranâ€™s pioneering female writer and established himself as arguably the pre-eminent Iranian writer of his time, with his notable contributions to Iranian literature, anthropology, ethnography, social sciences and translation. In fact, given that he started and then abandoned doctorate studies in Iranian literature, it is remarkable that he reached such a prominent position in Iranian letters without a formal training.

Yet, he was no ivory-tower intellectual. In his youth, he joined the Tudeh Party, Iranâ€™s communist party which was at the forefront of democratic resistance against the Shah of Iran in the 20th century. He rapidly rose through the ranks of the party, but left it after disagreeing with its proximity to the Soviet Union. His short-stories are realist, embellished with the stories of the travails of ordinary Iranian people with whom he liaised on his long ethnographic journeys to the far-corners of Iran.

In later life, he also found time to visit what he considered holy places â€“ Mecca, Moscow, Washington and Tel Aviv â€“ Â and these visits yielded the most interesting travelogues. Despite these varied contributions, Al-e-Ahmadâ€™s enduring legacy is as the author of the anti-colonial classic Gharbzadegi, which has been variously translated as â€˜Occidentosisâ€™, â€˜West-struck-nessâ€™ or â€˜Westoxificationâ€™. This book, published in 1962, was a searing polemic on the undemocratic conditions in Iran at that time, as well as a cultural critique of Westernization in the country under the Shahâ€™s patronage.

It became his most influential work, and placed him in the pantheon of such seminal anticolonial and anti-imperialist figures as Frantz Fanon, AimÃ© CÃ©saire, Che Guevara, Malcolm X and Walter Rodney. Al-e-Ahmad however was not just concerned with criticism because he wanted to search for a distinctly authentic Iranian identity amid the cacophony of contending visions, which was also cosmopolitan. This is in fact the argument of Hamid Dabashiâ€™s new, certainly definitive intellectual biography of Al-e-Ahmad titled The Last Muslim Intellectual, where the former places the latter in the company of major thinkers of his time. While one can disagree with Dabashi whether Al-e-Ahmad was in fact the last Muslim intellectual or not, what is not in doubt is that were Al-e-Ahmad alive, he would have opposed tooth and nail the direction the Iranian Revolution has taken since 1979. It is a pity that Al-e-Ahmadâ€™s works have not been translated into English and that he is not better-known than his contemporaries like Shariati and Abdolkarim Soroush. One hopes that with the publication of Dabashiâ€™s timely biography of the man, this lacuna in the proper acknowledgement and recognition of one of the seminal anticolonial thinkers of the 20th century will be rectified as we move towards celebrating his birth centenary in a couple of yearsâ€™ time, in 2023.