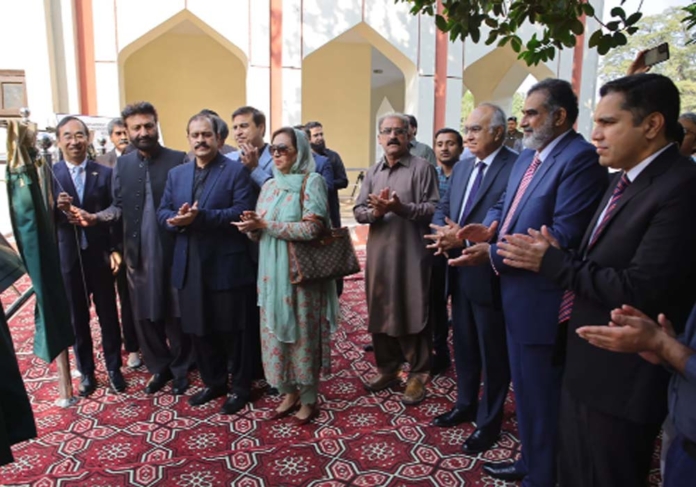 The foundation stone of the mega water treatment plant project costing Rs7.25 billion, being executed in collaboration with WASA and JICA, has been laid.

The project of replacement of pumping machinery at a cost of Rs1 billion at the Inline Booster Pump Station and Terminal Reservoir was inaugurated. In this regard, a special ceremony was held at Circuit House. Ambassador of Japan to Pakistan Wada and Provincial Minister for Mines & Minerals Ch. Latif Nazar were chief guest while Commissioner Muhammad Shahid Niaz, Deputy Commissioner Imran Hamid Sheikh, Members of Provincial Assembly Shakeel Shahid, Habqooq Gill, Firdous Rai, Vice Chairman WASA Sheikh Shahid Javed, Director General FDA Dr. Muhammad Zahid Ikram, Managing Director WASA Jabbar Anwar were also present. Speaking at the opening ceremony, Ambassador of Japan Mr. Wada said that JICA’s project of providing clean drinking water to the citizens of Faisalabad is welcome and the completion of this project will meet the needs of the citizens of clean drinking water. He said that JICA has fully cooperated with WASA Faisalabad before and this will continue in the future as well. Provincial Minister for Minerals Chaudhry Latif Nazar said that today is great news for the citizens of Faisalabad to which JICA has contributed 7 billion rupees. The foundation stone for the construction of the drinking water plant has been laid and the completion of this project will provide drinking water to the citizens. He said that with the efforts of MD WASA and his team the construction of the project started. It has been because the city’s underground water is no longer potable and there was a need to increase the amount of drinking water here, which is starting today with the construction of the JICA project.

Member of Punjab Assembly Shakeel Shahid said that he is grateful to the Japanese government and JICA for the initiation of the water supply plant project that they have laid the foundation stone today while planning this project keeping in mind the needs of the citizens because of poor drinking water. Citizens were suffering from various diseases due to water, but now the completion of this plant project will make it possible to supply water to the citizens according to the rules of hygiene. Divisional Commissioner Muhammad Shahid Niaz said that the supply of clean drinking water has become an important need at this time for which JICA’s water supply plant project is welcome along with this, the change of the pumping machinery of the first project will also improve the water supply and increase the pressure.

He clarified that the master plan of Faisalabad is in the final stages of completion. He said that three years ago, JICA had set up a drinking water project and today its machinery has been changed, which has further increased the efficiency of this JICA project, as well as the new water supply project worth 7 billion rupees. An additional quantity of drinking water will be provided to the citizens for which the Punjab Government is grateful to JICA.