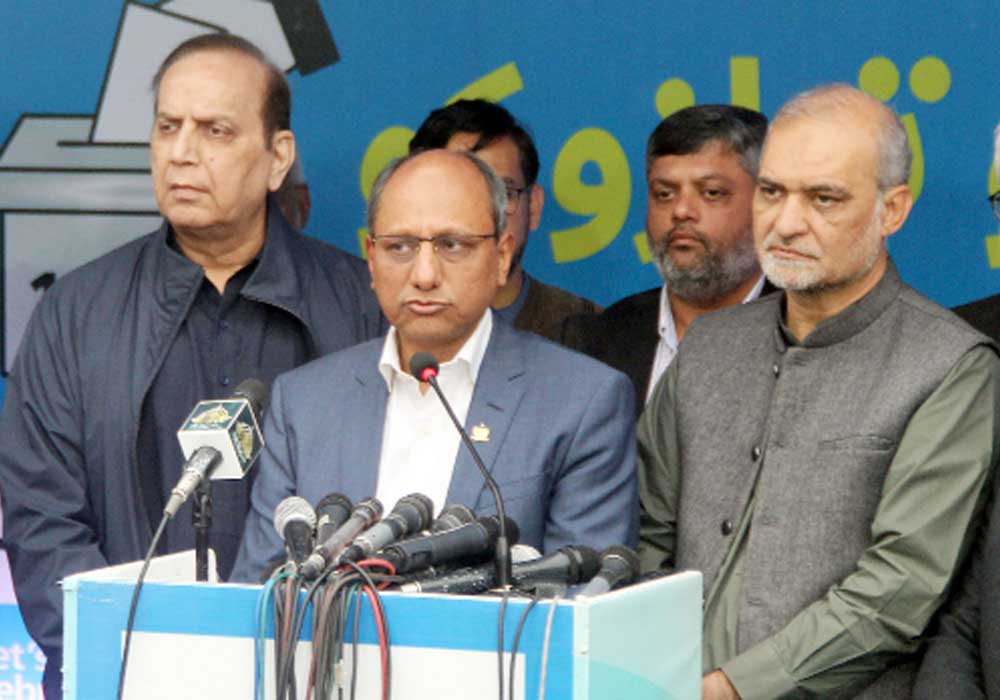 Jamaat-i-Islami’s (JI) Hafiz Naeemur Rehman said on Thursday that he was hopeful that the PPP, the ruling party in Sindh, would address the former’s reservations about the recently held local government elections.

He made the remarks after meeting with a PPP delegation led by Saeed Ghani, who is also the provincial information minister. The meeting came days after the JI chief levelled serious allegation of rigging against the PPP, which led Sindh Chief Minister Murad Ali Shah to contact him over the phone and assure him that legitimate concerns regarding the polls would be addressed.

It is pertinent to mention that the Election Commission of Pakistan (ECP) has taken notice of alleged irregularities in six union councils (UCs) amid accusations by JI emir Sirajul Haq and PTI chairman Imran Khan that the PPP used the Sindh government’s resources to “manipulate the results”. At the outset of today’s press conference in Karachi, Rehman said that recounting of votes was underway in some places, due to which problems were arising. “We have forwarded our complaints regarding what happened on the day of the polls to the election commission. In some places, the presiding officer along with the ballot box were picked up.”

He said that the main issue the party had was with obtaining the Form 11 and 12 and the subsequent “changing of the results”. “We contacted the election commission and also the PPP to resolve this matter.” He noted that the ECP would hear the party’s reservations regarding some UCs on January 23. “But UCs which are facing recounting issues […] recounting is a legal process but if illegal moves are made during a legal process, then it makes the whole exercise fake [sic] which has happened in this case.”

He further said that the party had informed the Sindh government and the PPP of its reservations regarding the LG polls. “I hope that Saeed Ghani bhai and his whole team will look at the issue and things will be resolved. We will wait and if things improve then there will be more talks.” For his part, Ghani congratulated the JI for securing a “good number” of seats during the LG polls. He said that the PPP had contacted the party in an effort to hear their reservations and complaints.

“We have been saying for the past few days, since the results started coming in, that we want PPP and JI to work together in the city’s local bodies. “This is a good opportunity for this city, the people and the local bodies that two mature political parties work together to improve the situation.” He accepted that the JI had “grievances and complaints” regarding the LG polls. “As you know, when elections take place, the entire exercise comes under the election commission and its laws.

“So a lot of things do not fall under the government. Despite that, we assured them that if the Sindh government can play a part in addressing the JI’s reservations, then it will do so.” He noted that the JI had taken the legal route to address their grievances, saying that this was their “right”. “We will not become an obstacle in this regard or oppose it in anyway.” He further said that electoral watchdog had taken notice of the six UCs which the JI had expressed reservations about. “The district returning officer and the returning officer have been stopped from working further. There is no activity being carried out there.”

He said that the Sindh government would accept whatever decision the ECP made and would move forward according to the law. He said that the two parties would settle the matter and would continue to talk so that they could reach a “better end result”. Responding to a question, Ghani expressed the hope that JI would also “surely” wish to work with the PPP in the near future. “When both parties have to work together, then tensions between their workers are not welcome under any circumstances.”