Journalism fraternity in uproar after attack on Ambreen Fatima

Journalist, who is Ahmed Noorani’s wife, had her car attacked with iron object by unidentified assailant 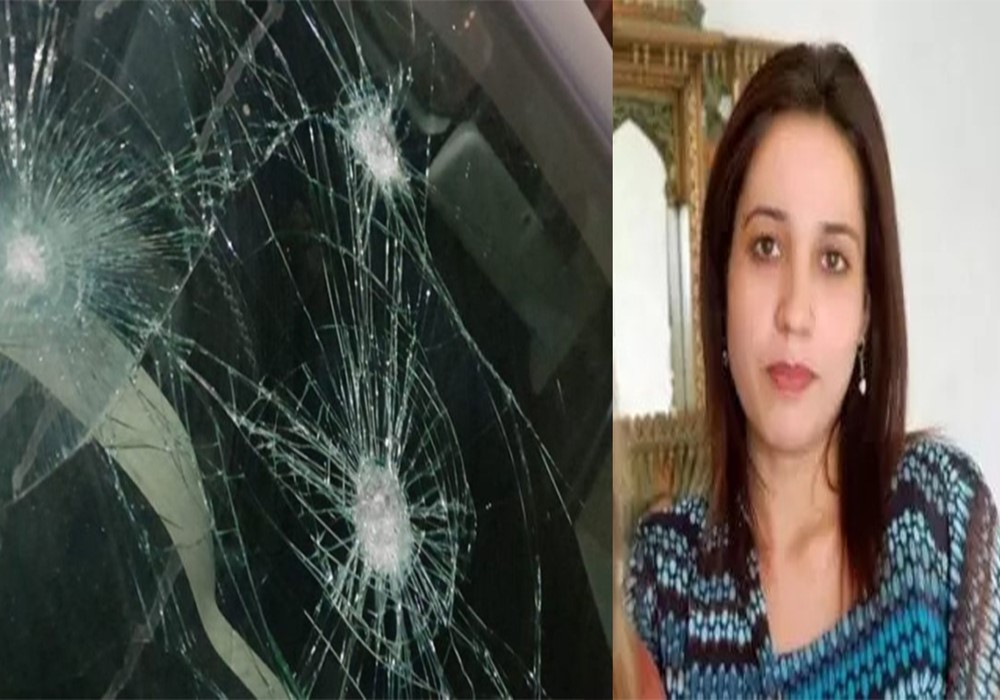 Great hue and cry and condemnation has ensued after an unidentified assailant attacked journalist Ambreen Fatima’s car when she left her house with her children on Thursday.

According to the Punjab Police, Fatima’s car was attacked near Ghaziabad Police Station’s vicinity in Lahore last night. The police noted that an unidentified person charged at Fatima’s car with an iron object and smashed the windscreen. Authorities added that Fatima had driven to the police station herself, they did not receive any emergency call. An FIR was registered on Friday against an unidentified person and CCTV cameras were being used to investigate the incident.

Journalist Ambreen Fatima is the wife of Ahmed Noorani, an investigative journalist who revealed the audio clip wherein it was alleged that former Supreme Court chief justice (SCCJ) was heard telling an unknown person that former prime minister Nawaz Sharif had to be declared guilty in the corruption case against him. The voice could seemingly be heard saying that certain entities wanted the then in opposition Pakistan Tehreek-e-Insafleader Imran Khan to come to power.

The attack on Fatima has garnered horrified criticism from all quarters, especially journalists.

Journalist Gharidah Farooqi, while not naming the person, said that ‘he’ had proven Noorani’s report was true by orchestrating an attack on his wife. Farooqi said that if the audio file was fabricated, then proper investigation would have been done instead of attacking the journalist’s family.

Veteran journalist Asma Shirazi said that the ‘fascist’ style tactic would not keep journalists from reporting the truth.

Journalist Hamza Azhar Salar, while detailing the incident, said that it reflected ‘cowardice and guilt’. He added that Noorani too was subjected to assault previously. In a separate tweet, he said that ‘even war had rules’ and those not actively fighting were not attacked, but Fatima’s incident demonstrated that a limit was crossed.

Journalist @Ahmad_Noorani's wife Ambreen Fatima's car was attacked by two unidentified men and her car's windscreen was broken. This comes days after Noorani's report on Saqib Nisar. Noorani has previously been a victim of assault.

Such tactics reflect cowardice and guilt.

Another journalist, Usman A. Khan Tahir added that the ‘disgusting and shameful’ assault ironically took place on the International Day for the Elimination of Violence against Women, which has historically been celebrated on November 25.

On Int'l Day for the Elimination of Violence against Women a female journalist, wife of Ahmad Noorani, gets attacked in Lahore by "unknown" persons. Disgusting and shameful.https://t.co/Opj1EFldch

Others like Mohammad Jibran Nasir also felt that the attack demonstrated a scramble to suppress the truth. Nasir said that typically, legal action like suo-motos and joint investigation teams were deployed to uncover the facts, but the attack just showed a ‘denial’ of truth.

In the past we have witnessed that when there is a will to dig out the truth or at the very least acknowledge but manipulate it there are suo motos, contempt notices, commissions, inquiries & JITs. An attack simply means the need is to deny and suppress the truth. #AmbreenFatima

Actor Shafaat Ali also condemned the attack and called it a ‘low blow’. He was ‘disgusted’ but said he was thankful that Fatima and her children were safe.

Attack on Ambreen Fatima is a low blow. I am absolutely disgusted to know the details of the attack. Thankfully she and her child are safe.

While several journalists have connected the incident to Noorani’s Fact Focus report, the news breaker himself has said that it was ‘incorrect’ to connect the attack in Lahore to his work. Noorani maintained that an investigation by a ‘high powered judicial commission’ should be conducted to probe the allegations against Nisar.