Journalists protest against torture on colleague 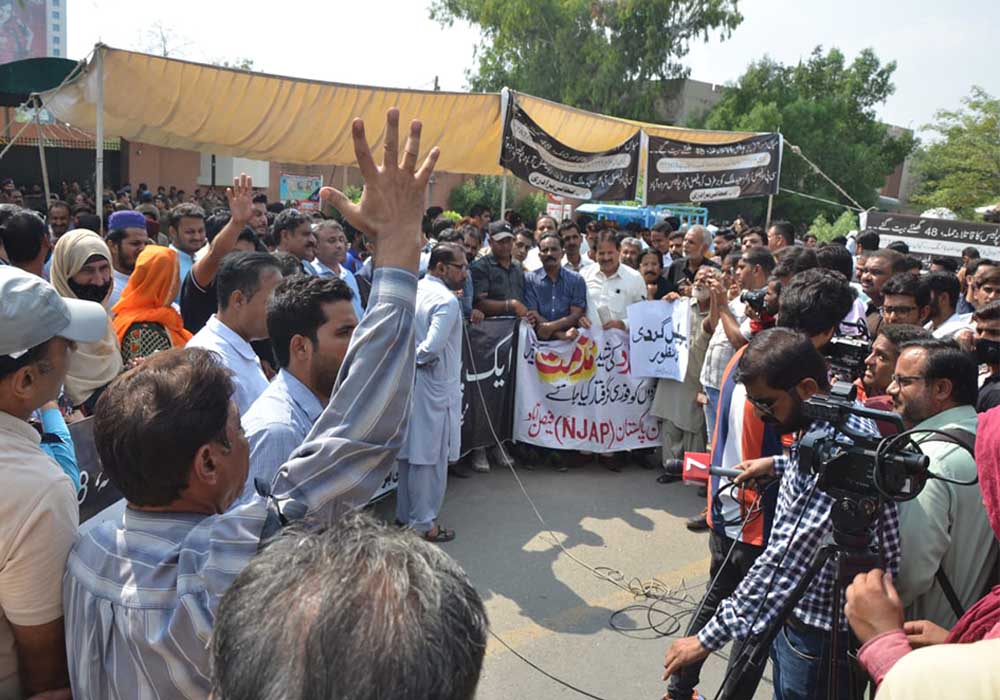 The journalists’ community protested and staged a sit-in in front of the Regional Police Officer Complex against the murderous attack and torture of senior journalists and Bureau Chief of national news.

Although the case was registered, the police did not arrest any of the accused, while the accused in the torture case are openly confessing their crime and uploading videos on Tik Tok and other social media, but the police authorities have remained silent. On September 22, a video went viral on social media in which senior journalist and Bureau Chief of 7 News Mian Munawar Iqbal and SHO Rail Bazar Police Station Qalb Abbas had a bitter conversation. After which an explanatory video was also released by Mian Munawar Iqbal In which he said that this video was from 4 months ago and after this incident mutual friends reconciled him and SHO Qalb Abbas. Now after four months, some miscreants want to fight again between the media and the police.

A day after the video of the bitter exchange between Bureau Chief 7 News Mian Munawar Iqbal and SHO Qalb Abbas went viral, unidentified gunmen stopped the car of local senior journalist Mian Munawar Iqbal on Satyana Road and opened fire on him. While Mian Munawar was brutally tortured with sticks, punches and kicks. His car was completely destroyed; while threatening serious consequences including killing, demanded 50 million rupees as extortion. Mian Munawar Iqbal was shifted to the hospital in an injured condition after receiving the information about the incident.

An FIR has been registered for the incident of torture on senior journalist Mian Munawar Iqbal, but the police have not yet arrested any of the accused. While yesterday, the accused involved in the torture case also admitted that he is a close relative of SHO Qalb Abbas and he tortured Mian Munawar Iqbal and taught him a lesson that his posterity will remember, but despite this, the silence of the police remains a question mark.

Expressing solidarity with Bureau Chief 7 News Mian Munawar Iqbal in the protest demonstration and sit-in, against the incident that happened to Mian Munawaror Iqbal and the negligence, biased attitude and involvement of police officers in this matter were strongly condemned. Officials of journalistic organizations demanded the Punjab government to remove CPO Faisalabad Umar Saeed Malik from his post, While the provisions of spreading terror, and kidnapping should be included in the FIR. Along with this, a campaign will be launched against the biased role of the police on social media; similarly, the option of boycotting police news and taking the protest to the national level will also be used. On this occasion, a joint action committee was formed which will decide the course of action on this issue.