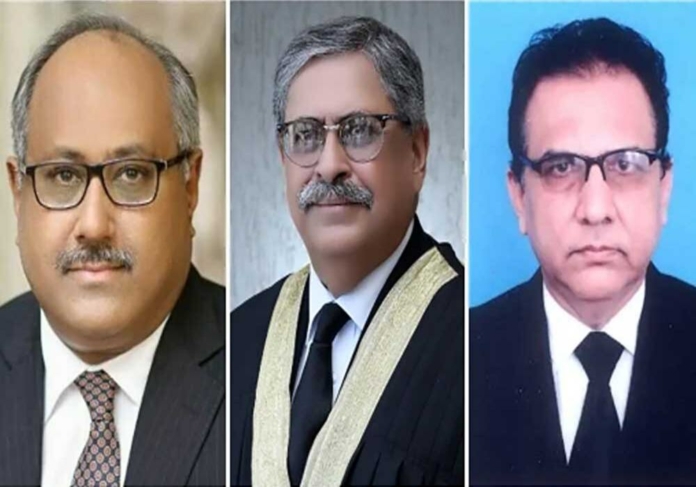 Recommendation to appoint the Islamabad High Court (IHC) Chief Justice Athar Minallah was also made, as part of this major development, alongside two more judges – Justice Shahid Waheed of the Lahore High Court and Justice Hasan Azhar Rizvi of the Sindh High Court (SHC). During JCP’s meeting, presided by the Chief Justice of Pakistan (CJP) Umar Ata Bandial, the commission deliberated over the elevation of four judges to the top court.

The apex court, at present, is short of five judges out of its total strength of 17. Following the JCP’s detailed discussion, members agreed to appoint the three aforementioned judges, well-places sources said. Justice Minallah’s name was proposed unanimously, while Justice Rizvi and Justice Waheed were recommended by a 5-4 ratio, the sources added. However, JCP deferred the proposal to elevate Shafi Siddiqui as participants of the meeting could not agree upon his name, sources mentioned.

Sources privy to the matter added that Justice Qazi Faez Isa, Justice Sardar Tariq Masood, Mansoor Ali Shah, and Pakistan Bar Council (PBC) representative Akhtar Hussain opposed the elevation of Justice Shahid Waheed and Hasan Azhar Rizvi. The recommendations of the JCP will be sent to the Parliamentary Committee on Appointment of Judges in Superior Courts for final approval. In a meeting held on July 28, the JCP rejected the proposal to elevate Hasan Azhar Rizvi, Shahid Waheed, and Shafi Siddiqui to the SC.

In July 2022, the JCP rejected Chief Justice Bandial’s nominated judges of high courts for their appointment to the Supreme Court. CJP Bandial presided over the judicial commission’s session, where the names of a total of five judges, two from the SHC and three from the Lahore High Court (LHC), were considered. The chief justice, Justice Aijazul Ahsan, and Justice Sajjad Ali Shah voted in favour of the nominees, while Justice (retd) Sarmad Jalal Usmani voted in favour of three judges from the LHC and voted against the SHC nominees, sources said.