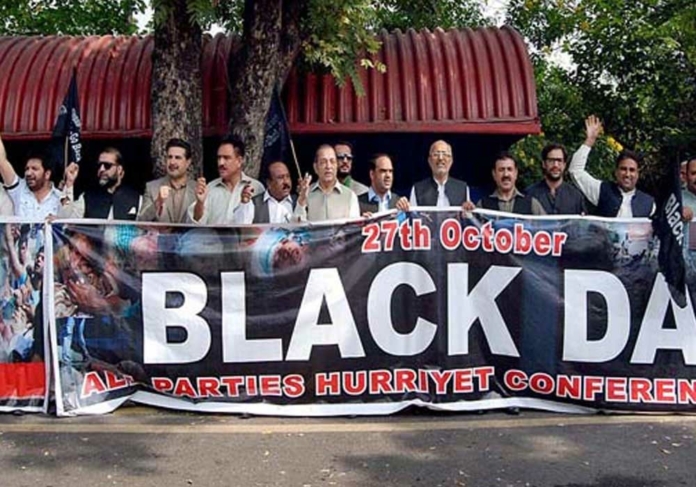 The 27th of October will be observed as Black Day by Kashmiris on both sides of the border to let the international community know that India has unlawfully seized their land against their will.

On Thursday, the people of Indian Illegally Occupied Jammu and Kashmir, which India unlawfully seized, will observe the day with a total closure and curfew.

Protest marches, rallies, and seminars will be held in Azad Jammu and Kashmir, Pakistan, and other countries to denounce the Indian Army’s invasion of the region on October 27, 1947, as well as the fascist Indian government led by Narendra Modi’s revocation of the special status of occupied Kashmir on August 5, 2019.

Prime Minister Shehbaz Sharif on this occasion said that India had illegally brought its troops to IIOJK on October 27, while the situation in the region worsened due to the unilateral action of India on August 5, 2019.

The Prime Minister demanded that the international community should play its role on the issue of IIOJK; Pakistan will always stand with the people of Kashmir.

Foreign Minister Bilawal Bhutto said that October 27 is the darkest day in history.

The All Parties Hurriyat Conference issued a call for the observance of the strike and Black Day.

In a statement released, the APHC urged the people of Kashmir to show the world that they will not stop fighting for the freedom of IIOJK from Indian rule.

It asked the international world to end the silence about the atrocities committed by India in IIOJK and to take concrete action to compel New Delhi to grant the Kashmiris their right to self-determination in accordance with UN Security Council resolutions.

Indian soldiers invaded Kashmir on October 27, 1947, and unlawfully seized it against the will of the Kashmiri people, thus violating the letter and the spirit of the partition plan.