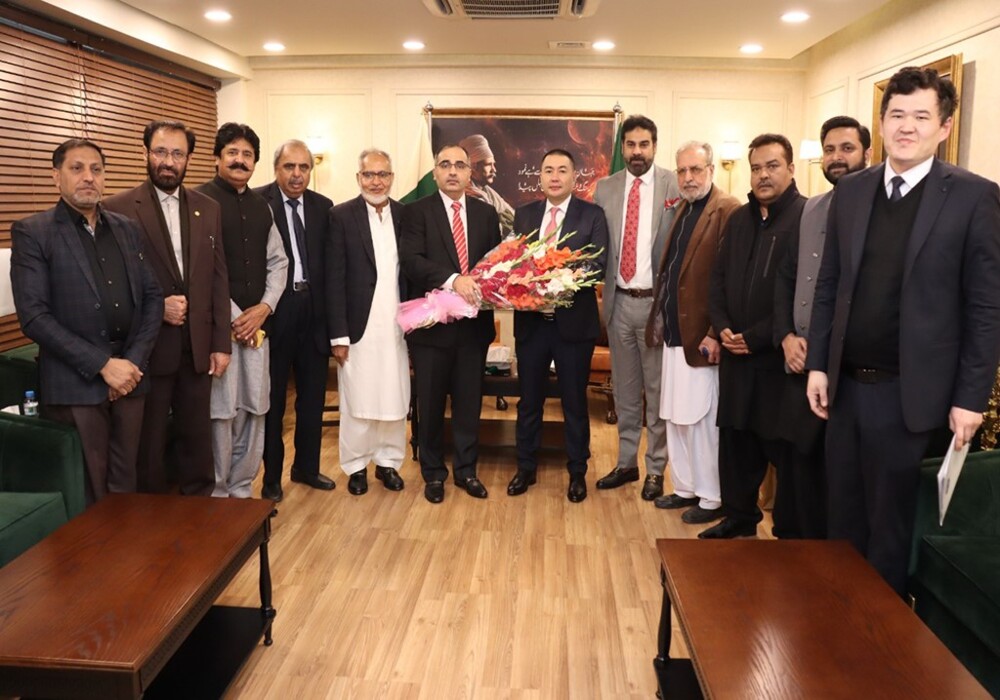 The broad experience of LCCI in business will help enhance the business ties between Pakistan and Kyrgyzstan.

Both countries have historical, cultural and economic relations. Due to the international circumstances, most notably the conflict between Ukraine and Russia, which calls for improved economic ties between regional nations as the current state of the world economy is challenging. The Ambassador of Kyrgyzstan, Ulanbek Totuiaev at a meeting at LCCI expressed these views. LCCI President Kashif Anwar welcomed the ambassador to LCCI while LCCI EC members were also present on the occasion.

The Ambassador said Kyrgyzstan offers great potential for economic cooperation in all fields in a more effective and meaningful way. To enhance trade, he suggested, trade activities like trade fares and exhibitions in both countries can help. He said a Kyrgyzstan-Pakistan Trade house was to be inaugurated today (December 23) and invited the LCCI office-bearers to participate in the opening ceremony. He said Kyrgyzstan companies are interested in the Pharmaceutical and Agriculture sectors of Pakistan. He said the textile products of Pakistan are more expensive than China and Turkey due to their quality.

He was of the view that Kyrgyzstan offers great opportunities to invest in more than 30 investment projects in this regard the Kyrgyzstan-Pakistan Business Forum can help in a very positive way. He stressed the need for better banking mechanisms between the two counties to provide the free movement of capital in both countries. He said that a railway line has been proposed between China Kyrgyzstan and Uzbekistan which can be expanded from Mazar-e-Sharif in Afghanistan to Peshawar in Pakistan.

LCCI President Kashif Anwar said that LCCI would certainly like to explore ways to increase the trade and economic ties between the two countries. He said Pakistan and Kyrgyzstan are members of important international organizations like OIC, SCO, ECO, etc., while both countries have been enjoying friendly as well cordial relations since 1992. We share religious and cultural ties with strong bonding of brotherhood. I appreciate that you keep a good liaison with LCCI in order to transform these ties into long-term business and economic relations.

President LCCI further said that bilateral trade hardly reflects the mutual relations between Pakistan and Kyrgyzstan. One of the reasons is that there are very few items being traded between the two countries for the last many years, he said adding Pakistan’s imports from Kyrgyzstan are almost negligible, however, some pharmaceuticals and sports goods are being exported to Kyrgyzstan. Kashif Anwar informed that trade figures issued by the State Bank of Pakistan, Pakistan’s total exports to Kyrgyzstan were around two million dollars in 2020-21 which inched up to nearly 2.6 million dollars in 2021-22. We are keen to get a better share of the total imports of Kyrgyzstan which were around 5.6 billion dollars last year.

Meanwhile, the Consul General of Iran, Mohamad Raza Nazeri in his farewell meeting said that Punjab is the cultural, economic, and political hub of Pakistan. Both Punjab and Dr. Allama Muhammad Iqbal, whose philosophy and ideas about the east served as the foundation for Iran’s Islamic Revolution, are dear to the hearts of the Iranian people. President of the Lahore Chamber of Commerce & Industry Kashif Anwar congratulated him for the successful completion of his four-year tenure and wished him luck in his future endeavors in Iran’s foreign Services. Reza Nazeri further said that 60 percent of the total visas in Iran were given by the Consulate General in Lahore.

He said Iran and Pakistan enjoy very cordial relations but the need for further improvement is still there. He hoped that the LCCI President will lead a business delegation to Iran as many small, medium and full-scale business delegations have already visited Iran and met high business people in Iran. LCCI President Kashif Anwar said Iranian Council General has always been showing great respect to LCCI kept the doors of the office of the Iranian Consulate open for the members of LCCI.