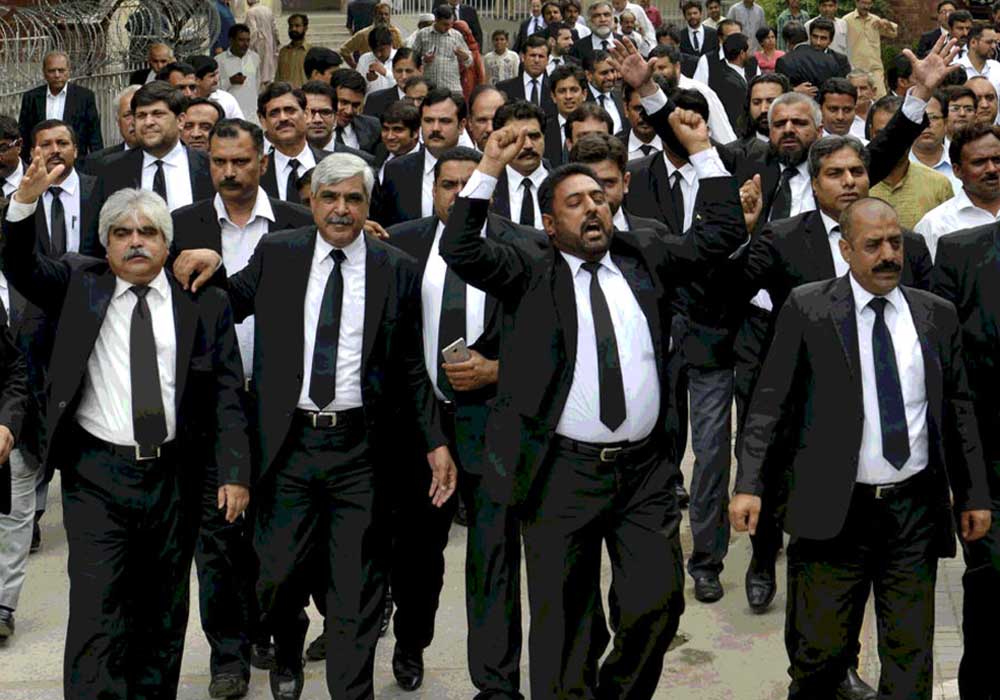 Lahore High Court Bar Association (LHCBA) has given a strike call for today (Monday) to protest against the conviction of a lawyer by LHC senior judge Justice Malik Shahzad Ahmed Khan over the charge of not wearing a gown while appearing in his court.

The LHCBA’s strike call comes two days after Punjab Bar Council (PBC) gave a protest call against the conviction of the lawyer. The provincial bar council had also said, “The court Justice Malik Shahzad Ahmed Khan illegal and unlawfully made Advocate Rana Muhammad Asif, also the member of PbBC, to sit in the courtroom and verbally announced conviction of three months jail to him without giving an opportunity to him to defend himself”.

It said, “The decision is against Article 10-A of the Constitution and Punjab Bar Council strongly condemns it.” The council demanded that the conviction be reversed immediately and asked the lawyers to go on strike. The council said that the lawyers should boycott the courts as a protest, adding that the next plan would be made in the general house meeting.

The development has caused a gap between the bar and bench, which both sides claim is important for the judicial system. It started on Friday when Advocate Rana Muhammad Asif, also a member of the PbBC, wore his black gown, an essential part of the uniform of judges and lawyers during winter, inside the courtroom when Justice Malik Shahzad Ahmad Khan told the lawyer that he should have worn the gown before entering the courtroom. On it, the lawyer felt offended and he responded to the judge in harsh words. At this, the judge ordered his security staff to take the lawyer into custody and also issued him a show-cause notice under a contempt charge.

The lawyer tendered an unconditional apology but the judge rejected it, asking him to submit a written reply to the show-cause notice and put off further hearing. The lawyer was made to sit in the court for hours until several elected representatives of the bar and lawyers reached the court and took him out. The lawyers also expelled the police personnel from the court and chanted slogans against the court’s action.

Justice Khan later, announced a verdict and sentenced the lawyer to three months in jail for the contempt of court. Chief Justice Muhammad Ameer Bhatti constituted a division bench comprising Justice Chaudhry Muhammad Iqbal and Justice Muzamil Akhtar Shabbir to hear an appeal of the lawyer against the single-judge decision. The judges, however, recused themselves from the matter and sent the case file back to the chief justice, asking him to fix it before any other appropriate bench on Friday.