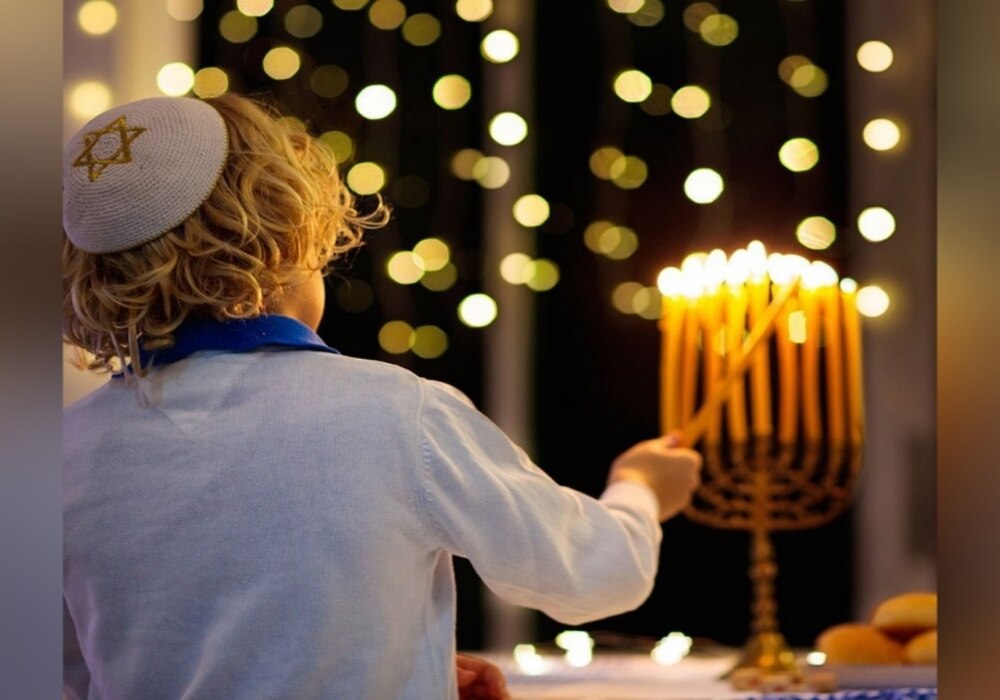 With lighting of traditional lampstands, special prayers, food, music, and a family and community focused get together, Jews in Pakistan and elsewhere are ready to start the eight-night long Hanukkah – a most visible ‘Festival of Lights’ celebrated on the 25th day of the ninth month of the Jewish calendar each year, which would begin on the night of November 28 till the evening of December 6.

“Hanukkah today responds to Jews’ desire to see their history as significant, as reflecting value of religious freedom that Jews share with all others. With its bright decorations, songs, and celebrations, Hanukkah fulfills the community’s need to reengage disaffected Jews and to keep their children excited about Judaism,” Dianne Ashton, a Jewish scholar, wrote in his book – Hanukkah in America.

Each night as the sun sets, one candle is lit from right to left. Although, there is no correct order to place and light the candles. On the lampstand, each candle represents one of the eight days in the festival. The ninth candle is used to light the others. It is pertinent to mention here that the prayers accompany each night’s candle lighting. Once the lampstand is lit, it is often placed in a door or window that faces the street to share the light with neighbours.

Pakistan has a small Jewish population, settled in Karachi, Lahore and Islamabad. During the latest voter list, official figures issued by the Election Commission of Pakistan (ECP) showed around 900 Jews enrolled.

Israeli journalist Liel Leibovitz has claimed that the registered number of Jewish families in Pakistan has been falsified by the government’s database. Many Jews who migrated from Pakistan have not updated their status in the National Database and Registration Authority’s (NADRA’s) records.

In his newspaper column in 2015, author and research associate of London’s Wolfson College, Dr Abdul Majid Sheikh revealed the presence of six Jewish families that were settled inside Lahore’s Walled City.

“They are two ‘white Baghdadi Jews’ and four ‘black’ Cochin Jews,” he wrote while pointing out the total number of Lahore’s Jews as 32 humans. Besides migration from Pakistan, Jewish families masked their identity ‘intentionally’ as a security measure.

“My visit to six such families inside the Walled City was purely coincidental. I was searching for the river boats’ traders of Khizri Gate, when an old trader pointed out to Jew river traders. He said their poor off-shoots still live in a lane inside the city. I took exact location and walked there,” he wrote. “As I entered the street, a very narrow one at that, the second house had a six-star mark on the doorway, with a sign in a Hebrew language on top,” wrote Dr Sheikh.

“A knock at the door had an old woman in a cotton sari emerge. When I told her I was a journalist she froze. But then, she was very welcoming and as we conversed her son came home from his small shop inside ShahAlami (Shah Alam) Bazaar. He was wearing a small head cap. It was a typical Jewish compromise. He was worried, but on my assurance, he told me a most delightful story of their history in Lahore,” he wrote.

“As a journalist who walks the lanes of the Walled City, I do know of two families who are Jews, but then they are very poor and keep to themselves and celebrate every local festival with gusto,” Dr Sheikh wrote in another column in 2018.

“We see minority groups tend to shrink in ‘relatively’ intolerant societies, invariably tending to move towards where they are together in sufficiently ‘safe’ numbers,” he wrote.

Center for Peace & Secular Studies (CPSS) Chairperson Saeeda Diep has said that the government has an obligation to implement policies that ensure identities of all humans are respected.

“It is unacceptable for people to face discrimination for their identities or beliefs,” she said, and asked the government to ensure religious freedom for everyone. “We have to unite our voices for good, embracing diversity and countering messages of hate with messages of peace.”

“We must reject those who maliciously invoke ‘faith’ to fuel division, to build misconceptions, and to spread fear and hatred,” she said. “We must be vigilant about attempts to use identity to restrict enjoyment of all rights by others, and to justify inequalities,” she said, adding that there was richness and strength in diversity that could weaken justification for believing that one’s perspective was superior to others.

“I believe that religious and ethnic diversity in Pakistan is impressive. But we have to understand that how do we really treat those who aren’t just like us,” she said. “We have to think that are we ready to a challenge of maintaining our society that actually respects others,” she asked.

“We have to sign an agreement for mutual respect and right to freedom of belief and the freedom to be a different derive,” she said.