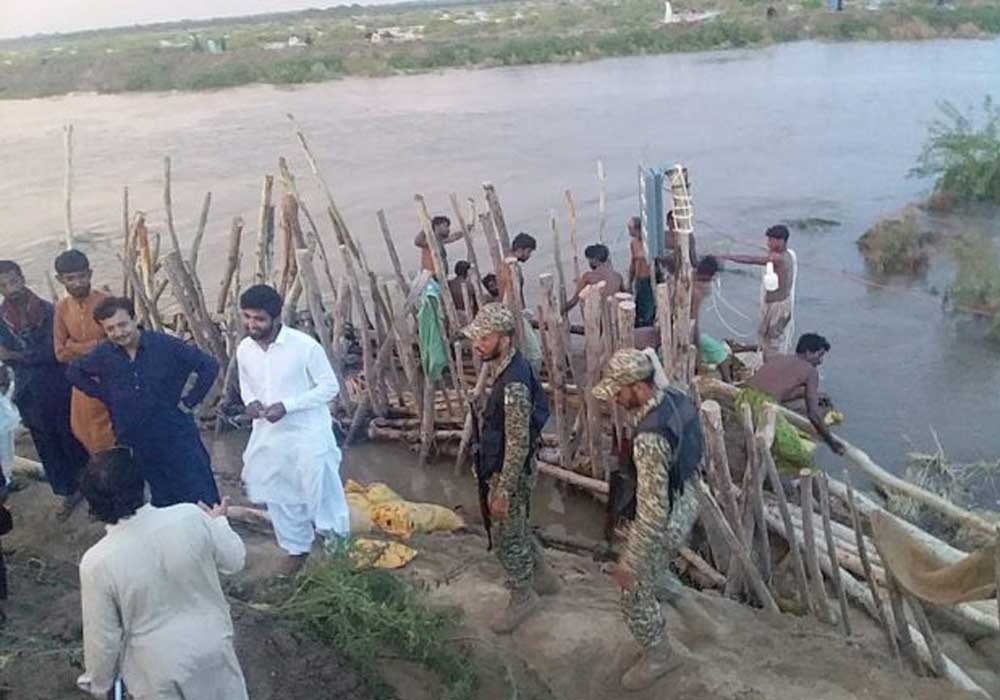 Tharparkar Deputy Commissioner Dr. Hafeez Ahmed Siyal along with irrigation officials on Monday reached the Zero Point area to administrator a relief cut to the dyke of the Left Bank Outfall Drain (LBOD) to release the pressure of increasing waters in the wake of continuous heavy downpour in various districts that have already been devastated by past floods.

Credible sources said high-ups of the Sindh government had tasked Dr Siyal with making cuts to the embankments of the deadly drain after Pakistan People’s Party (PPP) lawmakers from Mirpur Khas, Tharparkar and Badin districts came dagger drawn over the possible cut to divert the flows of water towards human settlements and farmlands to save bridges on important roads and sensitive installations.

The heavy contingents of police and paramilitary forces were deployed in the area after people from both sides announced to resist any move to cut its dykes even at the cost of their lives. The people, including women, from different areas of both districts, reached the site to foil the officials’ move to give the so-called relief cuts.

Arbab Lutufullah, the Thari PPP MPA and special assistant to the chief minister, sensing the possible strong backlash from the people of his home district Tharparkar and Badin, had opposed the proposal by influential Talpurs of Mirpur Khas and irrigation officials to cut the dykes at any point when it was overflowing some weeks back. The same sources added that in the wake new spell of the rains in districts of Shaheed Benazirabad and Mirpur Khas divisions, the water level rose again, leaving government functionaries with no other option but to cut dykes of the deadly drain.

The officials present there could not decide until late at night from which side of the drain could be cut to release the pressure of water. In case of an artificial breach on the right side of the LBOD, the deluge would inundate the barrages of Tharparkar, and in case of the cut towards its left side, the vast Badin district would come under deep waters and could cause further devastation in even towns and several hundred villages. Here, it is pertinent to mention that the mega project of the LBOD was meant to carry away the saline water of Shaheed Benazirabad, Sanghar, Umerkot and Badin towards the Arabian Sea with its designed capacity of 4,600 cusecs of water, but it was burst previously when floodwaters were released.

Every time (more than 10 times) since its inception in the early 1980s, the drain caused massive deaths and destruction in Mirpur Khas, barrage areas of Tharparkar and most parts of Tando Bago taluka of Badin district. Way back in 2003, the current of waters had swept away several people in the Behadmi area of Badin after high tides in the sea had forced the flows of water back to a vast area of the Badin district. The then president, General (r) Pervez Musharraf, during his visit to the breached sites had promised to overhaul the project but the announcement could not witness the implementation and allowed to wreak havoc every third or fourth year.