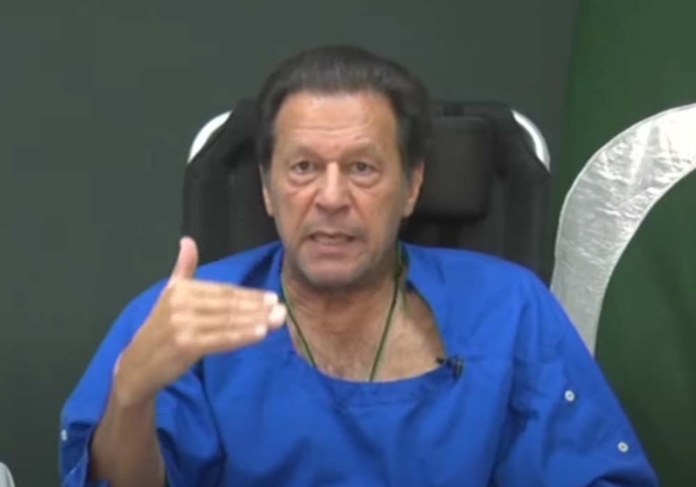 Former prime minister Imran Khan has said that PTI will resume the long march from Tuesday and he will join the movement when it reaches Rawalpindi in 10-14 days.

On Sunday, he said it’s been three days, and despite having a government in Punjab we failed to register a First Information Report (FIR).

According to the former prime minister, the police are ready to put the names of PM Shehbaz and Interior Minister Rana Sanaullah but not the army personnel.

He questioned whether all are equal under the law of this country. Saying that this is his right, and investigation will tell the truth.

Khan said, “I was shocked by the ISPR statement that I have accused one officer and the whole army is getting controversial because of that; however it’s not true, accountability helps organizations.”

Imran Khan welcomed Shehbaz Sharif’s statement of the judicial commission but asked, what the commission will do if the three people he named are heads of agencies where the investigation will take place.

He asserted that there is a pattern, first, a video surfaced where they accuse me of insulting religion, and then they do a press conference about it.

“I have repeated the whole conspiracy of using a religion card against me on multiple occasions but no action was taken.”

Imran also named a few journalists who tweeted in a matter of one minute to prove this attack was done by a religious fanatic.

He also demanded the CJP judicial commission to probe the Arshad Sharif case, the US cypher issue, and the Azam Swati case.

He said, “Everyone is saying the cypher was not real, then why is there no investigation on this? We announced commission when we were in government but since then there has been no progress.”

He urged the Supreme Court to investigate the Azam Swati case, where he was beaten by a person he named in a press conference on multiple occasions.

Khan said it was shameful when an unknown man sent a video to Azam Swati’s wife. Azam Swati called me at night and said he will sit outside the Supreme Court and protest until justice is done.

“Our senators and lawyers will join him and demand justice.”

He asked, where is this country heading, are we living in a banana republic where now some people are making husband and wife personal videos to blackmail them?

He said that our courts and judicial system need to protect our rights and dignity.