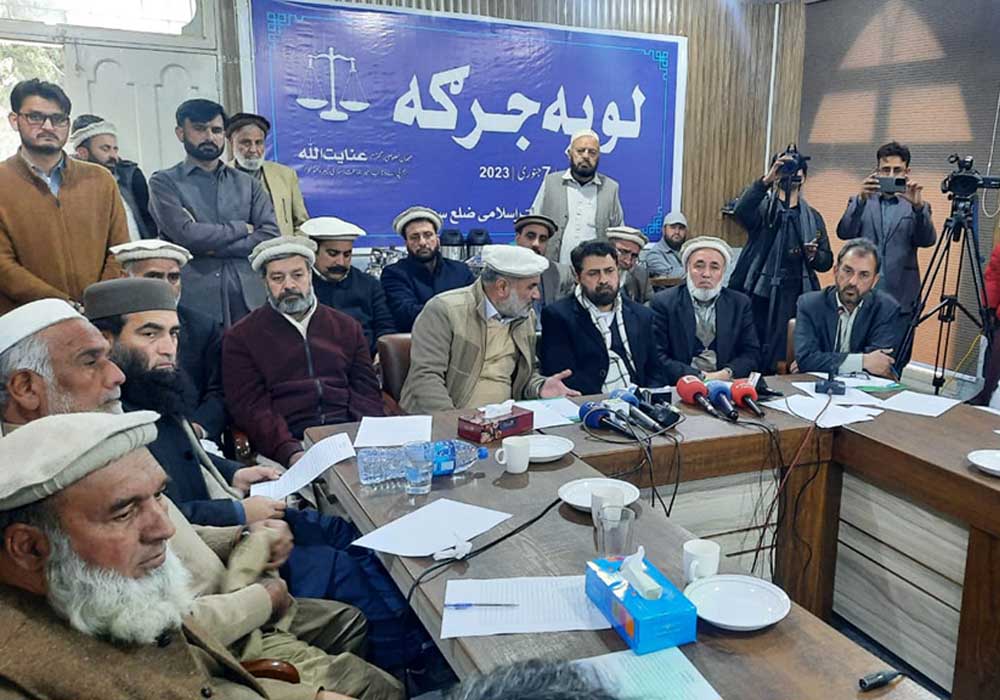 Elders and political leaders of all parties “Loya jirga” on Saturday demanded the government to restore the constitutional status of Malakand Division and extend the tax exemption for 10 years.

Leaders of all political parties, including lawyers, businessmen, civil society, leaders and elders from different schools of thought, participated in the meeting and discussed in detail the problems faced by the people of Malakand.

The Jirga members discussed various problems in detail, including peace and the region’s special status. After the meeting, a joint declaration was issued stating that despite being independent states till 1969, the people of all the states in the Malakand Division fought wars for the survival and security of Pakistan. “The people of Malakand Division also accepted the merger with Pakistan with an open heart and by accepting the integration in 1969 with Pakistan, the region was given a separate status under Article 246-247 and was declared a tax-free zone in the constitution,” they said.

They said that despite all these favours and sacrifices with Pakistan, the government, without taking the people and representatives of the area into confidence, the separate and special constitutional status of the Malakand Division was abolished. “We are not ready to accept this move of the government in any case and we demand that Malakand Division must be declared a tax-free zone for the next 10 years,” they said.

They said in the statement that Malakand Division generated 312 megawatts of electricity while work on 318 megawatts projects was underway, and another 1500 megawatts of electricity could be generated. “Despite 100% payment of the electricity bills, we are facing load shedding, which is unacceptable. Under the Forest Act 2022, the people of Malakand Division have been deprived of their ownership rights, but we make it clear to the government that we will not accept it in any case,” they said.

The declaration further stated that the people of Malakand Division were severely affected by the flood, earthquakes and militancy and we could not afford any more operations and unrest. Therefore the government must ensure law and order in any case.

They also demanded that for the people of the Malakand Division’s relief, the government must announce a special package for the people of the Malakand Division. “The cruel Forest Ordinance should also be withdrawn while practical measures should be taken for resettlement of flood-affected people otherwise, all political parties and social organizations will be forced to start protest movement along with civil society,” they said.

It was also clarified in the declaration that if the government did not accept the demands of the Loya Jirga, a large-scale protest movement would be launched, and the responsibility for the seriousness of the situation would fall on the government.