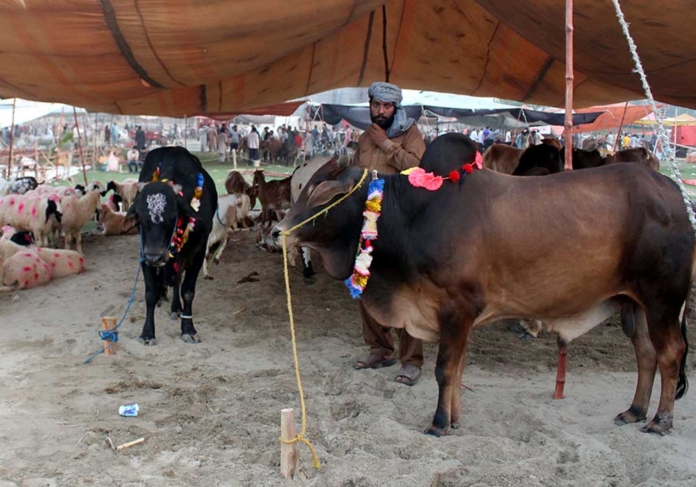 Lumpy skin disease (LSD) has killed hundreds and affected thousands of cattle in southern Punjab in the last few weeks, farmers in Burewala, Vehari, Bahawalnagar and other districts have told Minute Mirror.

Unavailability of treatment facilities and lack of awareness are the main reason behind the damage, depriving farmers of their main source of income days ahead of Eidul Azha. Livestock Department in south seems completely absent from the scene, it has been learnt. A student, Shahzada Ahsan, who on Sunday travelled from Rahim Yar Khan to Lahore on a train, said he had seen countless dead animals on the way alongside the rail track.

Adnan Buttar from Chak 509/EB tehsil Burewala of Vehari district said cows and bulls in every house and farm in his entire village were affected by the viral disease. “One or two cattle of every farmer are sick. Dozens died in the last few weeks. There is no qualified vet in our village. We are left to the mercy of God,” he said.

As the demand and prices of cattle go up ahead of Eidul Azha, Adnan said that for the first time in his life he is witnessing that no one was ready to purchase a bull or cow.

The normal price of a bull is between Rs100,000 to Rs130,000 but these days it is as low as Rs60,000 to Rs75,000, according to Adnan. A livestock farmer from village 108/15-L of tehsil Mianchannu, Muhmmad Hussain Arian, described the same situation while talking to Minute Mirror on phone. Rafaqat Siddhue from Behkanbodla village of Minchanabad tehsil of district Bahawalnagar said he had personally seen hundreds of cattle sick and dead in his area due to LSD.

Since the former Punjab government established a separate secretariat in south, Livestock Department also works under two secretaries. Dr. Asif Rafique, the spokesperson for Punjab (main) Livestock Department, said the situation was under control in upper districts. He said he could not comment on southern Punjab issue. Another official of the department said they had provided vaccine to south Punjab as per their demands.

LSD has badly hit the southern Punjab due to the transmission of virus from nearby areas of Sindh a couple of months ago. The disease has affected more than 40,000 cattle in Sindh, according to the provincial government. Media reported deaths of hundreds of animals in the province since October last year.

Primarily transmitted in cattle and water buffaloes by blood-feeding insects, the LSD’s clinical signs include the appearance of circular, firm nodes on the animal’s hide. They immediately start losing weight and have a reduced milk yield. Doctors say the mortality rate in LSD is one to five percent. Since its first outbreak in 1928 in Africa, no direct transmission of LSD to humans has been reported. Still, it is listed as a notifiable disease due to its social and economic impact on the places it spreads in.

A UN delegation had also visited Livestock Department Lahore weeks ago and was briefed about the situation. Officials insisted the department developed capacity to prepare one million doses per month to curtail the spread of disease, a claim contrary to the ground situation where farmers are either compelled to purchase expensive imported serum from private markets or they simply had no access to treatment.