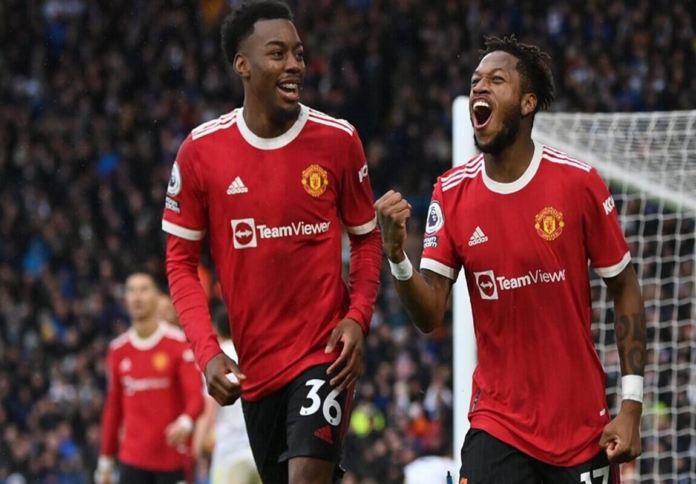 Ralf Rangnick said Manchester United’s fightback from blowing another half-time lead to beat Leeds 4-2 was the “best possible response” his side could give to reports of dressing room unrest.

Stories that Cristiano Ronaldo was set to replace Harry Maguire as United captain for the rest of the season were dismissed as “nonsense” by Rangnick this week.

Maguire responded by opening the scoring on 34 minutes before Bruno Fernandes added a second on the stroke of half-time.

Lost leads have been a feature of Rangnick’s interim spell in charge and United were punished for another slow start to a second half as Rodrigo’s fortunate cross and substitute Raphinha brought Leeds level.

This time, United bounced back to find a winner when Fred smashed in 20 minutes from time before Anthony Elanga sealed the points late on.

“Today it was important not only that we won the game but the way we reacted. That was the best possible response the team could give,” said Rangnick.

“A game like this one today you can only win as a team.”

On their first league visit to Elland Road in front of a capacity crowd in 19 years, the visitors were met with a hostile atmosphere and a tricky pitch in incessant rain.

United managed to weather the first Leeds storm to take control of the first half.

Maguire who broke the deadlock and United’s run of failing to score from a corner for more than a year with a powerful header from Luke Shaw’s delivery.

“I’m embarrassed by the stat,” said Maguire. “I’m a big part of that set play routine but as a team we’ve been nowhere near good enough. If we scored more from set pieces we’d be higher up the table.”

Five minutes into time added on at the end of the first half for a head injury to Robin Koch, United doubled their lead when Jadon Sancho’s inviting cross found Fernandes unmarked to head down past Ilan Meslier.

United had blown a half-time lead in three of their last four games, but on each occasion it had been a single-goal advantage. Leeds boss Marcelo Bielsa described keeping his club in the top-flight as “an obligation” this week but took the bold decision to drop top scorer Raphinha to the bench after subbing the Brazilian at half-time in last week’s 3-0 defeat at Everton. Bielsa swallowed his pride at the break to introduce Raphinha and Leeds were level within nine minutes of the restart thanks to two goals in 60 seconds.

Firstly Rodrigo’s cross flew over the head of David De Gea into the far corner. With the crowd still on their feet, Leeds scored again when Adam Forshaw’s strong challenge on Bruno Fernandes was not penalised and Daniel James’ cross was swept home by Raphinha at the back post.

As conditions continued to worsen under a torrential downpour, Rangnick turned to his bench in what appeared to be a bid to tighten up his midfield with the introduction of Fred for Paul Pogba. But it was the Brazilian who struck the winner as a wild game had another swing when he drilled home Sancho’s pass at the near post.

Another of Rangnick’s substitutes then ensured there would not be a second Leeds comeback as Elanga produced a calm finish after Fernandes had robbed Pascal Struijk.