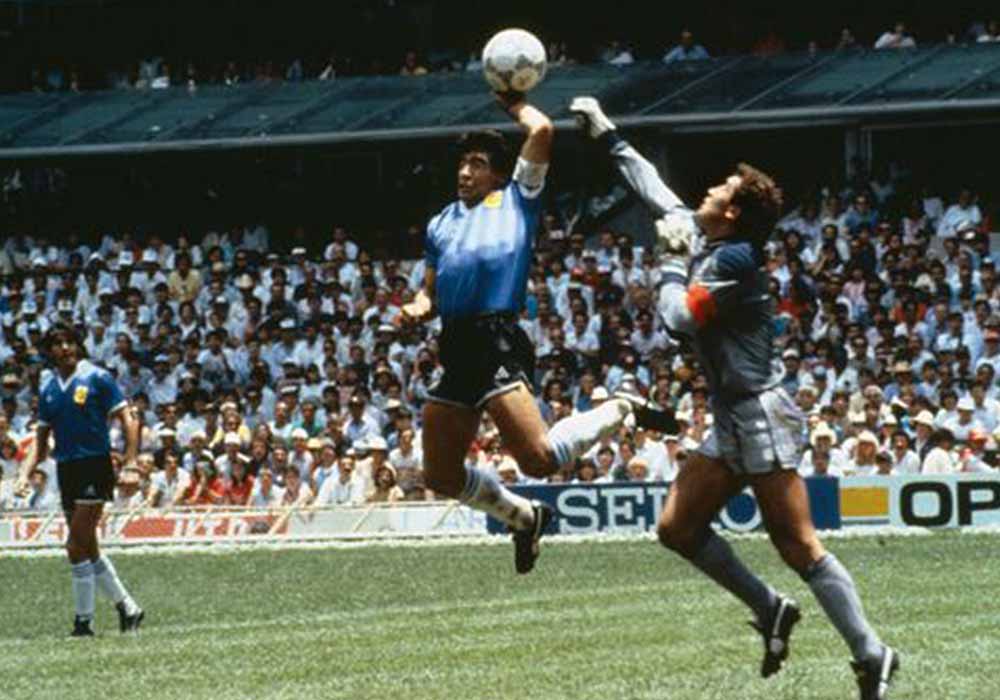 The jersey that Argentina football legend Diego Maradona wore while scoring twice against England in the 1986 World Cup, including the infamous “hand of God” goal, was auctioned for $9.3 million, a record for any item of sports memorabilia, Sotheby’s said Wednesday.

Seven bidders vied for the garment in an auction that began April 20 and ended Wednesday morning, Sotheby’s said, without releasing the name of the buyer.

“This historic shirt is a tangible reminder of an important moment not only in the history of sports but in the history of the 20th century,” Sotheby’s head of streetwear and modern collectibles Brahm Wachter said in a statement after the sale. “This is arguably the most coveted football shirt to ever come to auction, and so it is fitting that it now holds the auction record for any object of its kind,” he said.

The jersey had been owned by opposing midfielder Steve Hodge, who swapped his jersey with Maradona after England lost 2-1. Hodge, whose autobiography is titled “The man with Maradona’s shirt,” has for the past 20 years loaned the jersey to be on public display at the National Football Museum in Manchester.

The quarter-final showdown became etched in football lore for Maradona’s two goals – one notorious and one sublime – in Mexico City’s seething Aztec Stadium.

The first came shortly after half-time when Hodge, on the edge of the England penalty area, intercepted a pass and flicked the ball back towards goal.

Soon after, Maradona left five English defenders in his wake before gliding past Shilton and slotting home for a strike that was voted “Goal of the Century” in a 2002 FIFA poll.

Argentina went on to win the final and Maradona, who died from a heart attack in 2020, became worshipped in his home country. Maradona’s daughter cast doubt on the sale earlier this month when she claimed that the shirt put up for auction had been the one her father wore in the goal-less first half, not the second when he scored his two goals.

“This former player thinks he has my dad’s second-half jersey, but it’s a mix-up. He has the one from the first half,” his daughter Dalma said. Sotheby’s insisted they had the right shirt, though.

A Sotheby’s spokeswoman told AFP: “There was indeed a different shirt worn by Maradona in the first half, but there are clear differences between that and what was worn during the goals.

“And so, prior to putting this shirt for sale, we did extensive diligence and scientific research on the item to make sure it was the shirt worn by Maradona in the second half for the two goals.”

The photomatching process had involved matching the shirt “to both goals examining unique details on various elements of the item, including the patch, stripes, and numbering.”