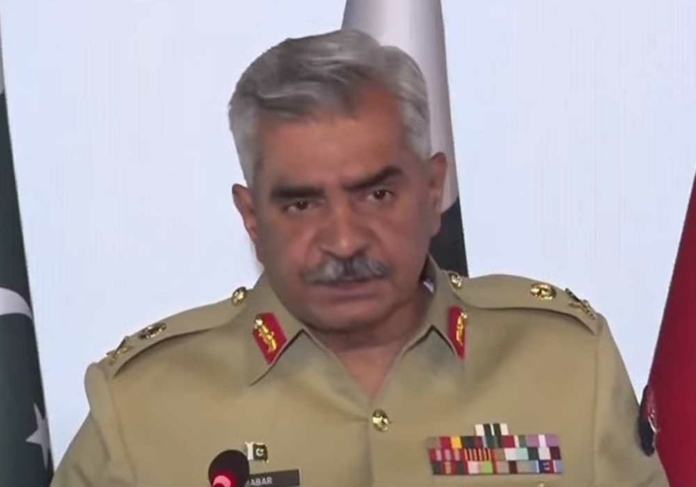 The Inter-Services Public Relations (ISPR) on Friday responded to the claims made by Imran Khan in his speech earlier in the day, saying the “baseless and irresponsible allegations” by the Pakistan Tehreek-e-Insaf (PTI) chairman against the institution and particularly a senior army officer are “absolutely unacceptable and uncalled for”.

It said the Pakistan Army prides itself on being an extremely professional and well-disciplined organisation with a robust and highly effective internal accountability system applicable across the board for unlawful acts, if any, committed by uniformed personnel.

“However, if the honour, safety and prestige of its rank and file is being tarnished by vested interests through frivolous allegations, the institution will jealousy safeguard its officers and soldiers no matter what,” it added.  “No one will be allowed to defame the institution or its soldiers with impunity.” Keeping this in view, the ISPR said, the government of Pakistan has been requested to investigate the matter and “initiate legal action against those responsible for defamation and false accusations against the institution and its officials without any evidence whatsoever”.

Meanwhile, Minister for Information and Broadcasting Marriyum Aurangzeb strongly condemned the vandalism, arson, and violence by the PTI workers in the wake of firing at Imran Khan the other day.

“Those who have attacked the state properties and set the country on fire cannot be its well-wishers,” she said in a statement. Referring to Imran Khan’s politics, she said the mindset of “foreign-funded Fitna” had polarised the nation.

On the other hand, Minister for Interior Rana Sanaullah Khan said that Imran was misleading the entire nation and youth of this country. “Imran is trying to create rift among masses,” he said while talking to a private news channel. The PTI chairman was “following the policy of agitation to disturb peaceful environment of this country”, he added.

Commenting on the Gujranwala firing incident, he said, it was the responsibility of joint investigation team (JIT) to compile report based evidence.

Also, Minister for Railways Khawaja Saad Rafique, addressing a press conference, said the JIT should include well-reputed officers from the federal and provincial agencies, investigating within a set timeframe and share all the facts with the nation. While rejecting the possible formation of one-sided JIT, Saad said that the JIT should have authority to interrogate anyone, including Imran Khan, and no interference should be allowed during the investigation process.

The minister said that all the political leadership not only strongly condemned the incident of firing but also prayed for the swift recovery of all wounded persons, including Imran Khan.

Saad said that the PML-N had no enmity with Imran Khan as there were only some political differences between both parties. Hatred in any form should be condemned by all of us, he added. The minister expressed shock over the reaction of the PTI leadership in the wake of the firing incident. There should be no politicking over such incidents which could lead to chaos and anarchy, he said. He said the Punjab government had not taken required measures despite the constant warnings from the federal and provincial law enforcement agencies regarding the security of Imran Khan.

The minister wondered where the security, police and administration of the provincial government were when the incident took place. He said one of the senators of the PTI had also given a statement that he already had information regarding a planned attack on Imran Khan. He also had conveyed it to the local leadership of PTI in Wazirabad, he said. agencies